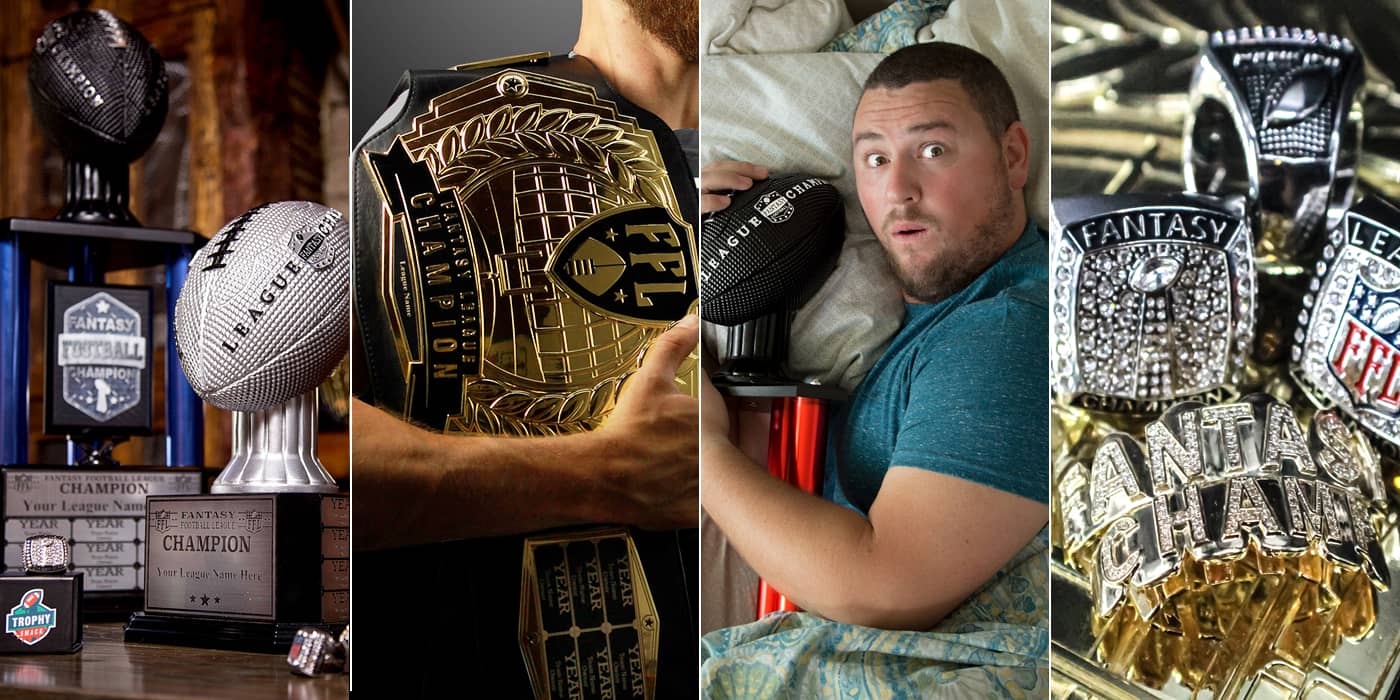 If your fantasy league is looking to up the ante beyond cash awards and bragging rights this season, the addition of a kickass fantasy football trophy is the answer. A champion’s trophy can tell your league mates, “I’m better than you are, and here’s the hardware to prove it!”

At the same time, for those fantasy-challenged, a loser’s trophy can be a lasting symbol of crushed dreams, injury-ruined seasons, or obvious ineptitude. For some, trying desperately to avoid taking home a marker of shame can make those last few games fun for everyone — even those whose playoff hopes were unceremoniously demolished in Week 8.

Upgrading your league’s gear is a task that shouldn’t be taken lightly, so take some time to review your options and see which trophy is right for you. The following are Gridiron Experts’ favorite Fantasy Football trophies. We also have some tips in this article for helping choose the best award if you’re undecided. 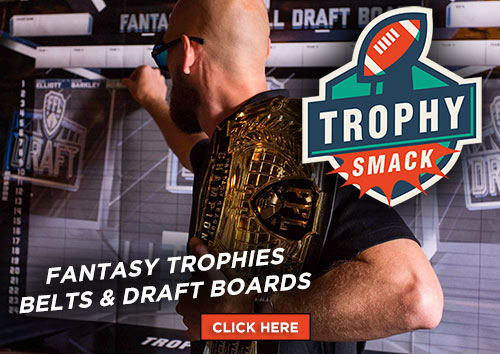 Truth: A Trophy Amps Your League

Most fantasy football fans will think getting a trophy as one of these elite awards is too much, overkill if you will. We here at Gridiron Experts know for a fact that cash prizes can come and go, yet an impressive fantasy football trophy is bragging rights for at least 8 months before the season starts up again.

Just think of the photos you can take. Throw a picture of you and one of these awesome awards on your Facebook page and let your league mates eat their heart out. You can even have fun with it, like the traveling gnome. Take photos of you taking your new friend around the city. Mock the league in good fun. There are hundreds of things you can do that will pester your league mates, but for some, just placing a trophy on your desk or mantle is good enough.

Having a Fantasy league crown also ups the level of competition. It creates a prize at the end of the season that you can hold up in the air with pride. I’ve read on Twitter many times that people think the guys on the show “The League” are amateur with their little eight-man league and season-end prize, but what drives that competitive force on the show? The Shiva. Your league needs a Shiva. Type symbol. Seriously, having a Trophy amps the league and takes things to the next level.

If you want to go big in a big way, and your league is okay with cutting into that pot of sweet prize money, look no further than these impressive trophies. 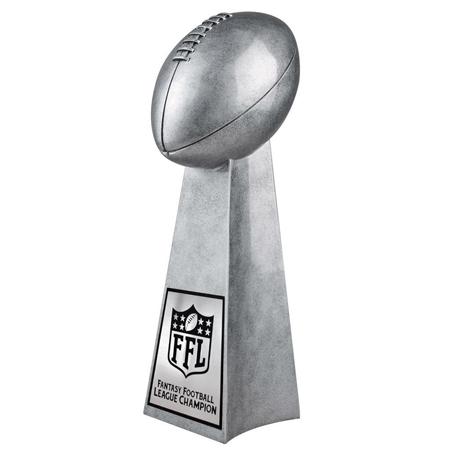 If your league has a competitive edge, and a long history of tradition, the Lombardi Trophy represents a true achievement. This is the kind of award that can be given out each year or passed along from winner to winner. I did find a similar trophy on Amazon, but it looks a little cheaper. This particular model is available at Fantasyjocks.com, which Gridiron Experts fully trusts, they are our top recommended source for trophies for your league. 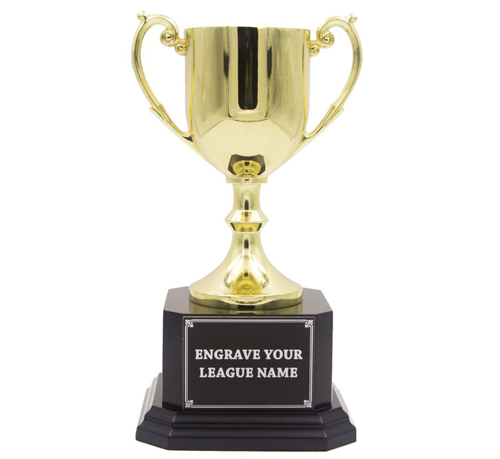 This is a more traditional-looking trophy. When you close your eyes and think of a big beautiful trophy, I don’t know about you, but this is what pops into my head. This is another recommendation from FantasyJocks, mainly because you can get a personalized engraving on the Fantasy Trophy. You could put the league name or the name and year in which the champ won. 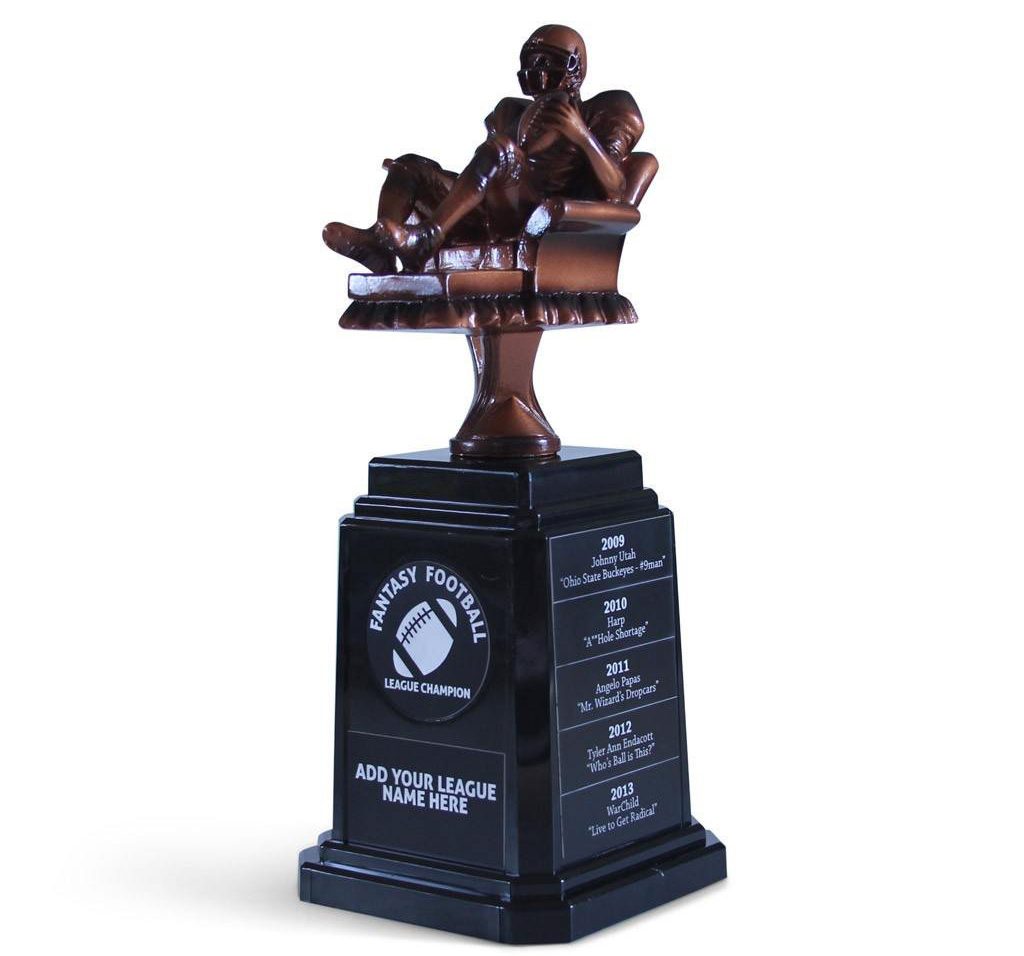 This trophy tells the story without having to ask. If it was sitting on someone’s desk, people passing by would know right away it was for Fantasy Football. The “armchair” stereotype expression doesn’t do fair justice to all the leaping out of the chair with each and every touchdown. I don’t know about you, but there have been many games where I have found myself pacing back and forth, a couple more points for a win. Nevertheless, this is a cool trophy, one perfect for any league format. 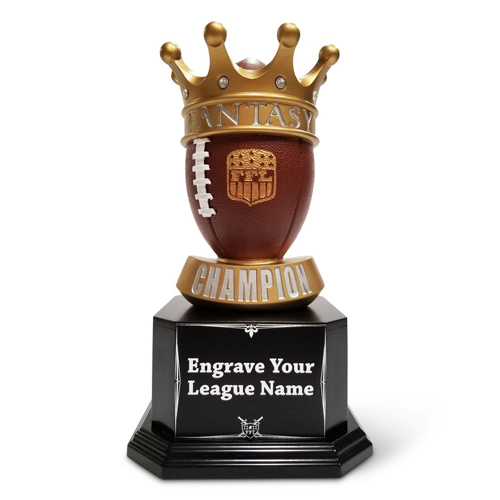 This fantasy football trophy to me, screams fun family league. My kids are too young to be in my long-time league but when they’re old enough, I could see them wanting this to be the championship prize that they get to pose with on Instagram or Facebook. This FF trophy is larger than it may appear and comes with plaque engraving.

Just look at this thing! This is not your run-of-the-mill Fantasy Football league trophy, this thing is for the big boys. I’m guessing those looking to put together a high-roller home or office league could grab this trophy and make it their league championship for years to come. It’s very professional and has tons of space to add past, present, and future champs to the trophy.

A Trophy Should Fit Your League

A collection of multiple championship trophies will tell everyone who enters your home that you are a winner. Of course, if you are consistently amazing, you run the risk of cluttering your house with “too many” awards … but isn’t that a risk you’re willing to take?

A few of these awards have places to add spots for future winners, yet the problem is you could outgrow them. The beer glass fantasy football trophy is pretty cool, as is the infamous armchair fantasy trophy. Both are unique in their own way and do fit the part. Yet, you need to decide what type of league your fantasy group is; it sounds funny but if you guys take things far too seriously then you’re going to want some elite hardware. The same could be said for a fun easy-going league. You shouldn’t overdo it if you have a great group of buddies or co-workers. Make sure you pick a fantasy trophy that best defines your league.

You want your league owners to want to yearn for the championship.

The Evolution of Fantasy Trophies: The Championship Belt

The Fantasy Football Championship Belt is the definition of a champion. It goes where you go and can make a hilarious appearance to ruin your league owners confidence throughout the year. Your league can also use the belt as a league theme, like old-school WWF wrestling. Each person takes on a persona like Jake the Snake, Macho Man or the Ultimate Warrior. This belt is a lot of fun and a pretty good value compared to the other trophies listed.

“Heads Up Losers: You Suck, Here’s Your Award”

When someone asks “Is that poop on the top of that trophy?” you reply: “Yes but the real crap was on his roster last season.”

Your league needs to award one of these prizes with some sort of humiliation punishment. Don’t go overboard, of course; we’re all friends here, but make sure to tack on some form of public announcement with the award. Make sure people are aware he/she was terrible. Although be a good girl, and have fun with it, you could be next ;)

All these fantasy football trophies can be found on Amazon. I researched a dozen or so trophy websites and most sell their product on Amazon due to their fast shipping. You could try to make your own using an old crappy football helmet of spend the day whittling wood, but time is money, and you’re better off just buying one and having it sent to your house.