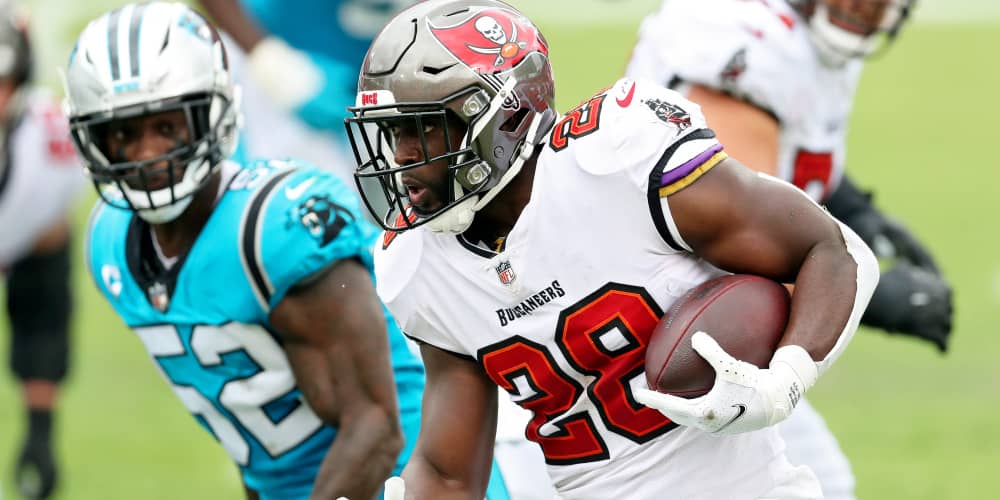 We are entering Week 15 of the 2020 NFL season, which means Week 2 of the Fantasy Football Playoffs. With injuries and COVID to deal with, here are my Top Week 15 Fantasy Sleepers to help you advance to the next round.

But first, here are the other NFL news, rumors, and injuries that could affect your fantasy football lineups for Week 15

The following is a recap of the players from my Fantasy Football Sleepers article last week, you can read that here.

Jared Goff is one of the most hot-and-cold quarterbacks in the NFL, but he usually shows up in favorable matchups. He gets the Jets this week. It doesn’t get much better than that. In two of his past four games, Goff has finished as the QB7 or better with 24.1+ fantasy points in both outings. And while Goff has only had one game with more than one TD pass in his past six outings since Week 8, he’s thrown for 300+ yards four times in that same six-game period.

Goff should be able to put together another complete game with big yards and a few scores this week facing a Jets defense surrendering the second-most FPPG (23.0) to QBs. The Jets are tied for first for most TDs allowed to a QB this season (28), which is just the matchup Goff needs for another QB1 finish. The Jets have allowed a QB to throw for 3+ scores in three of their past four games.

Philip Rivers has had a terrific season. it has been his best year since 2018. Expect that to continue this week against the Texans. In Rivers’ first matchup with the Texans back in Week 13, he finished as the QB14 with 19.2 fantasy points on a 285/2/0 QB stat line. While Rivers has not had a game with 20+ fantasy points in each of his past three, he has a shot to get there on Sunday. Rivers has thrown for fewer than 295 yards in each of his past four games but has thrown 2+ TDs in those outings, salvaging his outings for his fantasy managers.

The Texans are yielding the 11th most FPPG (19.8) to QBs this season. They have also allowed an enemy signal-caller to pop for 20+ fantasy points in four of their past eight games, including last week’s outing in which they let Mitchell Trubisky drop 267 yards and three TDs on them, good for 25 points. With T.Y. Hilton, who you see later in this article, red hot, Rivers should bring a respectable floor with a high ceiling in Week 15.

Raheem Mostert has been limited all week at practice with an ankle injury. And whether or not he plays against the Cowboys on Sunday, Jeff Wilson should be in all lineups. While Mostert has a combined 39 attempts for 150 yards and a TD in three games since Week 12, Wilson went for 118 yards and a TD on 30 carries in that same period. Wilson added another 25 yards on 3-of-8 targets while Mostert had a 5/6/0 line on 7 targets in that timespan. This is no longer Mostert’s backfield. Wilson is quietly emerging.

Facing a Cowboys defense surrendering the most sixth-most FPPG (21.0) to RBs, Wilson could have a big game. The Cowboys have allowed 10+ PPR points to four different backs since Week 11. They are also allowing the second-most rushing yards (1,727) and the third most TDs (13) to the position this season. Although both Mostert and Wilson will be utilized assuming the former plays, I like Wilson for his scoring upside in Week 15. Mostert has three red zone carries in his past three games to Wilson’s six, seeing three in each of his past two outings.

Since Ronald Jones is sidelined on the reserve/ COVID list, Leonard Fournette, who was a healthy scratch last week, is expected to lead Tampa’s backfield. Sure, LeSean McCoy and Ke’Shawn Vaughn could also steal touches, but this should be a Fournette game. While Jones has taken a stranglehold on the Buccaneers’ backfield this season, Fournette could still be productive when he is getting the usage. Fournette has managed 10+ PPR points in 4-of-9 games this season. Out of those games, he had one RB15 finish back in Week 7 (15.7 PPR) and an RB3 finish back in Week 2 (27.6 PPR). In each of his past three games, Fournette has finished with fewer than 9.6 PPR points with one TD in that period. He’s also only had one game with 10+ touches since Week 8.

The good news, Jones is out of the picture which means Fournette will likely see enough touches to bring a respectable 10+ PPR point floor with a big-time ceiling if he gets going and plays like the player of old. He will face a Falcons defense allowing the fourth-fewest FPPG (14.6) to RBs. While the matchup is not great on paper, Fournette should be able to provide as long as he gets volume. The Falcons allowed 17+ PPR points to their opponent’s top-scoring RB in each of their past two games.

The Dolphins are hurting for healthy pass-catchers. While DeVante Parker, Mike Gesicki, and Jakeem Grant have yet to be ruled out, they could be limited with their respective injuries, which opens the door for Lynn Bowden Jr. In his past two games, Bowden has seen his most playing time of the season. In those two outings since Week 13, Bowden had 4+ targets, 4+ receptions, and 41+ yards, topping out with a 7/82/0 line on nine targets last week. Bowden also accumulated 9.2 PPR points in Week 13 and 15.4 last week.

The hybrid RB/ WR should once again be busy this week as Miami may have to pull out all the stops to beat the Patriots. Sure, the Dolphins are the better team, but we know what Bill Belichick can do to rookie QBs. I only like Bowden in PPR scoring formats. He can be faded in standard.

T.Y. Hilton has come alive in the second half of the year. In three games since Week 12, Hilton has 18+ PPR points, going over 20 in each of his past two outings. Hilton finished as the WR17,6,5 in the past three games since Week 12 consecutively. The once top-end wideout has also drawn 5+ targets, 4+ receptions, 81+ yards, and 1+ TD in those three games. He is finally showing a rapport with Philip Rivers. Along with scoring four times in his past three games, Hilton also recorded one outing with 100+ yards.

On Sunday, Hilton gets a Texans defense yielding the ninth-most FPPG (25.9) to WRs. In his career, Hilton has dominated Houston. In six of his past nine games against the Texans, including his Week 13 meeting from this season, Hilton has gone for 100+ yards or a TD. Hilton should pop four his fourth straight game in Week 15.

While on the road, Davis will get a Broncos secondary that is all sorts of banged up. Kevin Toliver, A.J. Bouye, Bryce Callahan and Duke Dawson Jr. are all ruled out due to their respective injuries for suspensions. Josh Allen and the Bills’ aerial attack should ball out facing a Denver defense allowing eight fewest FPPG (22.1) to WRs. But keep in mind again, the Broncos’ secondary is missing four key players.

Chad Hansen has played in the past two games for the Texans, a team that desperately needs help at receiver. In his two outings with the team, Hansen has finished with 12.6+ PPR points. Hansen has played in 78.9% of the team’s offensive snaps and has run 32+ routes in those two games as well. Hansen is also getting used, seeing 7+ targets, 5+ receptions, and 51+ yards in both outings since Week 13. Remarkably, Hansen went for 101 yards in Week 13, his first game of the season.

While I don’t love the matchup with a Colts defense allowing the 11th fewest FPPG (22.1) to WRs, when a player is getting 7+ targets a game, he is a quality play in PPR scoring formats. The Colts have given up a 53/929/3 line to enemy wideouts in the past five weeks. They have allowed eight different WRs to accumulate 10+ PPR points on them in those five games since Week 10.

While Jimmy Graham was employed as the primary tight end on the Bears for most of the year, Cole Kmet is quietly emerging past him. In each of the past four games, Kmet has had a higher snap percentage than Graham, playing in at least 68.4% of them since Week 10 while Graham has played in fewer than 62.5% of them in that same period. Kmet is also running more routes than Graham. While they both ran 14 routes in Week 10, Kmet has run 24+ routes in each of his past three outings compared to Graham, who ran fewer than 17 routes in that period.

In each of his past two games, Kmet has drawn at least seven targets while Graham has drawn fewer than four, including zero back in Week 13. While Graham scored last week and finished with 12.8 PPR points, Kmet was the tE8 with 14.7 PPR points in Week 13. Sure, both players are close, but Kmet is dominating un usage. That trend will continue in Week 15 facing a Vikings defense surrendering the 16th most FPPG (7.6) to TEs. The Vikings have allowed a TE to score a TD in five of their past nine games, including a 1/2/1 line on two targets to Rob Gronkowski last week.

With Kyle Rudolph set to miss his second straight game with a foot injury, Irv Smith Jr. will act as the primary pass-catching tight end for Kirk Cousins. While Smith has missed time in his own right with a groin issue, he has plated well in his past few games before and following the injury. In two of his past three games, Smith has scored a total of three touchdowns, He caught 2-of-4 targets for 10 yards and two scores back in Week 9 while accumulating a 4/63/1 line on four targets in Week 14’s loss to Tampa Bay.

Smith will look to maintain his scoring momentum on Sunday getting a Bears defense that has been pummelled by the tight end in 2020. The Bears are allowing the fourth-most FPPG (9.9) to enemy TEs in 2020 on the second-most receptions (74), the seventh most yards (762), and the third most TDs (9). The Bears have allowed an opposing TE to score 10+ PPR points in six of their past seven games, failing to let that happen last week.

Thank you for reading my Week 15 Fantasy Football Sleepers.

Anthony Cervino is a lifelong NFL enthusiast, especially of the Dallas Cowboys. He has been infatuated with the game since childhood and was introduced to fantasy football as a young teen. Back then, the league commissioner typed out the weekly newsletter and used the Daily News to tally scores. In a statistic-driven game of fantasy football, Anthony believes that sometimes you have to rely on that good ole gut instinct. Anthony resides in New Jersey where he lives with his wife, son and a pomeranian that is named Roman (after Tony Romo). When Anthony is not immersed in the NFL or fantasy football related activities, he enjoys bodybuilding and spending time with his family. Anthony is committed to giving you his best analysis and most accurate statistics to help you win championships. Don’t hesitate to tweet Anthony @therealnflguru about anything NFL or fantasy-related topics. He will always respond in a timely fashion.