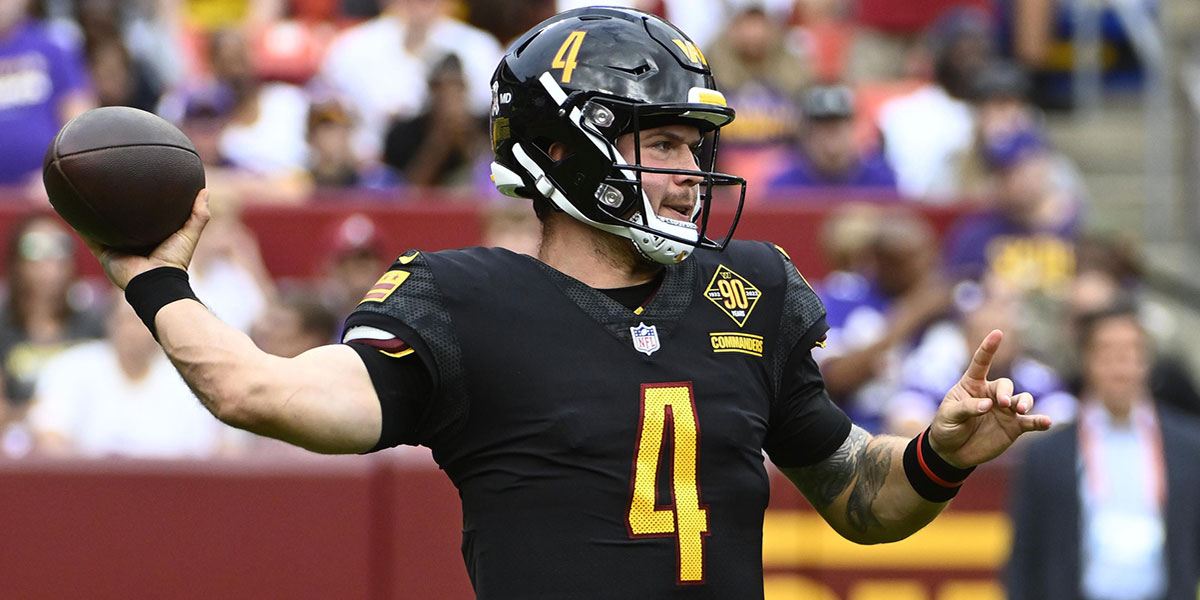 The NFL’s popularity keeps gaining traction and Fantasy Football fans know that following the matches live is an essential step to keep up to date with what goes on. But just like with live gambling games and many other forms of live entertainment, the main goal should always be to have fun and enjoy it.

As the 2022 season is wrapping up, we are fine-tuning our rosters to help us get into the playoffs to win a championship. With numerous injuries that occurred in week 10, NFL rosters have been shaken up a bit. Also, a few fresh faces have started to shine for their team and will have plenty of opportunities to score fantasy points in the coming weeks. Take advantage and pick up the following sleeper players if you have not already.

Earlier in the week, Coach Ron Rivera spoke with the media about which quarterback he was going to start in Sunday’s match-up against Houston and stated, “You have to look at the momentum and what the mood of the team is” and “There are a lot of factors.” My theory is if it is not broken, don’t fix it. I was very impressed with the way Heinicke played against Philadelphia this past Monday night and not starting him again would be a major mistake. Against an inconsistent Texans’ defense, I believe Heinicke will perform well and put-up double-digit numbers. When it comes to talent at the wide receiver position including Terry McLaurin and Curtis Samuel, I expect Heinicke to throw a few touchdowns this week resulting in him becoming a solid QB2 in week 11.

Edwards is returning to the lineup after sitting out the past few weeks with an injured hamstring. The Ravens are eager to get him back on the field, especially as their rushing attack is not as consistent without him. I believe that Coach John Harbaugh will implement Edwards in the game plan for Sunday knowing that the Panthers’ rushing defense is one of the worst in the league allowing 1,392 rushing yards and 12 touchdowns. The Panthers’ defense also allows 20.5 fantasy points to opposing running backs on average giving Edwards the opportunity to absolutely light up the Panthers’ defense in his return becoming a low-end RB1 this week for fantasy teams in week 11.

The Vikings have been playing well on offense so far this season and I do not expect them to take their foot off the gas anytime soon. Thielen has been getting consistently targeted every game which will eventually allow him to break out toward the end of the season. Against the Cowboys’ defense who allowed the Packers offense to score multiple passing touchdowns last week, there is no reason why the Vikings will not do the same. The Cowboys’ defense allows on average 20.2 fantasy points per game to opposing wide receivers, enabling Thielen to become even more of an asset to the Vikings’ offense. Another reason why Thielen is a sleeper this week is because cornerback Trevon Diggs will be shadowing Justin Jefferson the entire game allowing Thielen to become a solid WR2 in week 11.

In week 10 Carter led the team in yards receiving with 64 on 4 receptions and scored 1 touchdown to cap it off. With the absence of fellow receivers Mike Williams and Keenan Allen in recent weeks, Carter has seen a lot of playing time and is making the most of it. The most recent news regarding the two-star receivers for Los Angeles is that they both are practicing this week in a limited fashion. I believe even if Williams and Allen play this week, they will not perform as well as they are just coming back from injuries that cost them multiple games and the Chargers’ offense will rely on the receivers that have been taking reps with the first team offense the past few weeks including Carter. Against the Chiefs’ defense that on average allows 23.2 fantasy points per game to wide receivers, I expect Carter to become a solid WR3 in week 11 against Kansas City in a rematch from week 2.

McBride will officially start at the tight end position for the first time in his career this week against San Francisco. In week 11 starter Zach Ertz went down with a knee injury that landed him on injured reserve ending his season immediately. McBride was heavily praised during the 2022 NFL Draft notably for being one of the best rookies at his position. I am excited to see what the rookie can do on this high-powered offense and what Coach Kliff Kingsbury has planned for him. No matter what quarterback starts for Arizona Monday night against the 49ers, I believe McBride will perform well proving to the coaching staff that they made the right choice by drafting him in the 3rd round. I expect McBride to become a high-end TE3 with the possibility of becoming a low-end TE2 in week 11.

The top breaking news around the league this week is star wide receiver Cooper Kupp’s ankle injury that landed him on injured reserve and ended his season. This opens the door for Higbee who performed well last week securing 8 receptions for 73 yards. The sky is the limit for the veteran tight end to finally break out and show that he is one of the best tight ends in the league. Higbee is usually not the first tight end fantasy team owners look at during the week for a streamer, but now that Kupp is out, it is time to consider Higbee to be a starter for your team for the rest of the season, especially with injuries to Zach Ertz and Dallas Goedert. I expect Higbee to become a solid TE2 against New Orleans in week 11.