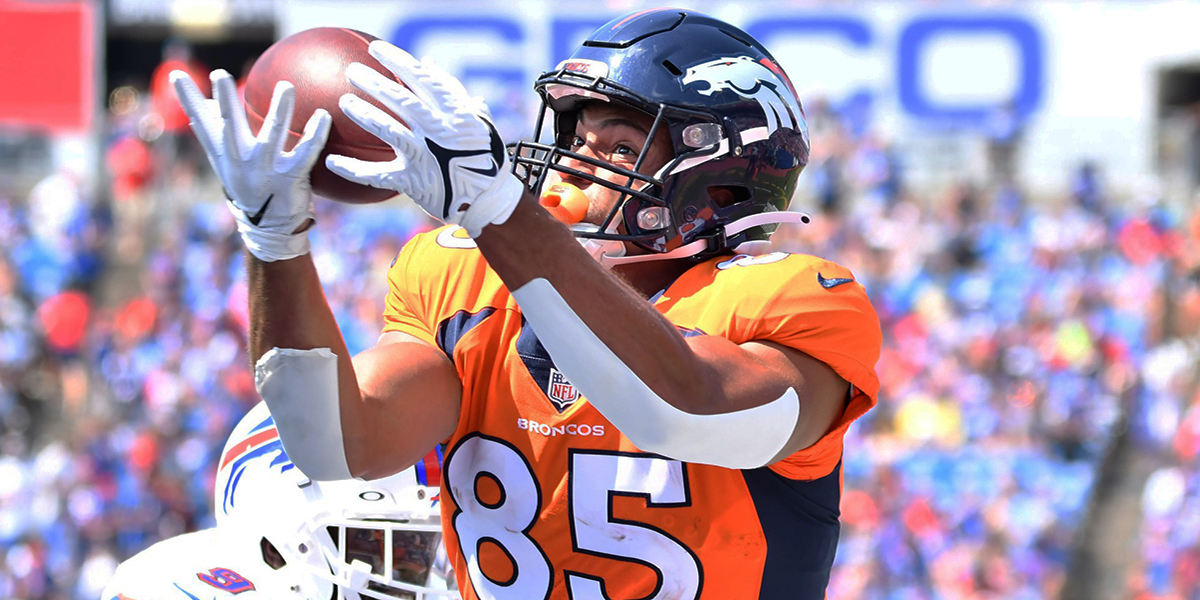 You may find yourself staring at your bench wondering what sleeper pick you are going to insert into your lineup that will help you win your matchup. The dark horses, wildcards, or undervalued players this week you may say, but these players in actuality are solid starts in their respective matchups.  These eight players I have selected below are well-positioned to perform well this weekend. Here are my recommendations for fantasy football sleepers week 1.

The 49ers have handed over the reins to the second-year quarterback from North Dakota State. It has always been the plan to start Lance, since drafting him 3rd overall in the 2021 NFL Draft. Lance is equipped with plenty of receiving weapons including Deebo Samuel, George Kittle, and Brandon Aiyuk. The Bears defense gave up an average of 20.5 fantasy points per game to opposing quarterbacks last season. Lance looks to clinch his first win as the official starting quarterback for the Niners this season. Lance is a high-end QB2 at his floor, with the potential to become a low-end QB1 at his ceiling.

The Raiders have confidence in Carr as he officially became their franchise quarterback by giving him a major contract extension and reuniting him with All-Pro receiver Davante Adams after trading with the Packers to acquire Adams during the offseason. Carr and company battle the Chargers in a potential shootout matchup. The Chargers allowed opposing quarterbacks to score an average of 19.7 fantasy points per game last season. Take note that cornerback J.C. Jackson is not expected to play this week while recovering from ankle surgery. Carr will look to air the ball out to his elite receiving core including Davante Adams, Hunter Renfrow, and Darren Waller this weekend as he will look to make a statement to the rest of the NFL that the Raiders are for real. Carr is a high-end QB2 this week.

The Patriots running back situation has been a popular and interesting topic during the offseason. Second-year running back Rhamondre Stevenson contains the size, athleticism, and explosiveness to become a well-rounded and reliable running back. He is part of a Patriots running back duo that includes veteran Damien Harris who only is used on early downs. Stevenson’s advantage over Harris is his ability to be used in the passing game as he possesses good hands and pass-catching skills. The Dolphins allowed an average of 15.6 fantasy points per game to opposing running backs last season. Stevenson is a low-end RB2 this week as his floor with the potential of becoming a high-end RB2 as his ceiling.

Dillon is looking to make a big leap this season after Coach LaFleur stated that the Packers have two starting running backs in Aaron Jones and A.J. Dillon and labeled them as 1A and 1A. Dillon is a power back that will be used on third downs and in goal-line situations this season. With veteran wide receiver Allen Lazard questionable to play this weekend, the Packers may rely on the running game for the vast majority of their time on offense. The Vikings defense gave up an average of 18.2 fantasy points per game to opposing running backs last season. Dillon is a low-end RB2 this week.

Bateman claimed the number 1 receiving spot after the Ravens traded Marquise “Hollywood” Brown this offseason to the Cardinals. On Wednesday, news broke that 2019 MVP Ravens quarterback Lamar Jackson expects his contract to be resolved by Friday. I do not believe this will impact Jackson’s decision to play this season if he does not receive a new contract by then. The pairing of Jackson and Bateman will be a force to be reckoned with this season as Bateman possesses big play ability. The second-year x receiver will face off against first-round rookie right cornerback Ahmad “Sauce” Gardner. The Jets’ defense allowed 19.9 fantasy points to opposing wide receivers last season. Jackson will look to take advantage of the matchup against the rookie corner as Gardner will play in his first regular season game this weekend. Bateman looks to prove that he is the alpha receiver in Baltimore. Bateman is a low-end WR1 this week.

The veteran slot receiver found a new home in Jacksonville this off-season. Kirk looks to help a struggling Jaguars offense by becoming a reliable weapon and possibly second-year quarterback Trevor Lawrence’s favorite receiver. Lawrence will not face as much pressure from the Commanders defensive line as 2020 NFL Defensive Rookie of the Year Chase Young is still on the physically unable to perform list. Kirk’s ability to get open over the middle of the field will allow him to accumulate yards after the catch, resulting in more points scored for fantasy owners this season. Kirk who is the primary slot receiver will be lined up against Commanders slot cornerback Benjamin St-Juste, who was part of a Commanders defense that allowed an average of 22.5 fantasy points per game last season to opposing wide receivers. Kirk is a low-end WR2 this week.

The third-year tight end finally became the starter for the Broncos after former starter Noah Fant was traded to the Seahawks in a deal that brought Super Bowl XLVIII Champion quarterback Russell Wilson to the Denver Broncos this offseason. It is now Okwuegbunam’s time to showcase his talents by becoming a reliable red zone target as the Seahawks defense allowed opposing tight ends to score an average of 8.5 fantasy points per game. Okwuegbunam is a low-end TE2 this week.

Hines has been the go-to pass-catching back in Indianapolis for quite some time. Coach Reich stated last week that Hines would have a much bigger role this season, as they would like to rotate running backs to preserve Pro-Bowl running back Jonathan Taylor’s health for down the stretch during a long season. This will likely happen as Pro-Bowl quarterback Matt Ryan likes to check the ball down on certain plays to move the ball down the field during a long drive. Hines will be an essential part of the Colts running and passing game this week against a Texans defense that gave up 20.2 fantasy points to opposing running backs last season. Hines is a solid flex option this week.