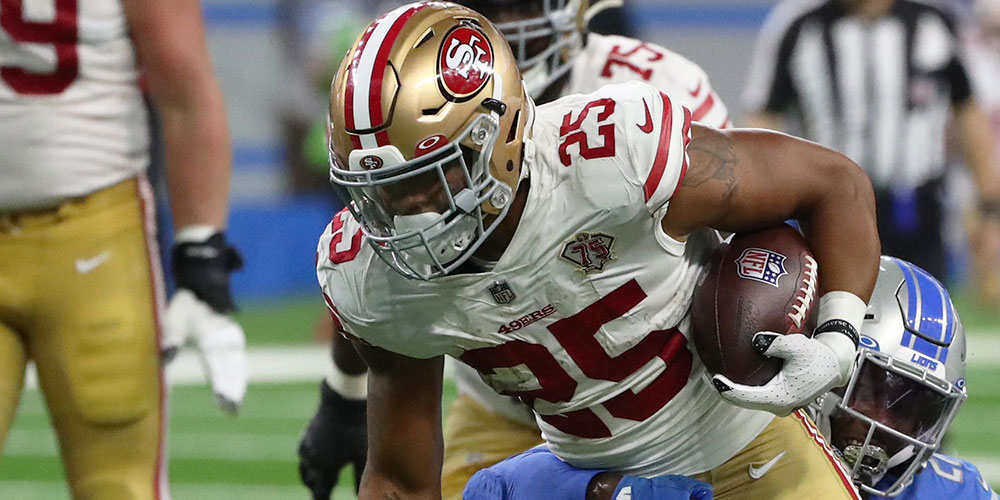 If you are lucky enough to have Derrick Henry, good for you! What follows is for the rest of us that are wading through injuries, bye weeks, and some general disappointment trying to fill our running back position. This is a look into the murky backfields of the league in an attempt to clear things up for you. Put your goggles on and let’s dive into the RBBC Breakdown for Week 8!

Before we jump into the numbers a quick note about the data: The data that I use is populated by the Snap Counts page from FantasyData. I then take this raw data and calculate not just whether an RB was on the field but if they were being used and what percentage of the offense did their usage make up. Looking back at the entire season of 2020 (you can find old RBBC Reviews on my profile page), the two stats that I include and lean on heavily, % of Offense and Plays Used, were more correlated with season-long PPR points than Snaps and Snap %. For example, 94% of end-of-year fantasy points can be explained by the number of plays that a player is used – when a player is actually used more it results in more fantasy points. So, if a player is being used on a lot of plays but isn’t producing fantasy points yet, there is a likelihood that he will regress to the mean in future games and produce more fantasy points.

A ‘workhorse’ is defined here as a running back that is responsible for over 30% of their team’s offensive plays. The chart below highlights these workhorse backs and shows how they rank in fantasy points. Of the five workhorse backs, who haven’t missed time to injury, all five are in the top-15 in PPR scoring. Once again, good for you if you own Derrick Henry! He is not only leading all rushers in percent of offense with 42% but he is leading in fantasy points by a margin of almost 50 points. All the other workhorse backs have over 100 PPR points and are must-starts in your fantasy lineups.

Most people have been avoiding the Texans rushing offense with good reason. However, with the recent trade of Mark Ingram to the New Orleans Saints the door is open for David Johnson or Phillip Lindsay. Currently, both Johnson and Lindsay are almost even in plays used with Johnson with slightly more plays but a significant edge in PPR points. The return of Tyrod Taylor should also help the Texans’ offense get on track. I wouldn’t recommend firing up Johnson as anything more than an RB3/Flex. Lindsay is a desperation waiver add to see what shakes out but shouldn’t be in lineups.

The New England Patriots have a history of being one of the most difficult teams to anticipate what they are going to do with their running backs. Week 7 continued this trend. Coming into Week 7 Rhamondre Steveson had back-to-back games of over 15% of the offense. So his Week 7 healthy scratch was a headscratcher. Branden Boldin returned to his roughly 10% of the offense. JJ Taylor took advantage of his increased snaps to the tune of 13% of the offense and 15 PPR points. It is worth noting that this came against the woeful New York Jets. Moving forward Damien Harris is a consistent start. Branden Bolden can be sprinkled into lineups as need and JJ Taylor is a worthwhile hold to see how things shake out. Stevenson shouldn’t be dropped immediately unless space is needed on the roster.

The Eagles rushers have been a rollercoaster all season long. All three rushers combined are averaging less than 14 attempts per game. Quarterback Jalen Hurts for comparison is leading most rushing categories including attempts per game at 9.7. With the injury to Miles Sanders, many people are excited to see what rookie Kenneth Gainwell will do with the increased opportunities. The downside is the lack of overall opportunities for the rushers in Philly. Over the past four weeks, only one week saw Philly’s runners combine for over 30% of the team’s offense. Gainwell looks the part but there is just not enough work to feel confident about starting him. Boston Scott has also been scooped up off of waivers but he is a bench stash at best.

Head Coach Kyle Shanahan had gained a reputation for putting together a formidable rushing attack. Unfortunately, it has been a system that can interchange the rushers with ease. History is repeating itself this season as the San Fran rushing attack is producing fantasy points however it is spread across the multitude of rushers. So Week 7 was a pleasant surprise that all of the fantasy points were shared by only two rushers Elijah Mitchell, who has solidified his place atop the depth chart, and recently healthy JaMycal Hasty. Shockingly Trey Sermon was a no-show after filling in while Mitchell was nursing an injury. Mitchell is the obvious choice for back to own. Hasty and Sermon are bench stashes with Hasty holding a little more value especially if he can build off of his 19 snaps and 9 plays used.