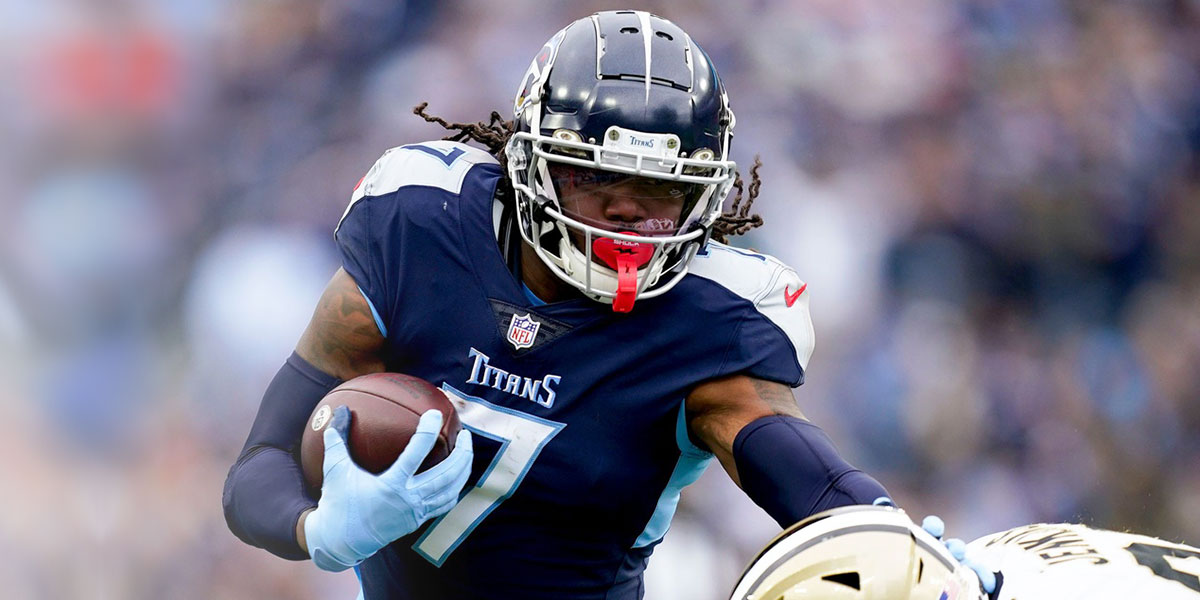 This year is turning out to be the year of rotating running backs. It seems like every week we have another “stud” rusher on the bench and a new name to debate whether they deserve time in next week’s starting lineup. This series aims to be ahead of these changes as much as possible by diving into who is being used by their respective offense. Last week’s column mentioned the potential for D’Onta Foreman to get more work for the Titans and we saw that play out in Week 10. What kind of insights do we have this week? Keep reading to find out.

This week is another reminder that ‘percent of offense’ is directly tied to fantasy production. As the chart below clearly shows, the top fantasy rushers are also the players with significant percentages of their respective offenses. Of the eight running backs with over 30% of the offense, five of them are in the top-10 in PPR scoring. Two of the three not in the top-10 have only played five games (Christian McCaffrey and David Montgomery) and the other is Dalvin Cook, currently in 22nd  place despite only playing 7 games. Cordarrelle Patterson is the only rusher scoring in the top-10 in PPR with less than 25% of his team’s offense. 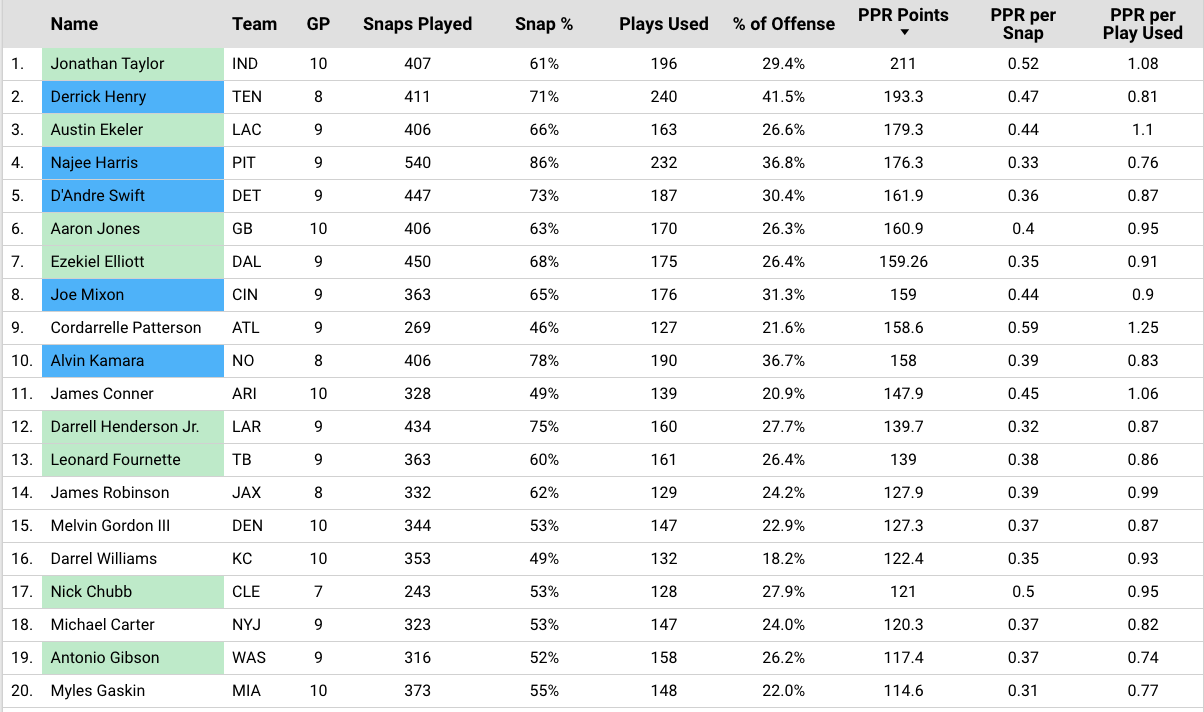 Week 10 saw the breakout of Rhamondre Stevenson. However, it took a concussion to Damien Harris in order to clear the way for the increased role of Stevenson. Harris has been cleared to play Week 11. This raised the question, “who is going to lead the Pats’ backfield?” The answer will probably upset fantasy managers as the most likely solution will be a timeshare between the two backs.  More about predicting the future with Rhamondre and Harris than looking back at Week 10. Stevenson is a must-have in fantasy but is going to be difficult to start outside of high-risk/high-reward situations. Harris is a safe play as the “lead” back but he may be eased back into action against a porous Falcons defense. I’m not excited to start either but they could be played as flex options with some confidence.

Miles Sanders is expected back and saw greater than 20% offense 4 of the 6 games before his injury. Howard has lost efficiency each week since his stellar return in Week 8.  Boston Scott remains a factor as well considering he has averaged 19% of the offense over the past three weeks. Who will prevail? I expect Sanders to regain his role as the “starter” for the Eagles. The issue is the title carries little weight for fantasy rosters. There is also the possibility, moving closer to likelihood, that Sanders will miss Week 11. This could be one final chance for Howard or Scott to prove themselves. Against the third-best defense against the run, the Saints, none of these rushers garner a start outside of the most desperate of plays. However, Week 12’s matchup against the juicy Giants will be one to target if you can figure out the backfield beforehand.

I feel San Fran has running back’s stashed away with the label “in case of emergency, break glass.” They seem to always have another rusher who can pick up the slack. Week 10 left Elijah Mitchell with a broken finger. This could open the door for Wilson who had 15% of the offense as the Niners routed the Rams. If Mitchell cannot go in Week 10, start Jeff Wilson with confidence as the 49ers travel cross country to take on the lowly Jaguars. A healthy Mitchell muddies the waters as he will most likely be the starter but could lose valuable goalline work to Wilson. Mitchell can be started as an RB2 if healthy and Wilson would be a touchdown-dependent flex play.

Last week, I advised readers to pick up D’Onta Foreman if they had roster space. If you didn’t then, it was probably too late this week as he was a targeted waiver wire add after he paced the Titans backfield in usage.  Foreman looks to be the back-to-own despite a pedestrian 9.8 fantasy point outing.  Jeremy McNichols looks like he may sit out Week 11 with a concussion opening the door for Foreman to be worked into the passing game more. Foreman’s fantasy day was saved last week by a 39-yard reception, the second-longest play of the game for the Titans. Foreman is an RB2/RB3 play this week. Backfield mate Adrian Peterson is worth an RB3/Flex play with the hope of punching in a score against a weak Houston defense.