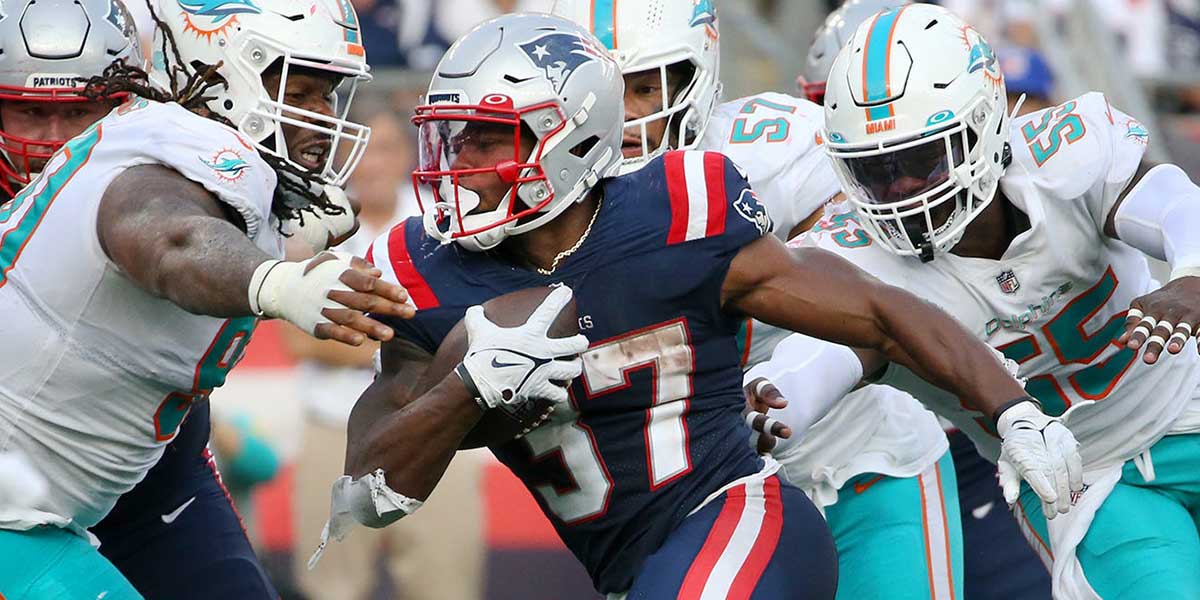 Week 9 welcomed Christian McCaffrey back and proved just how dominant Derrick Henry was. Despite starting his stint on the Injured Reserve, King Henry still sits atop the running backs as the top scorer in point-per-reception leagues. If you’ve been following along earlier in the season, you’ve already secured your shares of the Week 9 lead RB, James Conner. His workhorse performance last week will take him out of this article for the next 4-5 weeks as Chase Edmonds mends a high ankle sprain. Keep reading to find the running-backs-by-committee (RBBC) that need to be considered as we push closer to fantasy football playoffs.

Thirteen of the 15 rushers with more than five games played and over 25% of their team’s offense make up the top-15 PPR scorers at the position. This is why looking at the percentage of offense is important! The other three backs (Dalvin Cook, David Montgomery, and Elijah Mitchell) have either been disappointing on the year or missed significant time due to injury. When a back can consistently demand this level of opportunity the fantasy points will often follow. These RBs should be started with the confidence of a safe floor and the hope of a boom game each week. 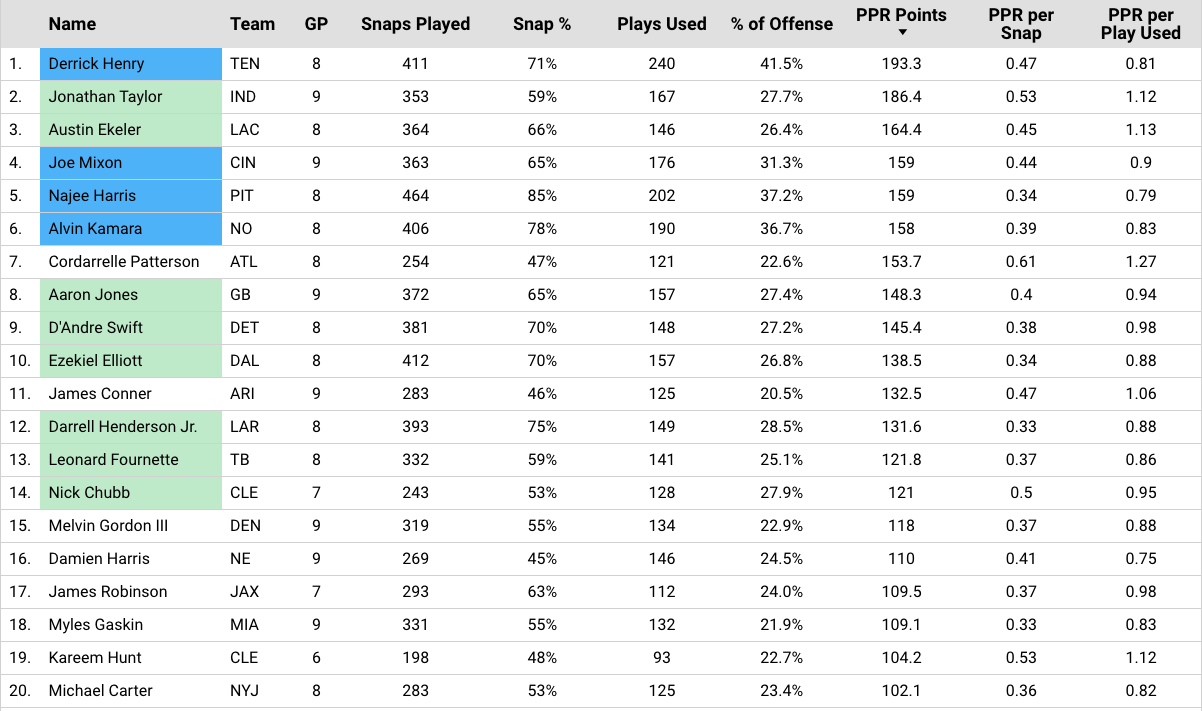 The Derrick Henry-less Titans lead off with a backfield that went from Henry shouldering 42% of the offense to a trifecta of mediocre rushers. Adrian Peterson did punch in a score which helped anyone who started him in Week 9. However, the Titans will square off against a stout New Orleans Saints rush defense in Week 10. Petersons 10 rushes led the team although his 21 yards with a long of 6 was very uninspiring. Jeremy McNichols three of three for 11 yards receiving floated his fantasy day to a meager 6.5 points. He will need more passing work or opportunities to find space in order to be a fantasy starter. The Titans did provide a pleasant surprise with the return of D’Onta Foreman. In case you’ve forgotten Foreman was a fantasy hopeful back as a rookie in 2017 until an Achilles tear shut him down for the next four years! Foreman is worth a flier in deeper leagues or if you have a roster spot to burn. McNichols will be looking to get more involved but will probably follow the game-dependent ebbs and flows that we see from other pass-catching specialists like Nyhiem Hines and J.D. McKissic. Currently, Peterson is a flex play as long as he gets the goal-line work. With more than two days to prepare (Peterson was activated to the active roster on Friday for a Sunday game), there is hope that Peterson returns to his explosive ways of the past.

Oh my, how the bottom dropped out on Kenneth Gainwell! Over the past two weeks, while Miles Sanders recovered on IR, Gainwell has been last in snaps, percent of offense, PPR points, and efficiency per snap and per play used despite leading the team in PPR points through the first seven weeks. Gainwell saw his percent of offense drop to just 4% while Boston Scott remained close to 20% and Jordan Howard jumped to 30%. Gainwell’s 1-yard touchdown was the only bright spot as he scored only 0.2 points throughout the rest of the game against the Chargers. Jordan Howard scampered in for a score as well and led all rushers in the game (including Austin Ekeler) with 71 yards on the ground and the longest rush of the day (18 yards). The Eagles face off against the Broncos next and Howard is startable as a low-end RB2 or flex play. Both Scott and Gainwell are sheer desperation plays and should be left on the bench or better the waiver wire especially with Miles Sanders due to return any week now.

This addition may confuse some readers at first however Alvin Kamara has seen his lowest two percentages of the offense in back-to-back weeks since Mark Ingram has arrived in NOLA. Kamara is still a stud running back even though Ingram has the potential to pick up more steam and eventually more touches and fantasy points. Kamara should be in all starting lineups and Ingram can make his way comfortably into a flex spot. With a lack of options in the Saints offense having a one-two punch of Kamara and Ingram may actually help each rusher’s fantasy outlook.

Just when you thought the running back musical chairs game might end in Bean-Town, both Damien Harris and Rhamondre Stevenson get knocked out of the game with concussions.   This may open the door for another random J.J. Taylor explosion like in Week 2. Or, it could mean that Brandon Bolden’s somewhat consistent usage pays off in the form of an expanded role and fantasy fame. Of course, if Harris or Stevenson clear the concussion protocols ahead of game time, J.J. Taylor could end up being another healthy scratch as he was in Week 9. Harris can be started confidently if active. Stevenson if healthy is an adventurous flex play as is Brandon Bolden if Harris and Stevenson are sidelined. J.J. Taylor should only be started on the most desolate rosters.