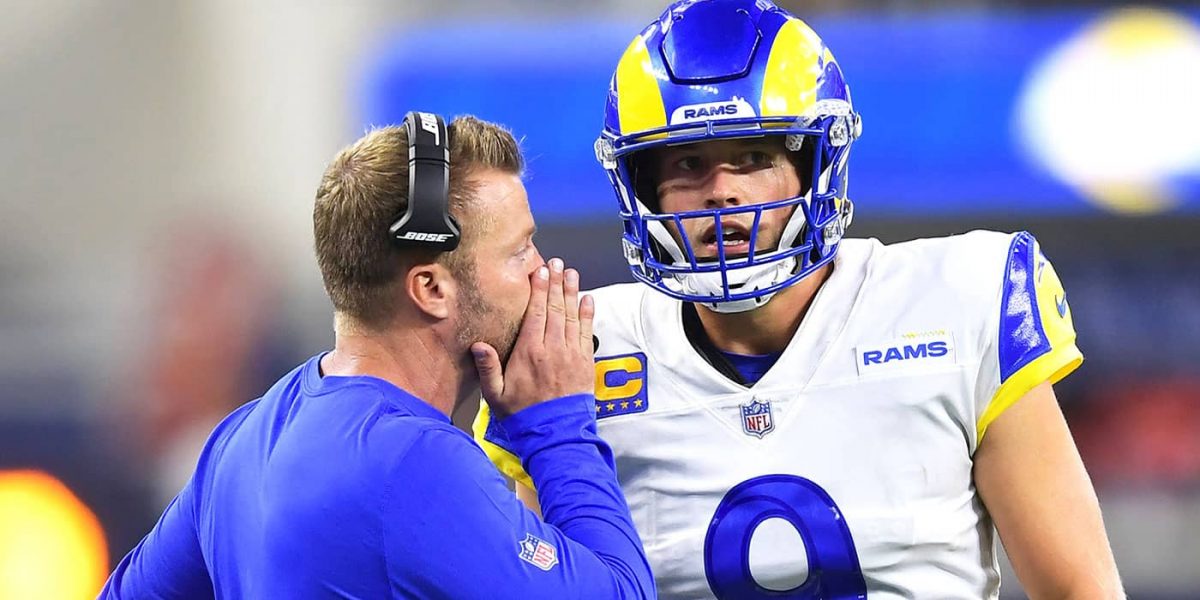 Week 8 is in the books, and seriously is there something we shouldn’t overreact? The Philadelphia Eagles are undefeated, and the Seattle Seahawks, headed by Geno Smith, sit atop the NFC West just as we predicted.

Are we done with the panic about the Tampa Bay Buccaneers and the Green Bay Packers? Can we concede they aren’t very good and move on?

Matt Canada, Josh McDaniels, and Kliff Kingsbury, two are failing with pretty good rosters behind them, the other is failing his roster. All this, and we still have so much more, allows us to react with alarm.

The Super Bowl Hangover Is Not a Myth…Eh, Sean McVay and Zac Taylor

The Bengals are second in the AFC North with a 4-4 record. The Rams are third in NFC West with a 3-4 record.

For the Rams, it isn’t just that they are losing. They are losing badly. And with every loss, our fantasy team is torpedoed. Except for Copper Kupp, the Rams have no viable fantasy player.

Forget about wide receivers not being named Kupp. Quarterback Matthew Stafford is QB24, running back Darrell Henderson is RB43, and Cam Akers isn’t in the top 100. The next best option on the team isn’t Allen Robinson (WR60), but tight end Tyler Higbee who is a respectable (for a tight end) TE20.

Just like we drafted them, right? Kupp is doing what he does; unfortunately, Sean McVay is trying his best to keep him out. Why exactly was he calling that play with the most valuable asset when the game was lost? Seriously Sean.

And just when you thought Joe “Cool” Burrow(QB5) and the Cincinnati Bengals had right the ship, they get shellacked by Nick Chubb and the Cleveland Browns. I know there was no Ja’Marr Chase (WR7). But there was Tee Higgins (WR31), Tyler Boyd (WR20), Joe Mixon (RB21), and Hayden Hurst (TE14).

We can at least be thankful that the hangover experienced by the Bengals is yielding some fantasy value for now. But when even Evan “Money” McPherson (K13) comes up with -2 fantasy points for the week. It just might be time to start overreacting.

Russell Wilson Has Right the Ship and Is Now Fantasy Viable

Easy there, fantasy hopefuls. Yes, the Denver Broncos managed to beat the Jacksonville Jaguars in London. And sure, Wilson’s stat line was: 18-of-30, 252 passing yards, one touchdown, and one interception with four carries for 17 yards. He finished a semi-respectable QB20 for the week with 14.78 fantasy points, but fantasy viable is an overreach.

Wilson’s first five plays included two passes that should have been intercepted. He has a 58.6% completion percentage for the season, and including his one touchdown last week, he has thrown five touchdowns and three interceptions.

That rushing upside that we count on as fantasy managers, well, he hasn’t rushed for more than 30 yards in a game. The most rushing attempts he has is six against the San Francisco 49ers, which amounted to a whopping 17 yards. And he has one total rushing touchdown for the season. He is currently QB19 in fantasy.

It is overreacting to put your fantasy season on Wilson’s shoulders. So, stop.

This statement, unfortunately, is true. Taylor is currently RB32 in standard leagues and RB33 in PPR formats. That is approximately (gets out the calculator) 31 slots behind where you (I) drafted him (give or take).