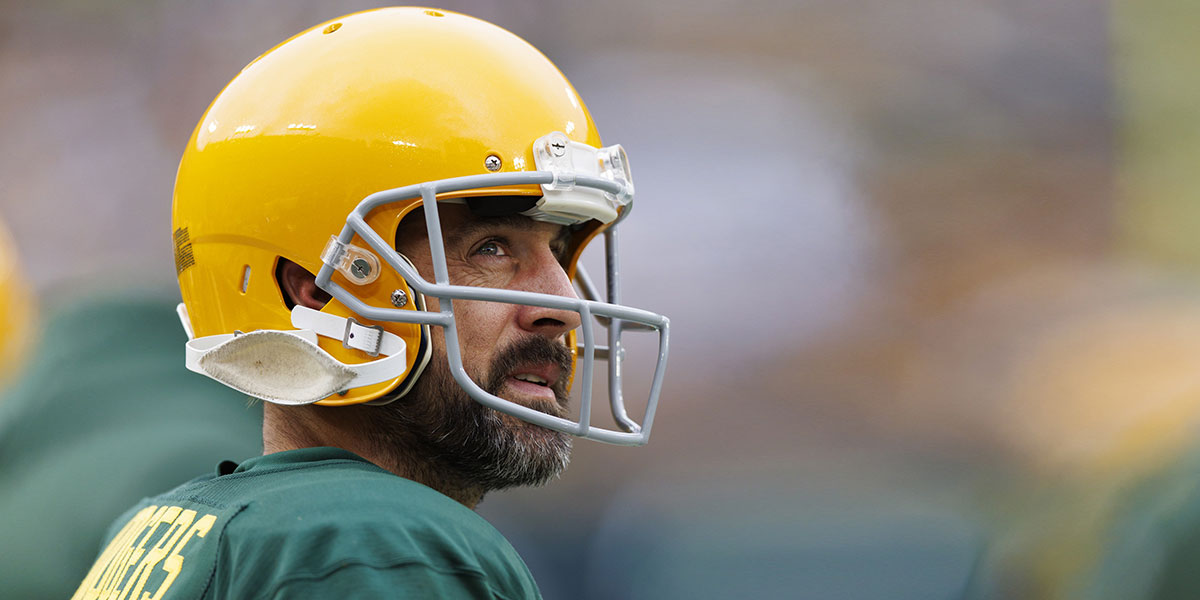 To be honest, just going to pivot this to PANIC or No Panic. When you scale it down, an overreaction is a just cause to push the panic button. And now that we are decisively in the season, it is time to panic.

Did you overreact…er panic when the Jets, Giants, and Steelers all came out winners in Week 6? The NFL Odds had all three teams, large underdogs, this past weekend. Or was it the bet you forgot to put on the under for the Buffalo @ Kansas City or Arizona @ Seattle games?

Whatever caused you to overreact this week, I guarantee you that you were not alone. So much is happening that overreacting right now might just be the norm.

Aside from what they are doing to our fantasy hopes and dreams, these three teams are not playing up to expectations.

The 49ers are decimated with injuries, so perhaps they have an excuse. The Packers are without Davante Adams, and therein lies the rub. And the Buccaneers were counting on a 45-year-old playmaker who believes his time is more important than team time. (You know, attending Robert Kraft’s wedding and such) Except, of course, when it comes to expressing his frustrations on National TV to an offensive line that is (I presume) working as hard as he is or at least being there for their teammates.

Tampa Bay just lost to the Pittsburgh Steelers. If I am being honest as a Pittsburgh fan… I’m happy. Especially considering the Buccaneers went into the game as a double-digit favorite and the Steelers were without four of their starting defensive backs and TJ Watt.

The Buccaneers’ problem is an offensive problem. Sunday against Pittsburgh, they were 1-for-6 on third downs, converted 1-of-4 red zone opportunities, and did not score a touchdown until 4:45 left in the game.

The Buccaneers are tied with the Atlanta Falcons for first place in the NFC South. Let that sink in for a minute. It is still early, and the NFC South isn’t a juggernaut of offensive power, so one imagines that the Buccaneers will eventually find their way to being the undisputed champions of the NFC South. But seriously, it is time to evaluate all aspects of the current product the Buccaneers are putting on the field. And well, it isn’t an overreaction if you are whackaballing that panic button.

Fantasy managers who thought this would be a smash spot for Brady were rewarded with 13.72 fantasy football points. Bailey Zappe had more fantasy points!

I was speaking of hitting that button…hello, Green Bay. No one said it would be easy without Adams, but this is quite unexpected. The Packers are precariously holding on to a 3-3 record after their latest loss to the New York Jets. It wasn’t close. The Jets won 27-10. The Packers scored a field goal in the second quarter and a touchdown in the third. Aaron Rodgers was sacked four times on 45 dropbacks, had two fumbles (one loss), and finished the game with an 88.1 passer rating.

Their running game averaged only 3.2 yards per attempt, while their defense allowed the Jets to rush for 179 yards. The Jets’ rookie running back Breece Hall ran for 116 yards and one touchdown on 20 rushing attempts.

It isn’t all about Adams. This Packers team seems to be a bit underwhelming. They currently sit in second place (3-3) in the NFC North behind the 5-1 Minnesota Vikings.

Sure, you can say “next man up,” but when the only healthy starters on the defensive side of the ball are Fred Warner and Dre Greenlaw, that ain’t nothing. Especially when you consider Week 7 is a matchup with the Kansas City Chiefs.

The 49ers are tied for first, with the Los Angeles Rams and Seattle Seahawks all sitting at 3-3.

There is less reason to push the panic button and overreact in this situation. Williams and Bosa could return Week 7. McGlinchey and Ward are day-to-day, and Hufanga, who returned to the game but showed symptoms of a concussion after the game, is currently in concussion protocol.

While the two-touchdown loss to the Atlanta Falcons was a surprise, was it really with the walking wounded that is the current 49ers squad?

It is unacceptable if they continue to lose. The panic will be loud and rambunctious, and no one cares if it is about your inability to mount an efficient offense or defense or the number of injured players you have.

THERE ARE NO WORDS

The Denver Broncos lost another eye-sore prime-time game. For the love of all that is holy football gods, STOP scheduling the Broncos in prime time. Game swap, show reruns of ‘Rise of the Teenage Mutant Ninja Turtles, literally anything would be better than the mind-numbing assault to the eyes and senses the Denver Broncos have brought to prime time.

It wasn’t just the 9-12 loss to the Indianapolis Colts on Thursday Night. Oh no, we also received the Monday Night 16-19 loss to the Los Angeles Chargers as a parting gift.

It is past time for overreacting. The Broncos extended Russell Wilson’s contract. He has 165$ million in guarantees. He is 25th in QBR (35.8) behind Jacoby Brissett, Cooper Rush, and Geno Smith. He is 21st in EPA (15.6) behind Rush, Brissett, and Smith and 19th in pass attempts (170) behind Brissett and Smith.

This is beyond sad and pathetic, and that is not an overreaction.

And I’m not just saying it because Wilson only ended up 15.8 fantasy points. At least it was better than Thursday night’s 9.2!