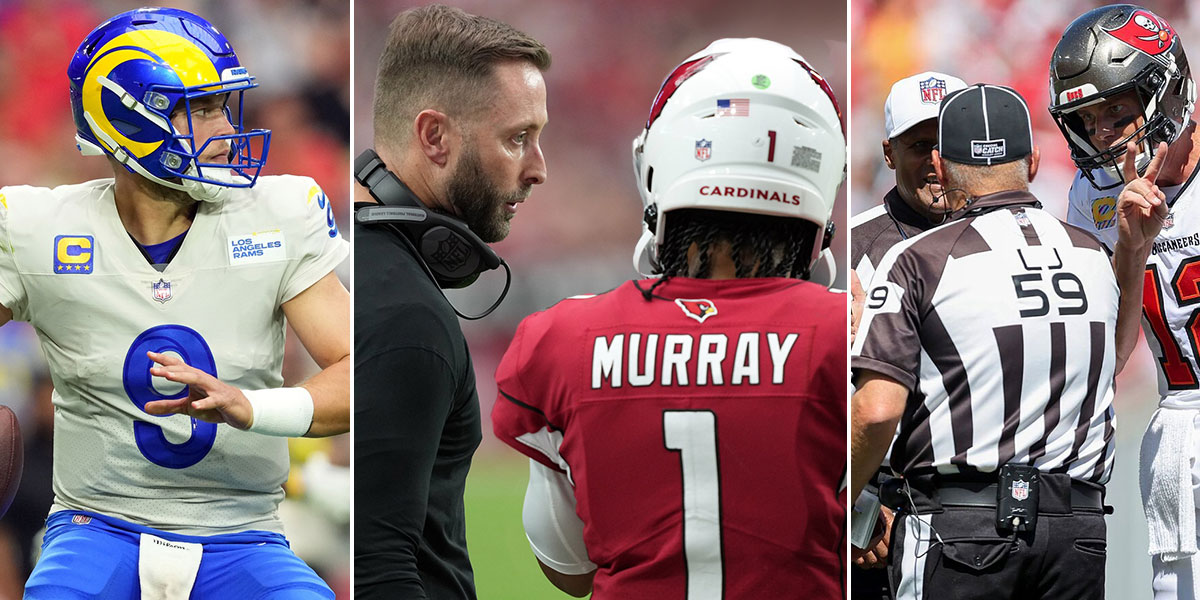 Week 5 of the NFL season is over, and there are plenty of overreactions. Some of the overreactions have to do with the play on the field. But as questionable calls and poor play goes, well, Week 5 gave us enough.

The quarterbacks are mostly the faces of the league. It is completely understandable for the league to want to protect the “marquee” players. But are they accomplishing this goal at the expense of the league’s integrity?

And what about just poor play and poor decision-making? Who is to blame? In Carolina, they decided it was head coach Matt Rhule. What about Arizona, Washington, Pittsburgh, and, yes, Los Angeles? Is it time to start pushing the panic button and overreacting?

Matthew Stafford is Broken, and Even Odell Beckham Cannot Fix Him

The defending Super Bowl champions are broken, well, those on the offense not named Cooper Kupp. Last week the Rams lost to the Dallas Cowboys 10-22. In that loss, Kupp scored the team’s only touchdown. It was the only touchdown the team has scored in the last nine quarters of play.

In the game against Dallas, Stafford was pressured 20 times (most of his career) and sacked five times. For the season, he has been sacked 21 times.

Stafford is not the only thing broken in LA. The offensive line is porous. Wide receivers not named Kupp are a jumble of inefficiency. Allen Robinson hasn’t surpassed 55 passing yards for the season, Ben Skowronek has one with 66 yards and then nothing over 45, and tight end Tyler Higbee has become the de facto WR2, collecting a whopping 25.5% target share while running 128 routes, so far.

ESPN currently gives the Rams an 8% chance to win their division and an 18.6% chance to make the playoffs.

Overreaction? Head coach Sean McVay has expressed confidence in Stafford. He isn’t pushing the panic button and overreaction. That doesn’t mean we can’t.

The Referees Are Overreacting to Quarterback Sacks

What is happening? First, Tom Brady overreacted by the referee, that might have caused the Atlanta Falcons the game. Then Derek Carr gets an overreaction by the referee that took away a turnover by the Kansas City Chiefs.

Bigger men legitimately sacked both quarterbacks. DUH, I think that is football.

Both calls were universally assailed. Unfortunately for the Monday Night Football crew, this game had a wider initially viewership.

Overreaction? Nope. The overreaction of the referees is causing an overreaction from the rest of us. Unless quarterbacks start wearing the red “do not touch” jersey when playing, the referees and NFL need to quash this immediately.

Kliff Kingsbury Needs To Be Fired

Supposedly Kingsbury was hired for his offensive prowess. However, he did enter the NFL with a 35-30 record as the head coach at Texas Tech. And he is 4-8 in his last 12 games, one of which included an epic collapse in the playoff atmosphere.

So far this season, the Cardinals have been outscored 31-0 in the first quarter, averaging 3.65 yards per play.

Per Tru Media, the Cardinals use 11-personnel in shotgun formation 95% of the time, the most in the NFL. They are 31st in the use of motion. And they are 28th in play-action. The run game averages 3.5 yards per rush in the first half, and the team averages 4.77 yards per play (28th). That’s not innovative. It’s pathetic.

The Cardinals will enter Week 6 with a 2-3-0 record. The late-season collapse that has become indicative of the franchise came a little earlier this year.

To sum it up, Jason La Canfora quotes an NFC official, “We were shocked that they extended the coach. He’s not considered a great play-caller. It’s not a sophisticated scheme. Every year the production drops as the season goes on.”

Overreaction? Kingsbury received a contract extension this off-season. So while we may be continuously banging that panic button reacting to the ineptness of the Cardinals offense, we are doing it all alone.

So much happened in Week 5. It’s time to react. When are you pushing that panic button to (over)react?