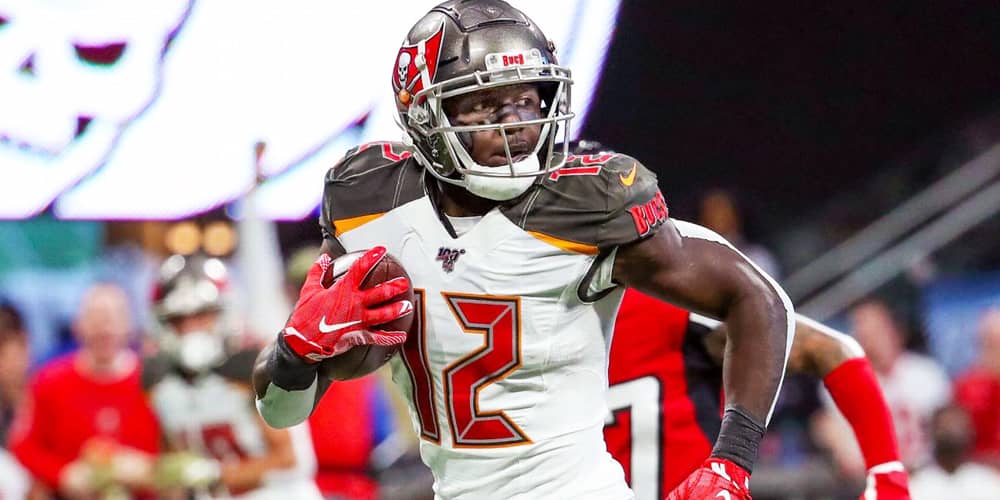 In an effort to aid you in your lineup-setting endeavors, I’ll be providing a weekly glimpse into my rankings; meaning, I’ll be highlighting players I like or dislike more compared to the expert consensus rankings as listed on FantasyPros.com or who I simply like or dislike for that given week. My ranking at the time of the writing will be alongside the player’s name. Needless to say, that ranking will likely change as the week progresses.

Bear in mind that I start this writing earlier in the week, so Expert Consensus Rankings will likely be different by the time of publication. These cannot be held against me – only used for credit.

While I do acknowledge that kickers are people too, neither they nor D/STs will be included. Finally, these cannot be held against me – only used to give credit when credit is due.

As always, feel free to reach me on Twitter for any queries before the slate and I’ll try to get back to you.

Here’s to advancing in the playoffs!

Goff left something to be desired last week, though the Rams didn’t really need him as the defense led the way to an easy victory. The bottom line is I’m high on a lot of Rams this week, including Goff, Cam Akers, Cooper Kupp, Bobby Trees and maybe even Tyler Higbee. A playoff berth and a division title are at stake and the matchup is sublime. It will be a struggle leaving Goff out of my Top 10 quarterbacks.

The risk with starting Tannehill is that any game could be a Derrick Henry game. Although, there have been several instances where Tannehill and Henry have both thrived. This could be one of those instances. They own one of the highest implied team totals on the slate.

Tannehill’s 28 to 5 touchdown to interception ratio is one of the best in the business and his rushing ability makes him even more tantalizing. There is an easy Top 10 upside here.

Oy vey. Now that’s the Jonathan Taylor we’ve been waiting to see for 3 ½ months. Taylor’s usage has been increasing, but he finally gave us the breakout game for which we’ve been chomping at the bit. Annoyingly, Nyheim Hines remains involved and stints Taylor’s ceiling – primarily in the passing game – although Hines has played well and done his part in his complementary role.

Let’s stay positive though, shall we? The first-year stud is now averaging 21.3 touches per game over his last three outings. Frank Reich has finally seen the light. Taylor’s usage isn’t going away, neither are the favorable matchups.

Oof, the involvement of Lamar Jackson and Gus Edwards in the running game is not conducive to Dobbins’ success. It’s not that Dobbins isn’t running well either. The Ravens found the end zone five times on the ground Monday night. While Dobbins tallied one of them, Jackson and Edwards accounted for the other four.

I’m still taking my chances with Dobbins. He’s Baltimore’s most talented running back and faces a Jacksonville squad that was just torched by Derrick Henry. In fact, the Jaguars have allowed 27.5 FPPG over the last three weeks – the fourth-most in the league. And the game script clearly favors the former Buckeye. I view him as a high-end RB2.

It looks like John Brown might return this weekend as he will return to practice this week, according to head coach Sean McDermott. That action would limit Beasley’s upside and lower him in my rankings. Nevertheless, I like Beasley. He’s been one of the most consistent and one of the most underrated wide receivers in the game in 2020. In fact, he’s seen double-digit targets in three of his last four contests.

Again, Brown’s absence has aided in Beasley’s success. His status will need to be monitored. Either way, I am for deploying Beasley as a half-PPR or PPR flex.

Who’s ready for a bounce-back performance? I don’t know about you guys, but I am counting on Godwin in several playoff matchups after his abysmal two-catch, 25-yard excursion. The Buccaneers passing game as a whole was off on Sunday as Tom Brady threw under 200 yards.

If all goes according to plan, this NFC South tilt should be high flying and high scoring. I’m ranking Godwin as a Top 20 wide receiver, although it may not come with a hefty amount of confidence.

Thomas continues to be one of the unsung tight ends of 2020. His involvement in Washington’s offense has been a consistently pleasant surprise. Just last week he played on 91% of the team’s snaps, according to Lineups.com. If Antonio Gibson remains sidelined then Washington will need to count on him even more again.

The game script and matchup are both advantageous as Washington enters this game against the Seahawks as sizable underdogs despite holding a four-game winning streak. I don’t include Thomas among my No. 1 tight ends often, but he’s in there this week.

Would you believe me if I told you that Eric Ebron is the sixth-most targeted tight end in the NFL this year (83)? Because he is. He’s also fifth in receptions (51). His success has been somewhat of a surprise given the presence of JuJu Smith-Schuster, Diontae Johnson and Chase Claypool, although Johnson’s name is becoming synonymous with dropped passes.

Mayfield has been playing hot lately, averaging 311.6 yards while throwing eight touchdowns over his last three contests. The buck stops here. James Bradberry and this secondary have been flying under the radar. Over the last five weeks, the Giants rank third in yards allowed (851) and second in touchdowns allowed (3), per FF Today. On the year, they rank fifth in passes of at least 20 yards allowed. Despite the hot streak, I cannot, in good confidence, start Baker Mayfield.

Tua performed admirably in a relatively close bout with the Chiefs in Week 14. Even so, I’m sticking to the premise that Ryan Fitzpatrick gives them the best chance to win. Tua is the future. However, the Dolphins should be living in the present.

Bill Belichick will be ready for the rook. We saw what the Patriots did to Justin Herbert in Week 13 and they’re THE best fantasy defense against quarterbacks. Starting Tagovailoa this late in the fantasy season is much too risky.

I’ve never seen so many running backs in the proverbial doghouse on one team in one game. Bernard lost a fumble and gave way to Trayveon Williams. Williams lost a fumble a little while later and gave way to Samaje Perine. Williams and Perine pretty much split touches for the remainder of the game while Bernard sat on the bench and disappointed fantasy owners. I’m not playing with fire in the fantasy postseason.

Nothing makes me want to stay in bed more than the thought of plugging Todd Gurley into one of my starting lineups. His play has been in one word, uninspiring. Meanwhile, the Buccaneers boast the least yardage yielded to running backs on the year (58.7 yards per game!!!). You cannot count on Gurley if you want to advance in the fantasy playoffs.

This is how disappointing Jeudy has been in recent weeks: his 42 yards in Week 14 were the most he’s gained in a month. And he’s only been targeted nine times in that span. K.J. Hamler and Tim Patrick have stolen the show of late. If Noah Fant can’t take the field this weekend – he’s currently dealing with an illness – then I like Jeudy a little more. For now, I can’t even start him as a flex – not in the fantasy playoffs.

Let me start by saying that Higgins has played well in the stead of Odell Beckham Jr; I just can’t fully buy into him yet. See the excerpt on the Giants’ pass defense in Baker Mayfield’s entry above. The only Browns wide receiver I’ll consider starting is Jarvis Landry while banking on Cleveland leaning heavily on the dynamic duo of Nick Chubb and Kareem Hunt.

I am over starting Akins. He performed minimally in Week 14 with every recognizable name at wide receiver out for the Texans. Adding insult to injury, he dropped an easy touchdown that was apparently lost in the sunlight. The lack of volume and the Colts defense have me swiping left real fast.

I was beginning to consider Sample as a desperation play in deeper leagues or a cheap DFS play with Brandon Allen and/or Ryan Finley at the helm. It’s just not worth the risk, especially not against this Steelers defense that will be looking to rebound from a losing streak.

Zach hails from the bustling metropolis of Cheyenne, Wyoming. Three things Zach enjoys are football, food and water. Three things Zach doesn’t enjoy are kale, mushrooms and the company of those who enjoy either (except hobbits). Zach is a life-long Broncos fan and has been playing fantasy football longer than he hasn’t. He had top-five finishes in FantasyPros’ 2016 NFL DFAC competition and the 2016 SFB480.