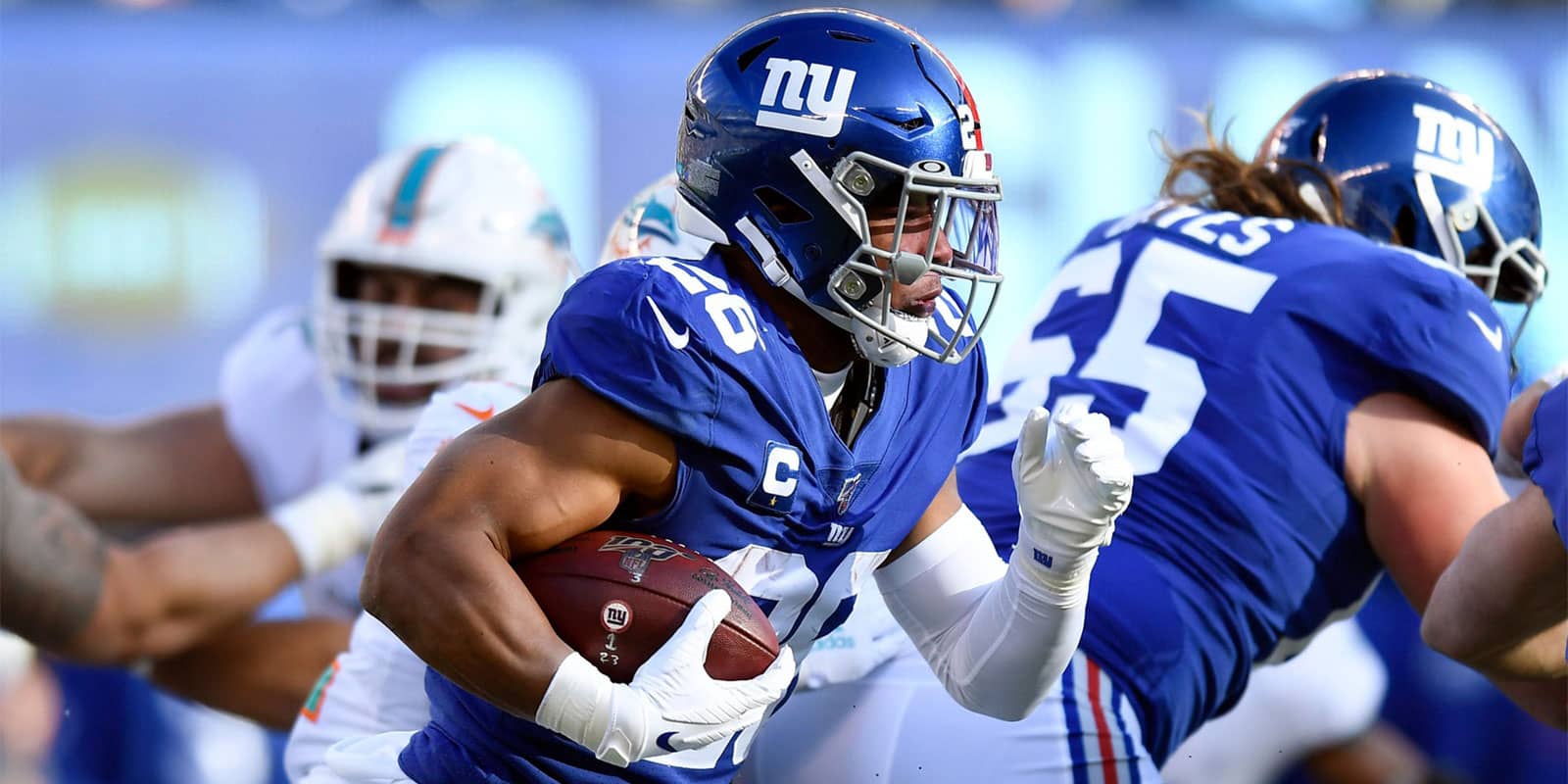 As we finally approach the last 30 days or so before the 2021-2022 NFL season, we are in full swing for fantasy football. With so many drafts underway or soon to be over the next month, it’s time we look at some specific players. These players are the ones to be wary of when looking at where they are being drafted. Let’s take a look at five players who are being over-drafted in fantasy football drafts for the 2021 season.

There is no mistaking Barkley’s natural talent. We saw that through the first two years of his career. With 1,400+ yards from scrimmage and eight or more touchdowns accumulated in each season, it was evident he was one of the best running backs in the game. Going into his third season though, he struggled in his first game under new head coach Joe Judge and offensive coordinator Jason Garrett to the tune of six yards rushing on 15 attempts and 60 yards receiving on six receptions (nine targets). He would proceed to suffer a season-ending knee injury in his second game. Entering this season, we have seen multiple reports of how the Giants will be conservative in their approach to Barkley’s return.

On top of that, the Giants’ offense was exposed as bland and ineffective in 2020 to the tune of 299.5 yards of offense & 17.5 points per game (both 2nd-worst in the league). Barkley was struggling out of the gate in this new offense and it’s a concern for all Giants players in fantasy. Barkley is an enticing player and the game is better when he is healthy and producing. But it’s tough to see him at this point produce anywhere close to what he put up in 2018 & 2019. With other strong options like Austin Ekeler (RB9) and Aaron Jones (RB10) both healthy and in more explosive offenses, they may be better options than Barkley as of right now.

Much like Barkley, Jacobs has shown to be a running back that can carry an offense in the NFL when given the opportunity. Despite missing three games through two seasons, Jacobs has cleared 1,300 yards from scrimmage in both seasons. He saw more carries (273 to 242) and targets (45 to 27) in his sophomore season and even scored 12 rushing touchdowns in 2020 as well. But the Raiders have had a heck of an offseason. They traded away right tackle Trent Brown to the New Patriots, guard Gabe Jackson to the Seattle Seahawks, and center Rodney Hudson to the Arizona Cardinals while also drafting Alex Leatherwood 17th overall to play right tackle.

Las Vegas also then went and signed Kenyan Drake in free agency to a two-year, $11 million dollar contract with $8.5 million guaranteed. While Drake’s role may be unclear, it’s evident that the Raiders think highly of him and will use him regularly in their offense. That’s cut into Jacobs’ workload, which included minimal passing work as it is. Jacobs finished as RB8 in half-PPR scoring last season but between the massive overhaul at offensive line and Drake’s presence, it’s hard to justify Jacobs as a high-end RB2. Especially when more appealing options like Chris Carson (RB17), David Montgomery (RB18), and D’Andre Swift (RB19) are all still on the board as well.

Pitts has an argument for being the most exciting tight-end prospect to enter the league since Vernon Davis in 2006. Outside of Billy Cannon (1st overall, 1960), no tight end has ever been drafted higher than Pitts (4th overall). He also goes to a team that has quarterback Matt Ryan on it, who has been in the top-three amongst all quarterbacks in passing attempts in each of the last three straight seasons. The Falcons also just traded their long-time number one wide receiver Julio Jones and have very little pass-catching depth outside of budding superstar Calvin Ridley. So it would seem like a slam dunk that Pitts would be an impact player in year one. However, there is still plenty going against him as well.

The tight end position is long known as one that usually takes longer than normal to acclimate to from the college game to the NFL. So it’s by no means a given that Pitts will be an exception to this. The Falcons also have another very capable tight end on their roster in Hayden Hurst, who was TE9 last season in half-PPR scoring. Arthur Smith is now the head coach of the team and could very well bring a different philosophy than what we have seen from Atlanta in seasons’ past (i.e., less passing). Pitts is also being picked before much more proven options at the position like Mark Andrews (TE5) and T.J. Hockenson (TE6). The upside is undeniable and a top-three is possible but even then, Pitts is being drafted right around his ceiling. It’s hard to justify this high of an ADP for a player even of Pitts’ talent.

At his peak, “OBJ” was the best wide receiver in the league. In each of his first three seasons in the league, he had 90+ receptions, 1,300+ receiving yards, and 10+ receiving touchdowns. Since then, he has missed 25 games in the last four seasons combined and suffered two season-ending injuries. That includes this past season when he suffered a torn ACL halfway through the year. He was averaging just under 11 fantasy points in half-PPR (10.8, 37th best amongst all WRs) prior to his knee injury. In his first two seasons with the Cleveland Browns (23 games), Beckham has 97 receptions on 176 targets, 1,354 receiving yards, and seven receiving touchdowns. That equals out to 225,9 fantasy points in half-PPR scoring or 9.82 points per game.

To say he has been a disappointment since his trade to Cleveland is an understatement. He is now coming off a serious knee injury, is 28-years old, and is on a team with the fourth-highest run-to-pass ratio (49.7%). This is a run-heavy offense with a quarterback in Baker Mayfield who attempted the 17th most passes of all quarterbacks in the league in 2020. There is nothing to suggest that Beckham should be getting drafted before D.J. Moore (WR25), Tee Higgins (WR28), or Chase Claypool (WR29) at this point. “OBJ” is better off as a mid-tier WR3 for 2021 in fantasy football rather than a low-end WR2.

Outside of his injury-riddled 2019 season, Stafford has been the model of resilience amongst NFL quarterbacks. He played in all 16 games in every other season, including this past season. To call the 2020 Detroit Lions a disappointment may be an understatement. There wasn’t a lot going for Stafford as his team struggled to establish a solid run-game, the Lions defense was one of the worst in the league, and he was without his top wide receiver in Kenny Golladay for most of the year. He was mercifully traded to the Los Angeles Rams over the offseason and now gets a fresh start on a team with two very good wide receivers in Cooper Kupp and Robert Woods. He also gets a strong play-caller at head coach in Sean McVay.

Despite the improvement in talent on his new team, Stafford is suddenly being drafted higher than he should be. He has failed to do any better than QB15 in his last three seasons. This is also a Rams defense with a much better defense than the Lions had fielded in quite some time. So it’s not like Stafford would need to be asked to throw the ball 600+ times like some other quarterbacks this season. He is being drafted ahead of much higher-upside options like Jalen Hurts (QB11), who was QB7 from weeks 14-17 last season when he took over as starting quarterback for the Eagles. Also being drafted after Stafford is Joe Burrow (QB12), who has arguably the best wide receiver trio in the entire league and is on a team with one of the worst defenses. Stafford’s upside is also capped because of his almost non-existent rushing production (one season with 100+ yards in the last four and zero touchdowns in that time).