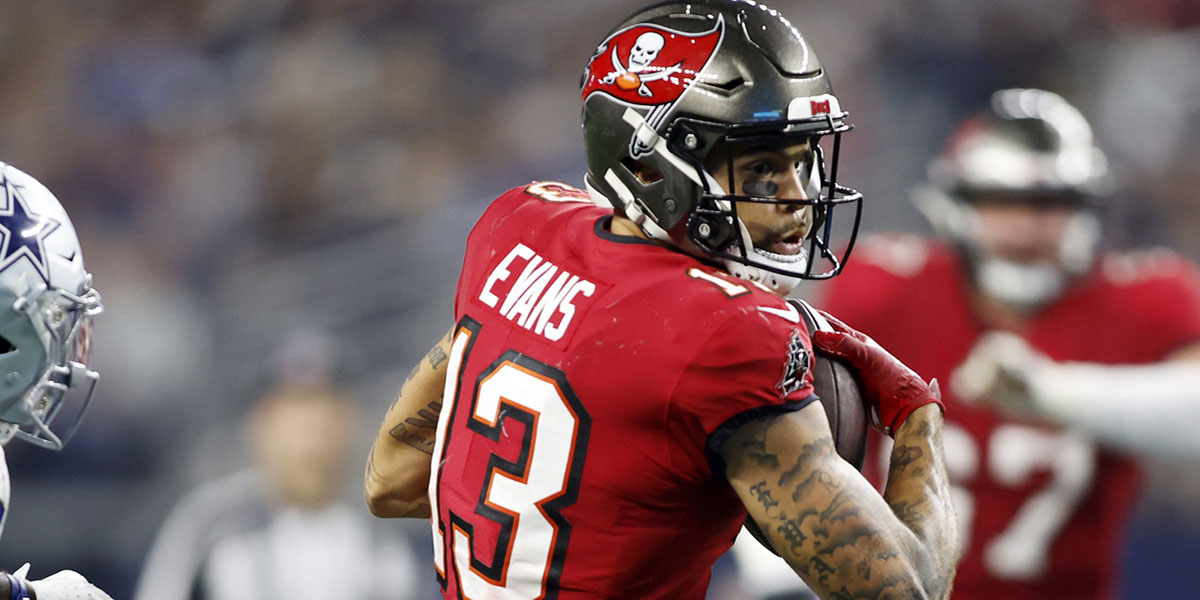 We just passed the halfway point in the NFL regular season, and now’s the time when championships are won or lost. While I understand this is usually the time of year where fantasy managers turn to NFL DFS to keep their Sundays fun and exciting, you still need to give your leagues one last push for making the playoffs.

If you’re going to make a playoff run, now’s the time and today we will analyze a few players you should buy ahead of the back half of the season and a few that you should look to move off of

Evans hasn’t been impressive over his past few games, and a large part of that is due to the offensive woes of the Buccaneers. They haven’t been able to consistently put themselves in scoring position, and that has had an unfortunate effect on all Tampa Bay pass catchers. However, they showed a spark at the end of their win over the Rams that gives me hope they will figure things out. They are bound to improve in the second half of the season, and the veteran wideout is sitting at a relatively affordable price after a couple of underwhelming weeks. Go out and try to acquire Evans in your leagues if possible.

Conner made his return to the field in Week 9 after missing multiple weeks due to a rib injury. He played an alright game in his return, rushing the ball only seven times but averaging over six yards per carry on what he was given. He also caught five passes, which is a very encouraging sign for his fantasy value moving forward. He was a beast in fantasy football last year, and he has a proven track record of production when healthy. Now is the time to buy the veteran running back while his value is still low from his injury.

Olave’s stock soared up with the news that Michael Thomas was placed on season-ending IR last week, but it came tumbling back down to Earth after a subpar outing against the Ravens. There was all sorts of hype throughout the fantasy community about the rookie last week, but now it feels like everyone is writing him off as just another ‘solid’ fantasy option. That just isn’t the case. Olave is a special young talent in the NFL, and he is serving as the undisputed WR1 on the Saints. He will get the volume he needs to be a high producer, and he has the talent to make something happen with it. In addition to all of this, he has a great schedule during the fantasy football playoffs. He has some of the highest league-winning potential I’ve seen this year, and he is being moved at relatively low prices following last week’s underwhelming outing.

Look, I completely understand that he has been dominant lately. He is unstoppable in the run game, and he has even flashed some big plays with his arm. But now the fantasy community has caught on to his recent brilliance, and he is being highly valued for his top-tier production that he likely won’t be able to sustain. He’s still playing on one of the worst offenses in the NFL with a bottom-five receiving core, and his opportunities to score will likely be few and far between. He’ll have to play the against Bills and Eagles defenses in the playoffs, and now is a good time to move off of him while his value is as high as it’s ever been.

Hardman has scored five touchdowns over Kansas City’s last three games, but he only had one on the season prior to that. He’s clearly overproducing with his touchdowns, but that opens a great sell-high window for the speedy receiver. All of the wideouts on the Chiefs have been volatile this year, and it’ll be hard to trust starting him week-to-week moving forward. Fantasy managers should look to capitalize on his recent production and sell him for a more reliable fantasy option.

Time is running out. I know I’ve included him a lot over the past few weeks, but I’m sticking to it. If you have Fournette, you must try to trade him. He is losing this backfield to rookie Rachaad White, and he continues to be less involved by the week. Luckily, he still holds a lot of name value and has had some bailout touchdowns over the past few weeks, so his value is still relatively high. But it won’t stay that way for long. As White continues to take more carries from the veteran, his value will continue to decline for every sub-par week he has. Do everything you can to trade Fournette for the right price before he loses much of his value and workload to the rookie.