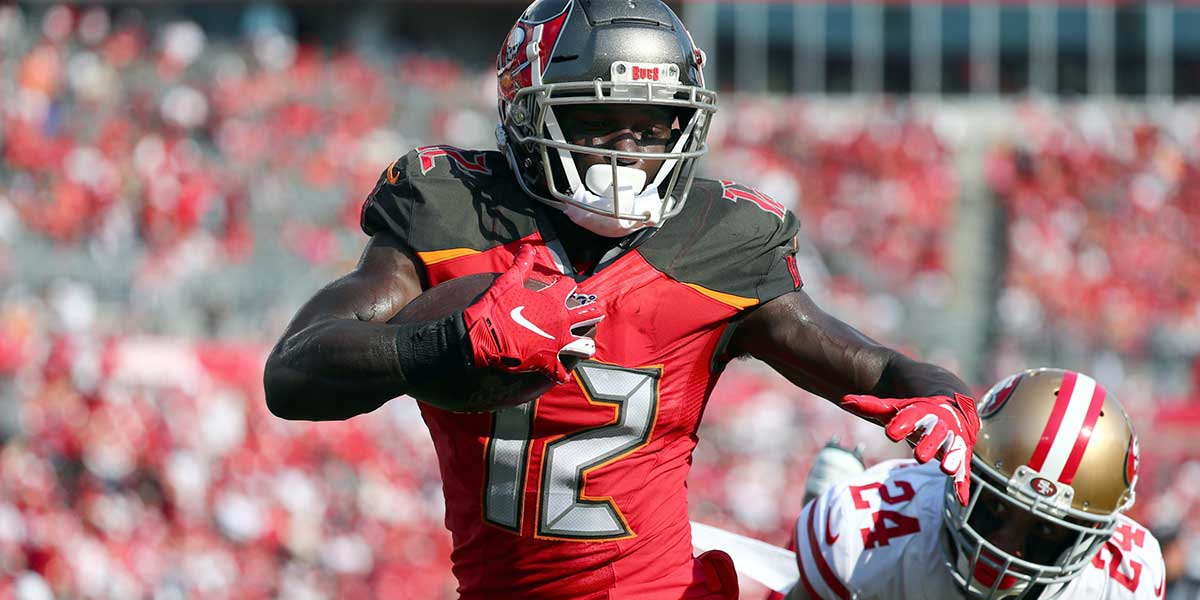 A common saying in the fantasy football community is that you can’t win your league at the draft, but you can certainly lose it, and that has proven to be true year after year. Knowing who to draft is important, but it’s perhaps even more important to know who not to draft. Today, instead of focusing on players with good values, we will be taking a look at seven players that could potentially bust at their ADP and lose you your league.

Chris Godwin has been a very consistent and reliable fantasy option over the past few seasons, but the difference this season is the torn ACL he sustained towards the end of last season. He is actually ahead of schedule in his recovery, having already returned to practice and getting reps with the first-team offense. While all that news seems promising for the veteran wideout, there are concerns with him being rushed back and added competition in the offense. The team added Julio Jones and Russell Gage to their already-loaded wide receiver group this season, and if he rushes back and is playing before he is 100%, he may not get as much volume to start the season as fantasy managers are hoping for.

Godwin is currently being drafted in the fourth round of PPR drafts, and he’s going ahead of many receivers that are much more locked-and-loaded than he is, such as Courtland Sutton, Marquise Brown, Darnell Mooney, and Michael Thomas. Godwin could end up being a good fantasy option again this season, but his risk and draft price make him a player to avoid in 2022.

This take might not be a very popular one out there, as Henry has been one of the best fantasy running backs over the past few seasons, but he is a big bust candidate for the 2022 season. Henry’s fantasy value has thrived on the back of the volume he gets in the Titans’ offense, but it appears all that work he’s received over the course of his career is finally catching up to him.

Last year, we saw both his yards per carry and his yards per touch drop off pretty significantly, and while he was still an elite fantasy contributor during the games he played, that could be a sign of decline for Henry. He has had a lot of wear-and-tear on his body, getting over 900 touches over the past three seasons, and that type of mileage has historically led to decline and injury. The veteran back has been the exception to the rule for many years, but as he ages and continues to put on mileage, it’s bound to catch up to him soon. He is going as a top-five pick in most fantasy drafts, and that price is far too steep for somebody with the bust potential that Henry has.

It’s not usually a good idea to bet against great quarterbacks like Patrick Mahomes, but for fantasy purposes this year, I’m out on drafting him. It has nothing to do with his talent or even his supporting cast, but it has to do with where he is being drafted. He is currently going in the third round of most fantasy drafts, and he usually comes off of the board before players like Michael Pittman Jr., Breece Hall, and David Montgomery.

It wouldn’t be surprising to see Mahomes have a better overall season than all of these players, but quarterbacks don’t hold the same value that a running back or receiver does because there isn’t as much scarcity at the QB position. Fantasy managers would be much better off waiting to get a later quarterback that still has high potential at a lower price, such as a Jalen Hurts or Russell Wilson. He may once again be a very effective player for fantasy, but it seems very unlikely that he has an elite enough season to make him worth such a steep price.

This one is rather tricky, given the value of having an elite tight end, but George Kittle is not set up for consistent fantasy production in 2022. He is currently being drafted as the TE4 in the early third round in most drafts, and while he seems likely to finish top-5 at the position, he won’t see enough consistent volume to make him worth a third-round pick or even a reliable weekly starter.

This year, he has to catch passes from Trey Lance, who is young, unproven, and mobile, all of which are bad for pass catchers. In addition to that, he has to compete with Deebo Samuel and Brandon Aiyuk for targets on an offense that is already a run-first scheme, so he’s not set up to be a workhorse for the team. He’s currently going above players like Travis Etienne, D.K. Metcalf, and Elijah Mitchell, and I just don’t see Kittle producing well enough to make him a more valuable pick than many of these players.

Treylon Burks has received a great deal of hype this offseason, having been drafted in the first round to replace A.J. Brown, who was traded to the Eagles. This hype has led to him being drafted in the eighth or ninth round of most fantasy drafts, and in my opinion, that’s way too high. I understand the appeal; he’s in an offense that needs someone to step up at receiver and he’s got the draft capital you want, but he has had a very poor preseason so far. He has been dealing with conditioning issues that stem from his asthma, and he failed to even record one catch during the team’s first preseason game.

His main competition for targets is Robert Woods, who the team pursued this off-season and is ahead of schedule with his torn ACL recovery. If Woods is healthy and sharp towards the beginning of the season, he almost certainly will be the go-to guy for Ryan Tannehill this year. Burks is currently going ahead of players like Chris Olave, George Pickens, Skyy Moore, and DeVante Parker, and I can’t justify taking a rookie who isn’t even the first option on his run-heavy offense ahead of these people who are or have the opportunity to be the top options in their more pass-friendly schemes.

Deebo Samuel has grown very popular in the fantasy community because of the unique impact he had both in real life and in fantasy, but I think it may have given some fantasy managers tunnel vision as to other factors that impact his outlook for this year. For instance, he has a new quarterback and possibly more competition for targets. Trey Lance taking over the starting QB spot will likely lead to less overall passing volume for the offense, and if George Kittle and Brandon Aiyuk are both healthy and involved for the entire year, that could mean reduced volume for Samuel. On top of all of this, he is being drafted in the second round of fantasy drafts, ahead of other elite players like CeeDee Lamb, Aaron Jones, Saquon Barkley, and others. Pair an extensive injury history with these other factors, and you’ve got yourself plenty of reasons to avoid Samuel in 2022.

I understand the argument for Jacobs; he’s finished as an RB1 in both of the last two seasons and he’s the bell-cow back for a much-improved offense, and while that’s a compelling point, his lack of upside makes me fade him in drafts. He puts up good numbers when it comes to rushing attempts, but he is seldom used in the passing game and that caps his potential upside for this year. He also is now in an offense that features Davante Adams, Darren Waller, and Hunter Renfrow as pass catchers, so the team will likely rely less on his production on the ground and will feature a more air-raid type of offense.

Jacobs is being drafted in the fourth round of most drafts, and while he is a safe pick, it’s not worth taking him above players like Mike Williams, Elijah Mitchell, or Courtland Sutton, who all have potential to be league winners in 2022. Fantasy football is all about winning, and drafting Josh Jacobs will limit the upside and chance at championship contention for your entire team this season.