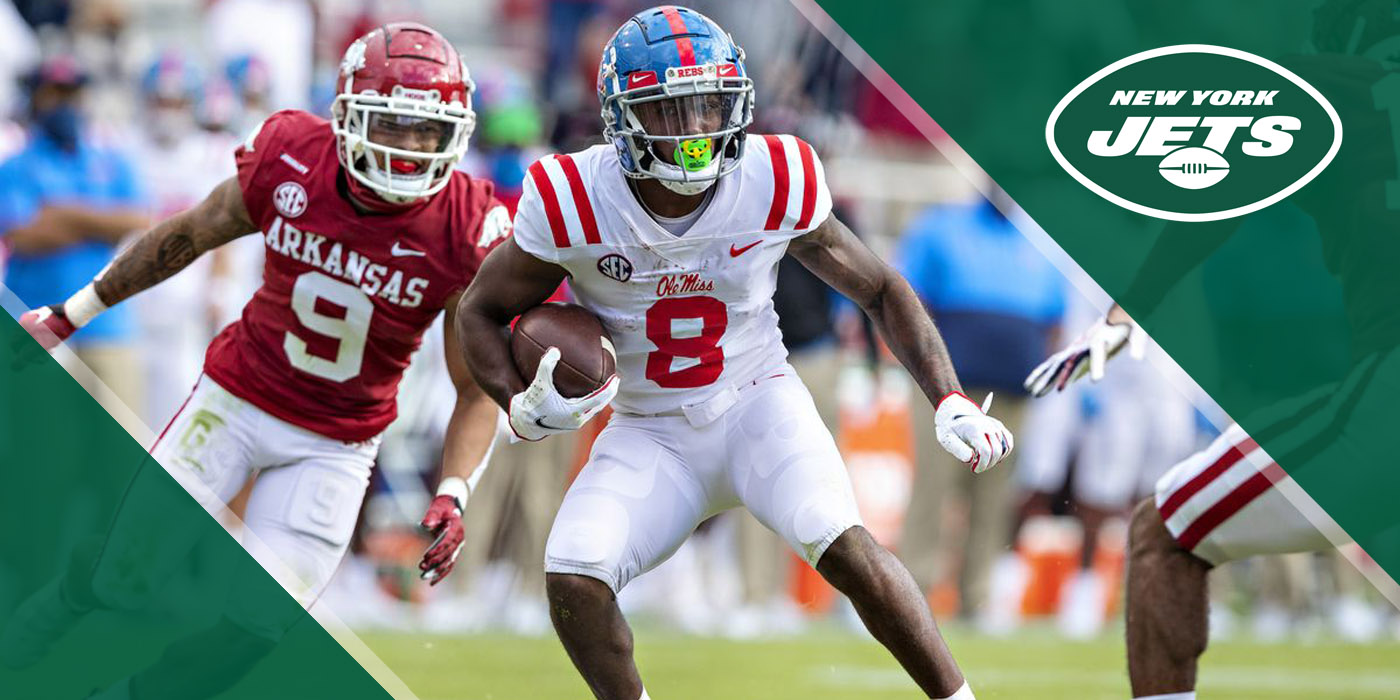 With the 34th pick in the NFL draft, the New York Jets selected Elijah Moore and paired him with their rookie quarterback Zach Wilson. The Jets set out to revamp their team and they did it in a big way through the draft. Moore broke the Ole Miss record for receptions with 86 in 2020 on his way to All-American honors, All-SEC honors, and Biletnikoff Award finalist honors. Ole Miss has become a sort of wide receiver factory as of late boasting three wide receivers being drafted in round two in the last three years. As we all know, DK Metcalf and AJ Brown are certified studs, so will Moore be able to have the same success at the NFL level?

Moore is an absolute freak of an athlete. He is lightning fast, posting a 4.35 40-time at his pro day this year which firmly places him in the 92nd percentile among wide receivers. Not only is he fast, but he is agile as well posting an agility score of 10.67 which is good enough for the 98th percentile, again, for wide receivers. Like I said in the pre-draft article, Moore always finds a way of getting open. There are many times that you will see him begin a route, watch the defender identify the route, and then he will snap it off to find the soft spot in coverage to make sure he gives a nice, open target to his quarterback. Even though he finds the soft spot in the zone, his route running is still unpolished and raw for what you like to see out of an NFL receiver. Not to mention the fact that he hardly had to make contested catches at the college level due to his ability to always be open. This is worrisome for me in regards to his success at the next level.

Like I said before, the Jets are on a warpath with new head coach Robert Saleh making sure they can turn this franchise around as quickly as possible. We all knew the Jets were taking a quarterback at #2, but they also drafted an offensive lineman in the first round and then turned around and gave Wilson a shiny new threat with Moore being taken at the top part of the 2nd round. In regards to the depth chart, we all want to see Moore bypassing the likes of Denzel Mims and Jamison Crowder, but the fact of the matter is, Moore is just more of a slot guy than the outside, elite threat the Jets may have been looking for. Mims stands at 6’ 3” and Crowder at 5’ 9”, so maybe we will see a rotation of slot receivers between Moore and Crowder. The fact of the matter remains, Moore isn’t the big-bodied receiver that will win those outside jump balls easily and this concerns me in regard to his fantasy relevance in 2021.

Don’t expect WR1 numbers from anyone on the Jets roster for 2021, including Moore. Yes, we all love looking at the new players and rookies that are coming in and thinking about how amazing they can be, but we need to temper our overall expectations. The Jets are throwing out a rookie quarterback and although Wilson draws comparisons to Patrick Mahomes, the fact of the matter remains that most rookie QBs don’t produce at a high level early in their career. So, ipso facto, if Wilson isn’t producing at a high level then Moore producing at a high level isn’t very likely. I don’t really see a clear path to WR2 numbers either and really view Moore as a WR3/Flex play depending on the matchup. His upside is limited especially with all of the other mouths to feed in New York. Moore has intriguing dynasty value, but we might need to see how Wilson performs before we go off the deep end and declare him an asset we need to target.

Speaking of dynasty leagues, all of my truthers for this man out there might be a little upset, but I don’t even think Moore is the most important dynasty asset we should be acquiring from this team. I mean, think about it. We are installing a new offense for this team this coming year and while that means that all players have to adjust, Moore has to not only learn a new playbook but also adjust to the speed of the NFL game. These DBs that he will be facing are some of the best athletes in the world and leaps and bounds above the competition he faced in college. Mims has already had a year to prepare for that and is, obviously, more attuned with the speed of the NFL game. I foresee Mims and Wilson forging a nice duo, with Moore coming in to clean up some of the mess that may be left behind when Mims and Wilson can’t get it to work in certain games. This is not me saying that you should avoid Moore at all costs, but for right now, with all of his hype, I would wait on buying him to see if he is truly legit before burning all of my assets.

This article was written in two parts, the following is Elijah Moore Pre-NFL Draft Profile

Everyone is always looking for the next great superstar and Elijah Moore has drawn comparisons to Tyreek Hill. Truthfully, we may never find the next Tyreek Hill, but Elijah Moore can be considered to be cut from a similar cloth. Moore combines incredible speed and agility to be a legit big-play threat from anywhere on the field. His route running is decent at best, but he does excel at finding the soft spot in the coverage and is seemingly always open. There isn’t much evidence to show that he is a great contested catch guy as there weren’t many times he had to fight defenders for the ball (he was usually blistering past them). He’s not the greatest blocker, but this is due in part to the fact that he’s a dynamic playmaker with the ball in his hands and wasn’t called on the block all that often at Ole Miss.

It seems that every NFL offense now is craving the wide receiver that can blow by any defender and create a mismatch with his speed. If this speaks to you and your fantasy team, you’re reading about the right guy. Moore had a 4.35 40-yard dash time at his pro day. He’s top 5 at the position in regards to speed and you can directly see it translate over to his play on the field. So many times we see players run quick 40 times, but they play slower than that. Moore is not one of these cases. He combines agile quickness with raw speed to blow past a defender and make big plays look incredibly too easy.

While Moore has good speed and agility, his route running is not as refined as you’d like to see. This is mainly in part to Moore being fast enough to not need to have as good of route running to be open, but it is still a concern. However, he does have an uncanny ability to find the soft spot in the zone and get open that way. When you take a look at his film, you can see that there are routes that he doesn’t “complete” due to the defender being right with him. He’s able to snap it off and create an open target for his quarterback. This isn’t ideal for most NFL teams, but we see a lot of “new age” receivers coming in doing things similar to this, so it will benefit Moore’s game.

NFL teams also like seeing players who are willing to block and create those lanes at the second level for big plays to pop off. Moore is all of 178 pounds and is built very well. He shows the ability that he can block if needed, but it is obviously not where NFL teams want it to be. This isn’t necessarily due to his ability or willingness as a run blocker, but the fact that he was never really called on having to do this at the college level. Most of the time, Moore was being put into motion to create space or running a route to get him the ball as he was the most dynamic playmaker Ole Miss had. Simply put, Moore was “the guy” and didn’t have to block because the ball was usually in his hands.

Truthfully, the part of Moore’s game that I am the most worried about is his ability to make contested catches. When you look at his tape, you very clearly see Moore open on nearly every play. Like I said, this allows for him to make huge plays like it’s nothing. The issue is we don’t see how good he is when a defender is trying to make a play on the ball. Is he able to outmuscle a defender? Is he able to high point the ball at the right time to make sure he gets better positioning? These questions can’t be answered until we see concrete evidence and unfortunately, we just don’t see much of that from his game.