Recently Gregg Rosenthal, from NFL.com did a power rankings list of every general manager in the NFL. Eagles GM, Howie Roseman was ranked 21st. That may seem very low, but if you talk with any Eagles fan these days, they’ll say Roseman should be lower.

The main reason for a lot of the hatred towards the Eagles General Manager is his inability to draft talent. He has continuously whiffed on players and fans are eating their hearts out on what could have been. What’s even more frustrating, is that Roseman doesn’t listen to his scouts. Just last year Roseman ignored team scouts while on the clock twice. Jeff McLane of The Philadelphia Inquirer reported that Roseman overruled the scouting department with their first two picks of the 2020 NFL Draft. Roseman sided with the coaching staff that TCU wide receiver Jalen Reagor would be a better fit in the offense than former LSU standout Justin Jefferson. The jury is still out on Reagor, but Jefferson was no secret. Everyone knew he had a ton of potential and yet Roseman had to overcomplicate the situation.

The Eagles have multiple picks in the NFL Draft this year, and fans are holding their breath hoping Roseman doesn’t get cute again. If your thinking about doing something for the three-day NFL Draft event, check out Predict the Pick game at NFL.com. There are also tons of prop bets for the NFL Draft this year, if you’re thinking about signing up for a sportsbook make sure you do your research, read this review about what sportsbooks are available in your area and which website offers the

Could Hurts Save Roseman’s Job?

There is no pick that has caused more stress and drama for the franchise in recent years than Jalen Hurts. The Eagles selected him in the 2nd round of the 2020 NFL draft when the scouts were recommending the team draft safety, Jeremy Chinn. The damage that it caused with quarterback Carson Wentz, and the coaching staff spiraled out of control in 2020. The end result was Wentz was traded and the coaching staff was fired. Yet somehow Howie Roseman remained. He made the pick that destroyed everything around him yet it didn’t result in Roseman getting fired.

Mind you, we’re only halfway through the story. Getting out of the Carson Wentz contract by trading him to the Indianapolis Colts might have been a good thing. Firing Doug Pederson that seemed to get less and less creative with his offense with every passing year may also be a good thing. Drafting Jalen Hurts, who has flashed potential could also be a good thing, and Roseman is banking on his success. 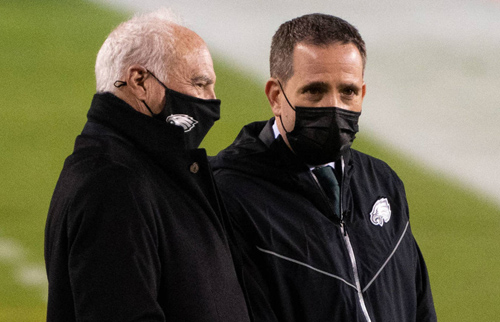 Eagles fans are notoriously tough on their team, but if Roseman plays his cards right, he could turn things around quickly. After trading back with the Miami Dolphins, and the deal to unload Wentz, the Eagles are looking at three first-round picks next year. The Eagles will also be out the dead money they buried themselves in from signing Wentz next year. Meaning, the Eagles could have multiple high picks and cap space in 2022. They’ll also have a full year to decide on whether or not the team should make Hurts their guy, or trade-up for a blue-chip franchise quarterback.

While Eagles fans would love to see Roseman get canned, it looks like he’ll have at least this season to try and right the ship. Hopefully, the writing is on the wall for Roseman and he focuses on making the most of the picks in this draft.