As it pertains to this column, the Daily Fantasy picks that were made in week 6 turned out to be a bit of a mixed bag. A few players did shine bright and two of those players came from the quarterback position. Both Kirk Cousins and DeShaun Watson would finish the week in the top five of scoring. The third player worth noting would be Larry Fitzgerald of the Cardinals. Perhaps sharing a huddle with Adrian Peterson inspired the future hall of fame receiver as he would finish as one of the top scoring wide receivers. Kareem Hunt would perform below expectations and Terrelle Pryor was far from a lock of the week but never the less, Gridiron Experts is back at it again. So get ready to soak up some fantasy football knowledge as we prepare you for week 7.

**Please Subscribe to our newsletter to stay up to date on all our latest fantasy football articles and NFL Picks. Also, follow @GridironExperts and me (@TheFFRealist) on Twitter. 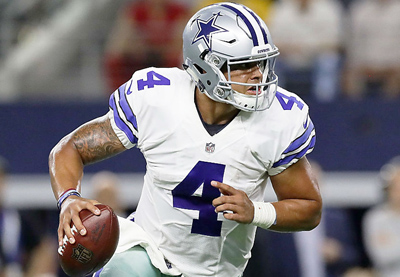 Dak Prescott ($7,300): As the world turns, so does the Ezekiel Elliot soap opera. As of this writing, Elliot is going to play but regardless, this is a good start for Dak Prescott as the Cowboys play the 49ers. Despite playing games close this year, the winless 49ers are allowing the fourth most points to the position. That should be music to the ears of Prescott as his last two games were productive ones. During that time he would throw for six touchdowns and just two interceptions. On top of playing well in the passing game, you can expect the second year signal caller to get himself a rushing score as well. There aren’t a ton of quarterbacks with an ideal matchup this week so don’t sweat betting large on the position.

Kirk Cousins ($6,500): Last week turned out to be a good week to pick Kirk Cousins. It is always smart to ride the hot hand so I will continue to do that in week 7. The Redskins quarterback is leaving the first two weeks of 2017 in the rearview as he has averaged just over 300 yards passing over his last three games. Cousins will look to let the good times roll under the bright lights of Monday night against the Philadelphia Eagles. Despite only allowing nine touchdown passes, the Eagles are still allowing the seventh most points to the quarterback position. This is due in large part to them allowing 1,734 passing yards so far. Those passing yards stands as the third highest mark and should be something that Cousins can take advantage of. You can expect this game to have plenty of scoring with Cousins finishing up with right around 275 yards and at least two passing scores. Don’t be scared to buy into the opposing Carson Wentz who is priced at $6,700.

Adrian Peterson ($5,800): Lock of the week: In redraft leagues, those who had been hanging on to Adrian Peterson throughout the early part of 2017 were having their patience tested. That patience was rewarded last week with his debut with the Cardinals. You may not have owned Peterson through thick and thin this year but that doesn’t mean you can’t get a piece of the pie in daily fantasy. This week the Cardinals will be going up against the Los Angeles Rams. This is a Rams squad that has had trouble with running backs all year long. After six weeks, the Rams are allowing the most points to the position and stand as the only team to allow more than five rushing scores. Those stats along with the Rams allowing more than 4.5 yards per carry should have Peterson salivating. The future hall of fame back doesn’t have an ideal schedule the rest of the way, but in week 7, the sky is the limit.

Jerick McKinnon ($6,300): After cutting ties with our previous pick, bringing in a free agent, and drafting another running back, this isn’t exactly where the Minnesota Vikings thought that they would find themselves. Regardless, 16 rushing attempts along with six targets in each of the last two weeks has McKinnon looking like the man in Minnesota. Last week, McKinnon would finish sixth in scoring at his position as he would score on the ground and through the air. On deck for McKinnon and the Vikings is the Baltimore Ravens who are currently allowing the seventh most points to running backs. While a majority of those points the Ravens have allowed have come in the form of rushing yards, I still like the Vikings back to have some production in the passing game. This could wind up being the first game of 2017 in which the Ravens allow a receiving touchdown to a running back.

Julio Jones ($8,500): This is the highest priced player that I will be suggesting that you use in week 7. Julio Jones’ production and lack of use has become obvious in Atlanta. The Falcons pro bowl receiver has yet to score a touchdown and has only had two games with more than five receptions. With the exception of his rookie season, this is the longest Jones has gone into a season without scoring a touchdown. His head coach Dan Quinn has even voiced his concern. While meeting with the media on Monday, Quinn stated that he is unhappy with Jones’ target volume thus far. Look for Ryan and Jones to get back on track this week and there may be no better opponent to do so against. The Falcons will be headed to Foxboro for a Super Bowl rematch against the Patriots. This is a Patriots defense that is allowing the fourth most points in DK formats to wide receivers. Some folks groan at this potential factor but, this will be a bit of revenge game for the Falcons. His coach wants to see him targeted more and his opponent is favorable. Spending the $8,500 is a worthwhile investment in week 7.

Nelson Agholor ($4,900): In the midst of the Philadelphia Eagles hot start has been the resurrection of Nelson Agholor. The third-year wide receiver has four touchdowns thus far which is already more than he had in his first two seasons combined. He is only 17 receptions and 45 yards away from his career highs. Regardless of the how and why Wentz will continue to look for Agholor. This production will bleed into week 7. As previously mentioned, I’m expecting the Eagles and Redskins game to be a high scoring affair. This is a gut feeling pick as the Redskins are allowing the second fewest points to the position. That being said, I still like Agholor to make some big plays.

Jimmy Graham ($4,900): The Seattle Seahawks are coming out of their bye week and will play a road game against the Giants. The Giants are a team that has been victimized in 2017 by the tight end. They are tied for allowing the most touchdowns to the position with six and are allowing the fourth most yards. While Jimmy Graham failed to score a touchdown till week 5, he has had three games with eight or more targets. Those targets have elevated Graham to being the second most targeted pass catcher in the Seahawks offense. The opportunity is there and the production will follow at MetLife stadium this weekend. This was a close second to my lock of the week pick.

Jaguars ($3,700): The Jacksonville Jaguars have been a pleasant defensive surprise this season. Up next for the Jaguars is the Indianapolis Colts. Jacoby Brissett has been serviceable from a fantasy standpoint but he could find himself in some trouble this weekend. In this early season, the Jaguars have 23 sacks, 10 interceptions, and four defensive touchdowns. TY Hilton will still have his fair share of yards but this is as good a game as any to own the Jaguars defense.

Please signup for our Newsletter below!

Mike is a hardcore fantasy football fan. He has been doing serious writing for a couple of years now and loves finding the next big sleeper that no one is talking about. He also isn’t afraid to go against the grain and predict the next big bust. The fantasy community is as strong as ever and Mike is ready to help you win a title!