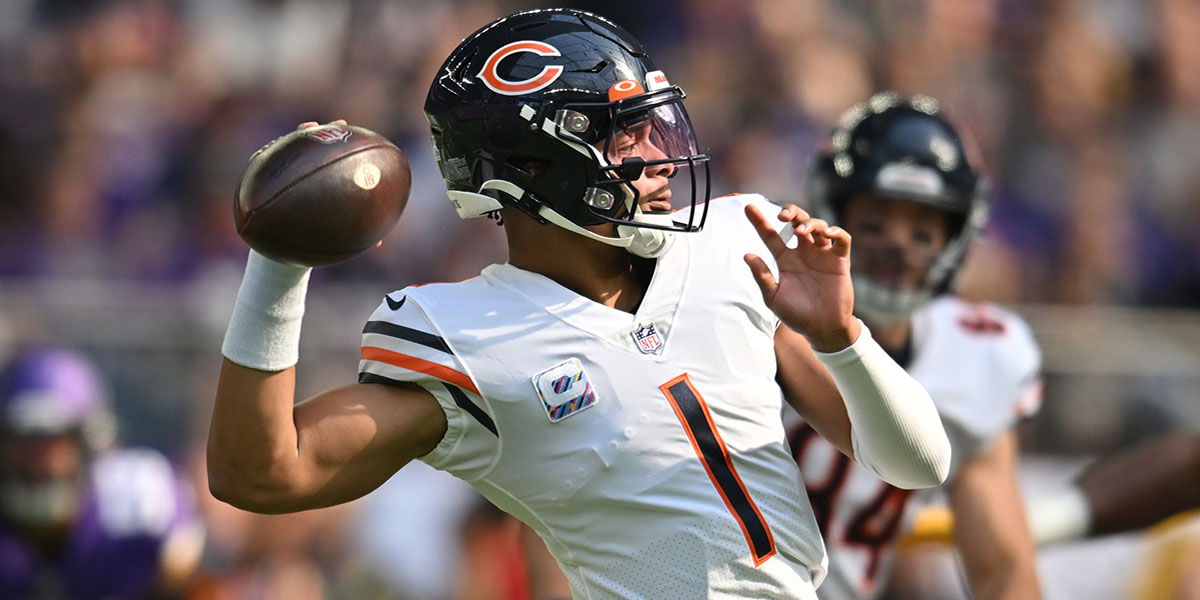 Welcome to the eighth installment of a weekly series where I provide you with what I think is the optimal cash game lineup. All prices, fantasy points, and analyses are based on DraftKings’ DFS platform. If you are unfamiliar with what cash games are, or if you are interested in my basic strategy, click here.

Week 8 was meh. My lineup scored 171.74, a great outcome. The problem was that this was a high-scoring week, so 171.74 points only netted me a 42.8% outcome in head-to-heads. I feel great about the Ehlinger play, even if he only scored 8.54 points. The Kupp call was right, though it was the wrong high-priced receiver (see Tyreek Hill). Foreman and Pollard were both essential plays that hit, while Mostert (the worst value of the trio) gave me a snowflake. Even with the use of hindsight, I’m happy with my lineup construction.

There are a lot of ways I could go here with so many great cheap QBs on the main slate, but I’ll go with Justin Fields ($5,300). After a sluggish start, Fields ranks as the QB5 in DK PPG over the last 4 weeks. The four names above him? Josh Allen, Jalen Hurts, Patrick Mahomes, and Joe Burrow, all of whom are much more expensive. Fields should see a relatively easy matchup at home, facing a Dolphins defense that ranks 23rd in EPA/play allowed and 26th in yards/play allowed.

With Mike Williams and Keenan Allen appearing to be long shots to play on Sunday, I want to attack this offense. My first inclination was to play Josh Palmer or DeAndre Carter at their discounted salaries, but I think the sharp move is to play Austin Ekeler ($8,800). Ekeler is the RB1 in PPG by a wide margin, and might even see his role increase with the Chargers’ two-star WRs likely inactive. Ekeler provides an insane floor with his receiving role and is a smash cash play if you draft a cheap QB like Fields.

Arguably the most obvious cash play this week is Joe Mixon ($6,500). Mixon is in a similar situation as Ekeler because his star WR teammate Ja’Marr Chase is out for the next month or so with a hip injury. Mixon got plenty of work in his first game sans Chase on Monday Night, earning a massive 80% rush share and 25.7% target share. Expect this insane usage to continue while Chase is out. Mixon might end up as both the best cash and tournament play this week, so I’m elated to play him at just $6,500.

This week was by far the hardest for identifying WRs to play in cash. There’s only one WR I think is a spectacular value (I’ll get to him in the next paragraph), so the other two I played after I had finished the rest of my roster constitution and figured out what made the most sense. The first of these is Amon-Ra St. Brown ($6,600). He let me down in a big way two weeks ago, but that was a result of a random concussion injury that didn’t even end up being a concussion. He showed us once again who he truly is, a volume monster, this past week as he was targeted 10 times on 37 team pass attempts, resulting in a 27.0% target share. Brown is a textbook cash play, a cheap receiver with a load of guaranteed volume.

The only glaringly obvious cash play this week is DJ Moore ($5,800). I’m treating him like Kenneth Walker a few weeks ago, where I just kept playing him until his price finally caught up to where it should be. Based on recent performance, I think Moore should be closer to $6,500 or even $7,000, much higher than his current salary. Moore is currently the focal point of this Panther offense and I see no reason why that shouldn’t continue.

The other player I liked earlier in the week and finally was able to fit in is Rondale Moore ($5,200). A lot of fantasy managers backed off of him after a disastrous Week 7 that saw his score just 4.1 points. I kept the faith, however, playing him in a few GPPs and season-long teams, and reaped the rewards of his 23.4 point performance last week. The Cardinals seem committed to giving him a role in this offense, so his guaranteed volume week in and week out makes me feel comfortable playing him in cash this week.

I went back and forth all week on who I’d play at TE, but I finally got off of James Mithcell and am playing Cade Otton ($3,100). This decision came clear when on Friday the Buccaneers announced that Cameron Brate would be out on Sunday. This leaves Otton as the clear starter at TE, and if he continues to see 5 or 6 targets, he’ll be the great punt TE play I need to make this lineup work.

There are so many great RBs this week, so it was hard to narrow it down to only three, but I’m going with Travis Etienne ($6,300) as my last one. Even though the Jaguars are in a rut right now, this hasn’t been affecting Etienne’s fantasy outcomes. In the two weeks since James Robinson was traded, Etienne has scored 22.9 and 28.4 points, respectively, marking his two highest single-game scores this year. The sky is the limit for the former Clemson Tiger and I’d not be surprised if his salary got into the high $7,000’s this season, so I’m content to play him at $6,300.

There isn’t a great punt DST, but I hate paying up for a “good” one, so I’m playing the Commanders ($2,400) because their salary makes my lineup work. I’m honestly not expecting more than a few points, but if you go up even $500, I don’t see any DST that looks any better. This might end up being a week where paying up at DST is optimal, but it’s rarely something I’ll do in cash, especially if it doesn’t fit with my lineup construction.

I feel the best I ever have when it comes to my thought process, but there’s too much uncertainty this week and not enough easy values. Still, I’m happy with the end result. Playing Fields and Otton allows me to get up to Ekeler, and then I can target a couple RBs and WRs that are values. 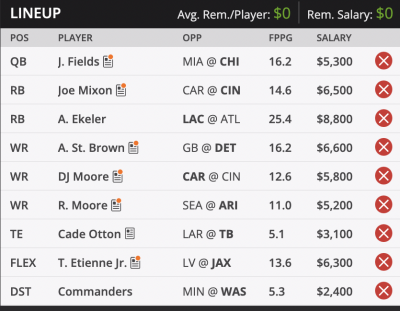