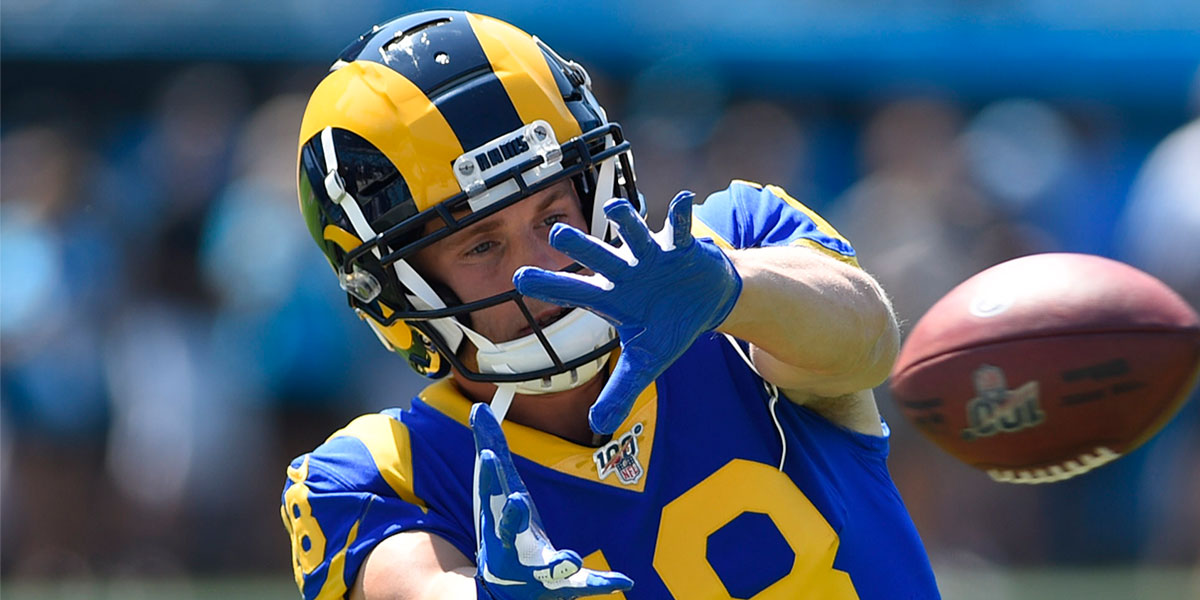 Welcome to the eighth installment of a weekly series where I provide you with what I think is the optimal cash game lineup. All prices, fantasy points, and analyses are based on DraftKings’ DFS platform. If you are unfamiliar with what cash games are, or if you are interested in my basic strategy, click here.

Week 8 was frustrating on a multitude of fronts. First, Amon-Ra St. Brown was taken out of the game on his first touch of the day with a possible concussion. This left me with just 1.4 total points from him at $7,100. If this wasn’t bad enough, snowflakes from Lamar, Cooks, and Lamb put this lineup away. I feel lucky to still escape with winning 28.6% of head-to-heads. There was plenty of good in the lineup, such as all three RBs crushing and choosing the correct punt TE, but a near zero from a player due to injury is almost impossible to overcome.

Let’s put that all behind us and move on to Week 8.

This week, we are provided with the rare opportunity of playing a stone min QB. It was announced Tuesday that Sam Ehlinger ($4,000) will be the Colts starting QB moving forward. I’m not expecting the world out of the second-year QB in his first start, but anything more than 10-12 points would be a great value. There’s some risk in playing him, but it opens the door to spending up on other positions.

For the last two or three years, fantasy analysts have been begging the Cowboys to give Tony Pollard ($6,100) more touches with the thought that he’s better than Zeke (I agree), but the Cowboys have not done so. This week, they’ll be forced to give him the bulk of the touches as Ezekiel Elliott is doubtful to play. In the one game Zeke has missed where Pollard was active over the last two years, Pollard scored 31.2 DK points. Even if Zeke manages to avoid the scratch, he’ll likely play in an extremely limited fashion. Don’t overthink this. Pollard is a cash game lock.

Over the last few weeks, it’s become pretty apparent that Raheem Mostert ($5,900) is the Dolphins’ RB1. He impressed last week, scoring 20.5 DK points. Additionally, the Dolphins play the Lions, owners of the worst defense in the NFL. If he truly has distanced himself from Edmonds, $5,900 for the RB1 on a good offense is a great value play.

Cooper Kupp ($9,600) still feels slightly underpriced. His volume has been absurd since 2021 and it doesn’t appear to be going anywhere. Paying down at QB with Ehlinger allows me to afford the most expensive (and valuable) player on the slate. I don’t love their matchup against the 49ers’ defense, but Kupp seems to still get his in any game script. Kupp is the quintessential cash play and he makes too much sense to pair with a $4,000 QB.

I couldn’t believe my eyes when I saw Chris Olave’s ($6,000) salary. Olave is coming off of a 14-target, 20.6 DK point game that only saw his salary increase by $300 week-over-week. Also, WR Jarvis Landry and WR Michael Thomas are out this Sunday, leaving Olave as the only viable target in this game. Fans will realize sooner or later just how talented Olave is, but until then, I will take the value I’m getting with him and play him in cash.

Just when we thought he was buried, DJ Moore ($5,300) showed again that he is an alpha, scoring 19.6 DK points in the first McCaffrey-less game for the Panthers. It appears as though now that CMC is gone, the Panthers have decided to turn their attention to the (now) best player on their offense. Moore is far too cheap, so I’m playing him in cash, even though I’m already playing Foreman.

There are a few intriguing cheaper TE options, but I have plenty of salary left over so I’m playing Zach Ertz ($5,100). Ertz has been the definition of reliable volume, averaging 7.9 targets per game and hitting at least 10 targets in 4/7 games this season. The Cardinals are likely to be in a negative game script this week, so Ertz could see a lot of garbage time targets and pay off his $5,100 price tag.

I had no intention of playing D’Onta Foreman ($5,300) again this week, but it was reported today that teammate Chubba Hubbard is out this Sunday against the Atlanta Falcons. Foreman flashed what he could do when given the opportunity last week, scoring 19.5 DK points on just 17 touches. It’s not crazy to think he’s an even larger value this week, given that his salary is still quite low and he should dominate the RB snap share. The Panthers don’t have the greatest offense, but there’s too much-guaranteed opportunity there not to play Foreman in cash.

Even though I’m playing Ehlinger, I understand that the Colts themselves will likely not play well. This is why I’m playing the Commanders DST ($2,600) They fit the punt mold I like at DST and could perform well against Ehlinger and this struggling Colts team in his first start.

It wasn’t easy to settle on a cash build this week due to a plethora of good value, but I am satisfied with how my cash lineup looks. Ehlinger allows us to pay up for Kupp, and then I’m targeting a slew of underpriced or value-play RBs and WRs. This team has plenty of projectable volume, something that is a must in cash. 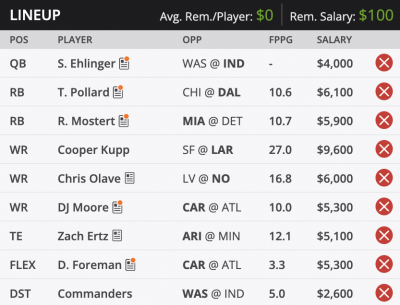