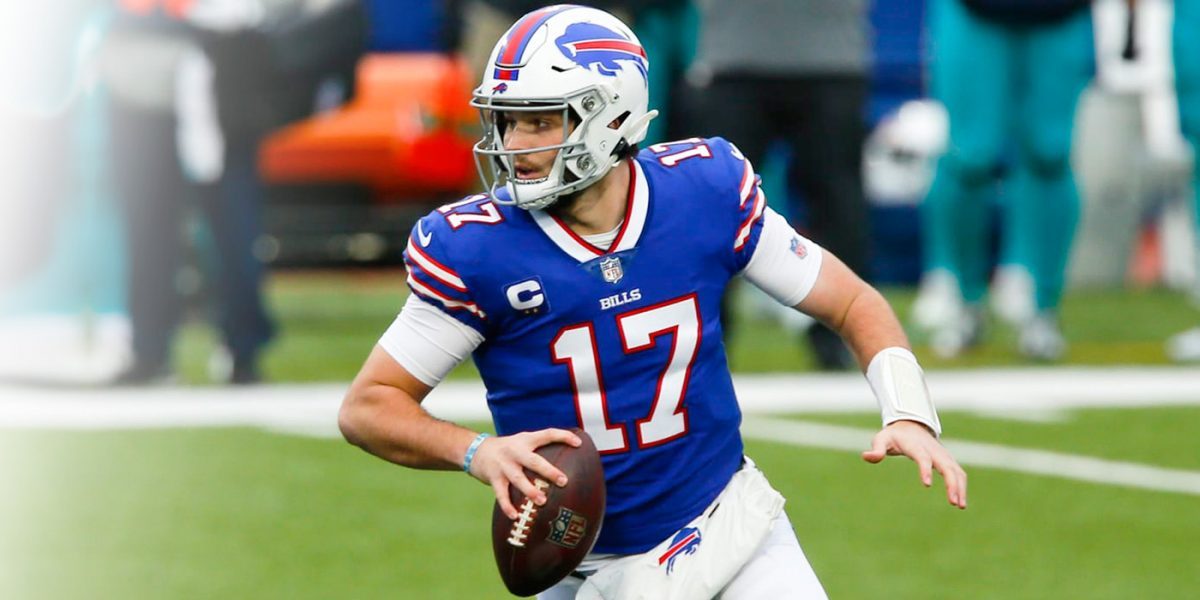 Welcome to the sixth installment of a weekly series where I provide you with what I think is the optimal cash game lineup. All prices, fantasy points, and analyses are based on DraftKings’ DFS platform. If you are unfamiliar with what cash games are, or if you are interested in my basic strategy, click here.

My cash lineup in Week 5 was… confusing. It ended up scoring 171.24 points, but I didn’t win any of my head-to-heads. To put this into perspective, using data from DraftKings’ NFL $20k Singleback Tournament I found that the average score was 135.3. That means my cash lineup was 36 points better than the “average” lineup, leading me to believe that I got really unlucky with my head-to-head matchups this week. The lineup was sound structurally and performed well, but sometimes variance hits hard and it doesn’t care about your feelings.

It’s time to move on to this week.

Even though this is just a cash lineup, I feel I need to get a piece of this massive Bills-Chiefs showdown, so I’m playing Josh Allen this week. He takes up a good chunk of your salary at his $8,200, but I think it’s still an easy play. Allen is the #1 scorer in all of fantasy, averaging a whopping 32.3 points per game. I think his median outcome is still probably closer to that 24-27 point range, which is still a fine outcome at $8,200.

There are three obvious cash locks at RB this week, which can be proved by looking at ownership, and I’m playing all of them.

The first is Seahawks RB Kenneth Walker. The rookie should see all the opportunity in the world now that teammate Rashaad Penny is out for the season with a leg injury. Walker looked excellent in college, amassing 2,930 scrimmage yards and 36 total touchdowns in this three years of college ball. A talented player in a wide-open RB room in a great offense at $5,400? This might be the easiest cash play of the week.

It’s been a while since there was a value play RB under $5,000, so I’m overjoyed to slot Cardinals RB Eno Benjamin into my cash lineup. Benjamin was the next man up after James Conner and Darrel Williams left the game with injuries. He took this opportunity and ran with it, posting 3 catches, 53 total yards, and a touchdown en route to a 14.3 DK point game. With Conner and Williams both out this weekend, Benjamin should have the backfield to himself and smash his price tag of $4,600.

I am breaking my rule of always playing Cooper Kupp when he’s below $10,000 because there is too much value on the board at WR, like Alec Pierce. Pierce might be the WR1 in Indianapolis, as he has seen more targets in the last two games than teammate Michael Pittman Jr. Indianapolis is going to continue to play from behind as they face the Jaguars this week, so I expect Pierce to see plenty of targets and return value on his $4,300 salary.

One of the things I was curious about coming into Kenny Pickett’s first start was who his top WR would be. It was still Diontae Johnson, but George Pickens has seen 8 targets in both games Pickett has played in. His salary is still down at $4,600 which is too low considering his volume and talent, so this is another cheap value play that will help me pay up at QB and TE.

I hit big time on Tyler Lockett last week as he finally found the endzone twice, and went off for 30 DK points. Inexplicably, however, DraftKings didn’t move his salary at all. Therefore, I’m playing him again. I don’t expect him to go off quite like that but this Seahawks offense is too prolific to let a talented WR with decent volume only cost $5,600. He’s still a value, so I’m playing him again.

I’m finally employing the “great” part of my “great or late” TE strategy, playing Mark Andrews at $7,000. Outside of Kelce, there’s no other TE as predictable and productive as Andrews. With no real punt TE this week and a plethora of WR punts, Andrews is a great fit in this lineup.

Perhaps the strangest price on all of DraftKings this week is Saquon Barkley at $7,700. Barkley is currently the RB3 on DK through 5 weeks, scoring at least 11.6 points in every game and averaging 22.3. Saquon is priced far too low and he should be in every cash lineup constructed this week.

You know the drill. Play the cheapest defense that makes some sense, since there’s no correlation between ownership and points scored. This week, my poison of choice is the New York Jets DST. They’re underdogs against the Packers, but GB doesn’t tend to score that many points, so there’s a reality where the Jets lose and still put up 6-8 points.

This lineup is a lot different from last week’s, but that’s because we need to reevaluate each and every slate. With all the great value out there at WR, I have the ability to pay up for Josh Allen, Saquon Barkley, and Mark Andrews. These guys will provide my lineup with high floors while I hope that the punt WRs play up to the task. Also, I love the pricing on Walker. He’s my favorite part of the lineup. 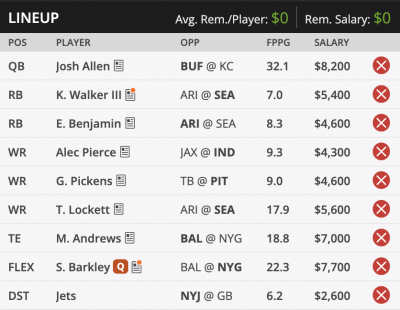