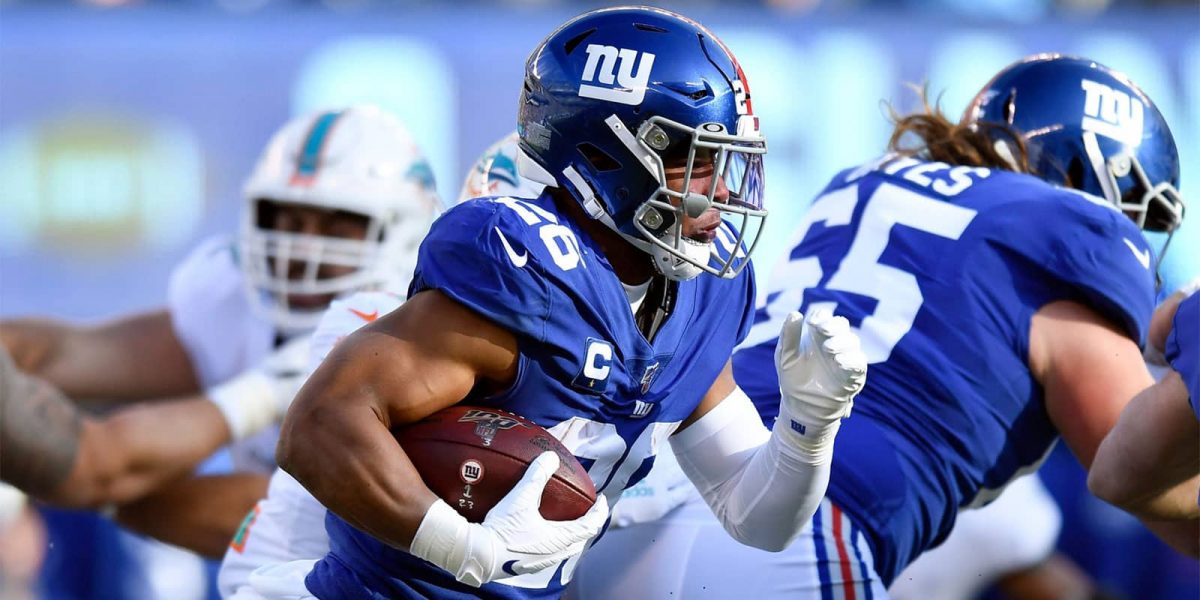 Welcome to the second installment of a weekly series where I provide you with what I think is the optimal cash game lineup. All prices, fantasy points, and analyses are based on DraftKings’ DFS platform. If you are unfamiliar with what cash games are, or if you are interested in my basic strategy, click here.

Last week, my cash lineup scored 157.66 DraftKings points, which was good enough to place in the top 50% of the large majority of 50/50 cash games and also a good chunk of double-ups as well. I was overall pleased with the lineup, but there are definitely some mistakes I made that we can learn from in order to make this week’s cash lineup even better.

I cheaped out at QB last week and paid for it. Lance was a disappointment, scoring just under 11 points. I think a large chunk of this can be explained by the weather, and I should’ve pivoted off him as soon as I could.

With this being said, and combined with some value plays I’ll get to later, I’m paying up this week for Lamar Jackson. Jackson has one of the safest floors in fantasy because of his rushing ability, and if he gets the passing game going too, he can break slates. With great fantasy QBs like Josh Allen and Jalen Hurts off the main slate, Jackson is the optimal play in cash this week.

I am once again paying up for an elite RB, but I’m doing so for a different stud RB, namely Saquon Barkley. McCaffrey disappointed last week by only scoring 15.7 points, while Saquon finished with more points than any other RB in Week 1. Somehow, Barkley is priced as the RB5 on the main slate at just $7,300. I’m not expecting him to score 35+ points again, but he seems like a lock for 20+ as the Giants have no other skill positions on offense to write home about.

I enjoyed the Chase Edmonds discount all off-season, but I didn’t expect that discount to continue into the regular season. Yet, here we are. Edmonds only scored 10.5 points in week 1, but there is optimism in his outlook this week. He wasn’t very efficient last week, but he handled 12 out of the Dolphins’ 23 carries, and he received a 13.8% target share. At a salary of $5,200, Edmonds is a safe play who should give us 12-15 points, which would make him a value at his current cost.

I’m elated to play Ja’Marr Chase in this lineup. Somehow, Chase is priced at $8,000 after a week in which he went off for 28.9 points. I prefer to have an “anchor WR” in cash lineups, and Chase can do just that, and more.

After waffling on him in cash last week, I’m playing Brandin Cooks this week. Cooks showed fantasy managers exactly why he’s a great play in cash against the Colts last Sunday by posting 7 catches for 82 yards and a ridiculous 34.3% target share. If he catches a TD this week and keeps his target share, he’s going to be a fantastic play in any fantasy format. He makes even more sense in this format, especially at $6,000.

The last WR I’m slotting into this lineup is Jerry Jeudy. I’ll admit that he overperformed last week, scoring 20.2 points on only 7 targets, but I think he’s a great play at $5,600. I think both he and teammate Courtland Sutton will see increased targets this week, as Russell Wilson probably won’t target Javonte Williams 12 times and something called Andrew Beck 3 times in a game going forward.

I firmly believe that Juwan Johnson is the key to the slate this week. Johnson was targeted 5 times last week, good enough for a 15.6% target share, placing him in the top 10 for tight ends. He also had a whopping 33% red zone target share but didn’t catch a touchdown. If he can sustain these numbers, he is going to be the biggest value on this entire slate at the stone-cold minimum of $2,500.

I’m not sure how many “must-plays” there are on this slate, but if there are, Darrell Henderson Jr. has got to be one of them. Henderson dominated the usage category in Week 1, earning an 80.6% snap share and an 85.7% snap share, both of which place him #2 among all RBs. Henderson is the clear RB1 on a team that projects to score a lot of points, both in Week 2 and beyond. Henderson is a steal at $5,700 and is an easy cash play.

I hit the nuts last week by picking the Vikings, one of the cheaper DSTs on the slate, who scored 12 points. This week, there’s another cheap DST that is an obvious play, though I don’t think I’m alone. The Bengals DST is the third cheapest DST on this slate and they get to play the Cowboys sans Dak Prescott. I don’t think Cincinnati is loaded on defense by any means, but they have probably one of the most favorable outlooks going against a Cooper Rush-led Dallas team.

After a mildly successful Week 1, I’m feeling ecstatic about the cash lineup this week. Punting on TE by taking the ultra-cheap (and productive) Juwan Johnson allows us to play Chase, Barkley, and Jackson, all of whom offer safe floors and huge ceilings. 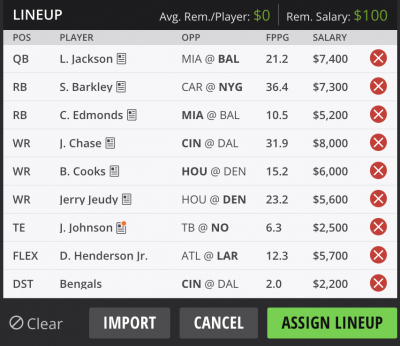