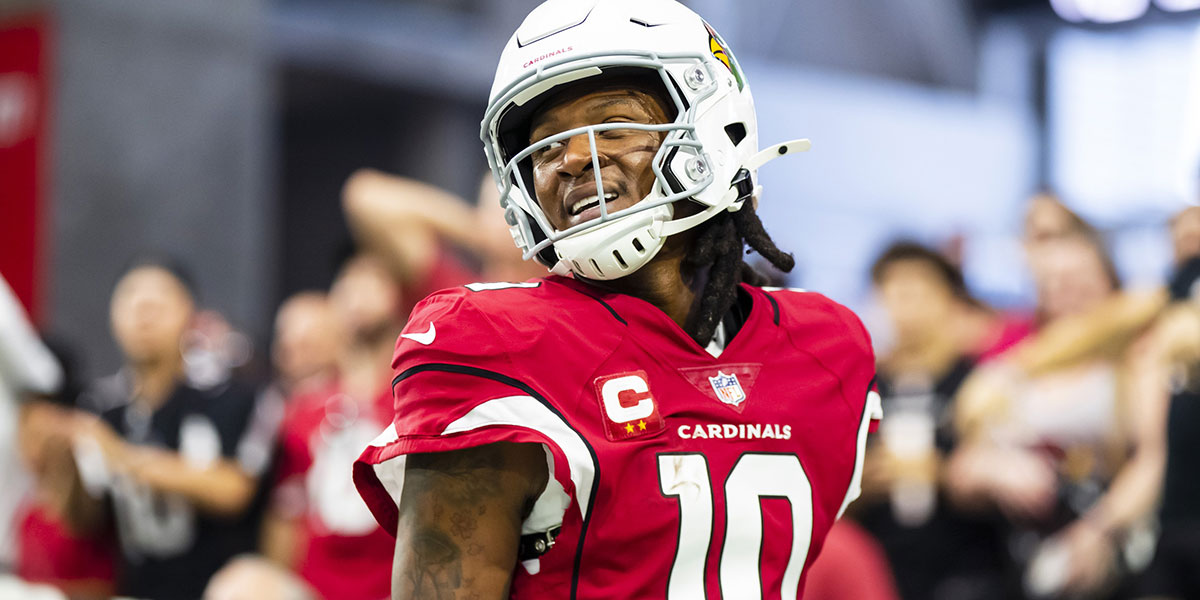 Welcome to the tenth installment of a weekly series where I provide you with what I think is the optimal cash game lineup. All prices, fantasy points, and analyses are based on DraftKings’ DFS platform. If you are unfamiliar with what cash games are, or if you are interested in my basic strategy, click here.

I manifested a smash last week and that lineup delivered in a big way. I ran into the stone nuts, as my team included Mixon, Fields, and Etienne. By the end of the late window, my team amassed 210.12 DK points, the most I’ve scored in cash or GPP this year. Needless to say, I won 100% of my head-to-heads, also the first time that’s happened this year.

Let’s try to replicate those results in Week 10.

This slate is pretty thin at QB, especially with Josh Allen trending towards not playing, so I’m happy to play Justin Fields ($6,300), albeit at a much higher price than last week. Even with the increased salary, Fields is one of the better plays this week, especially in cash. His running ability, paired with the Lions’ horrendous defense is a match made in fantasy heaven. The only other QB I considered here is Mahomes, but I think Fields is essentially a similar play with a lower salary.

Paying up at RB has been a strategy I’ve employed quite a lot this year, and it will continue in Week 10. Saquon Barkley ($8,600) is no doubt pricy, but he has an intriguing matchup against the famed Texan run defense. Barkley has been the epitome of reliability, logging no less than 11.8 points in a game, and only less than 15 points once. He has slate-breaking ability but it’s his true floor that makes him such an appealing play, especially with the salary I’m saving at other positions.

I’m also paying up for Derrick Henry ($8,300), meaning I’m playing the two most expensive RBs options on the main slate. Denver has a ferocious defense, though their Achilles heel is their run defense. The Titans are committed to establishing the run and will have the opportunity to do so against Denver’s front seven.

I wanted to play one expensive WR, but it didn’t work out because there aren’t any punt RB options, so I had to pay down at WR across the board. Allen Lazard ($6,100) almost didn’t make the lineup, but I had the extra $100 to get up to him from JuJu. Although the Packers’ offense has been underwhelming, Lazard has been solid, acquiring at least 6 targets in every game since Week 3 and he currently sits as the WR19 in PPG. The Packers are in desperate need of a reliable WR and Lazard is exactly that, if unspectacular. He’s likely not winning any slates, but he’s a good floor option at his cost, hence why he made my cash lineup.

I was surprised to see Rondale Moore ($5,200) remain at his salary from last week after racking up 10 targets and scoring a respective 14.9 DK points. Similar to Lazard, he’s probably not breaking any slates, but he racks up targets, and that’s what I’m looking for at WR in cash. He might even see a boost in usage this week if Jalen Ramsey shadows his teammate DeAndre Hopkins and shuts him down. Moore was a great cash play last week and he remains one this week, so I’m running it back.

Treylon Burks ($3,000) is what makes this lineup work. He was designated to return from IR this week and is on track to play on Sunday. I imagine his reps will be limited, but to get a talent like his on an offense in desperate need of pass-catching options at the stone minimum is a gift horse I will not look in the mouth. If Burks ends up being ruled out or his role appears to be significantly limited, check back here on Sunday morning and I’ll make some switches in this lineup.

I considered playing Tanner Hudson ($2,600), but I had the salary to get up to Dalton Schultz ($3,800), and thus I’m playing him. Schultz was almost invisible while Dak was out, but since Prescott’s return, Schultz has posted 9.9 and 13.4 DK points, both great outcomes at his salary. We’re not far removed from when Schultz finished as the TE3 in 2021 with Dak Prescott under center. I’m in on Schultz going forward if his price stays under $5,000.

Though the Texans have been an outright disaster this season, Damion Pierce ($6,300) has been a much-needed bright spot. Since Week 3, when Pierce really took over the backfield, Pierce is the RB10. Additionally, he draws a favorable matchup against the terrible Giants’ run defense. His price is probably about right, but he’s a value this week against New York.

As I mentioned earlier, Josh Allen will likely be out, so Minnesota DST ($2,200) is the obvious cash play. They lack talent, but I’m not worried about a Case Keenum-led team running up the score. Minnesota will be mega chalk in GPPs, so I’ll stay away from them there, but they are a perfect cash play.

Treylon Burks being activated off of IR after prices were released is exactly what makes cash lineups easy (and fun) to build. Playing him, Schultz, and a cheap DST allows me to get up to Barkley and Henry, while I fill in the rest of the core with value plays like Fields and Moore.

As an aside, if any major updates affect this lineup, check back for an updated version. 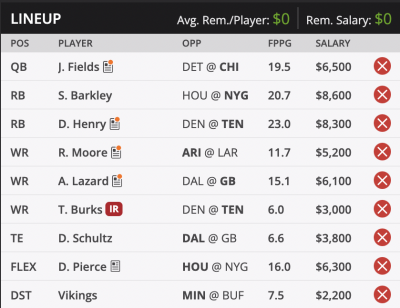