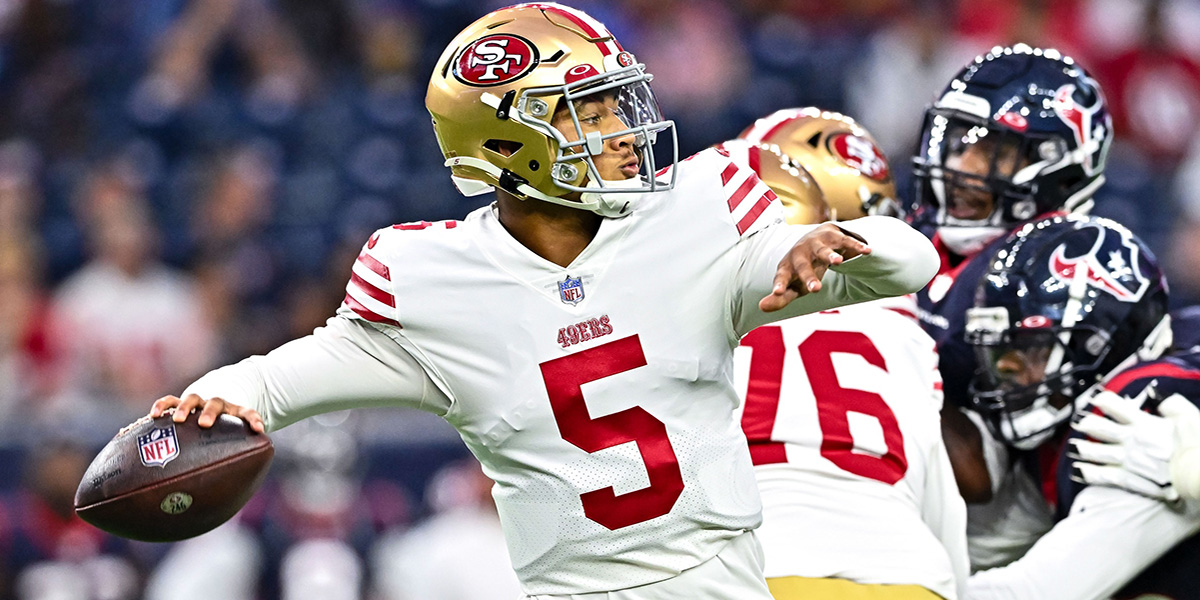 Welcome to the first installment of a weekly series where I provide you with what I think is the optimal cash game lineup. All prices and analyses are based on DraftKings’ DFS platform. If you are unfamiliar with what cash games are, or if you are interested in my basic strategy, click here.

Lineup Construction Tip: Pay close attention to sportsbook odds every week, they paint a far better picture of NFL game scripts than you may think. While sports betting was frowned upon for years, things have changed, and some of the best betting promotions are with first-time signups. It’s good to compare weekly odds and pay attention to line movement. As things shift, you will have a betting understanding of what the public thinks, and allow you to go against the chalk every week.

This might be my favorite part of my lineup. Week 1 is going to provide us with likely the lowest prices we’ll see all year for the young mobile guys like Trey Lance and Justin Fields. Both of these guys are great plays at their salaries of $6,000 and $5,600, respectively. I’m playing Lance this week because he provides a little more safety and more upside at only $400 more. He will never be this cheap, so slot him into your lineup for only $6,000 while you can.

Here is an example of where I’ll eat the chalk. Christian McCaffrey at $8,500 is a steal, especially considering that he’s only the third most expensive RB on the main slate. He’s healthy this week and that’s all we care about. He’s an easy play in Week 1.

There are weeks where an RB is such a screaming value that he is a must-play, without hesitation. This is one of those weeks and that player is Dameon Pierce. His salary of $4,800 places him outside of the top 50 RBs (by price) despite being a starter. Don’t overthink it: play Pierce.

I don’t believe there are any “must plays” at WR, but I have identified three guys who I think make sense based on my build.

The first is Justin Jefferson. Since I spent down at QB, RB2, and TE (see next section), I can afford to break the bank and slot Jefferson into my lineup. The Vikings host the Packers in what should be a great contest. Jefferson should provide a high floor with a little upside if Jaire Alexander is having a rough day.

Marquise Brown is another more pricey option at $6,200, but I think he’s a value even at that price. The Cardinals are playing the Chiefs in a game that profiles to be a shootout without DeAndre Hopkins (suspended), Rondale Moore (out), and possibly Zach Ertz (questionable). Marquise Brown could easily see a 30%+ target share in a potentially high-scoring game.

I love the value we’re getting this week with Michael Pittman Jr. He has an ADP of WR9 in fantasy drafts but is being priced as the WR23 on DK. He will face the Texans on Sunday, a team that struggled in the secondary in 2021, ranking 30th in yards/completion allowed. Pittman is an excellent fit into this cash lineup.

Like most weeks, I’m punting on TE in order to afford guys like McCaffrey and Jefferson, but I’m thrilled to plug Gerald Everett into my lineup for only $3,800. I’ve been high on him all throughout the offseason and I’m not stopping now. Justin Herbert targeted TEs in LA 137 times in 2021, with most of those going to the shell of Jared Cook. Everett is a younger player who was underutilized in Seattle and now gets to play with one of the game’s best QBs. Expect his price to increase as the season goes along.

Anytime you have the opportunity to play WR in the flex, you do it. Without many obvious RB plays, this is a great week to do so. I’m selecting JuJu Smith-Schuster to fill that void. There was a time not too long ago when JuJu was valued among the best WRs in the league. Due to injuries and the carcass of Big Ben, the former USC star has delivered back-to-back sub-optimal seasons. He’s only in his 6th year in the league and now he gets to catch passes from Patrick Mahomes in an offense that is sans Tyreek Hill. At $5,200 JuJu is a fantastic flex play in both cash and GPP this week.

I’m playing the Vikings DST this week in cash. It’s not the best play on the board, but at $2,200, I think Minnesota is a fine play if you want to punt on DST. The Packers will probably be good this season, but they might look sluggish in Week 1. Davante Adamas is in Las Vegas, Allen Lazard is doubtful, and both tackles David Bakhtiari and Elgton Jenkins are questionable. Rodgers could be facing pressure all day without anyone to throw to. This is a great spot to play Vikings DST.

This lineup is a good mix of projectable volume, underpriced players, and upside. Punting on TE, QB, and RB2 allowed me to pay up for CMC and Jefferson, both of whom can carry the team if some of the players are disappointed. 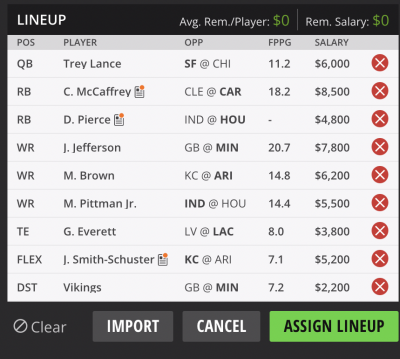