Howard Eskin believes there’s a 90% chance Deshaun Watson will be traded to the Eagles.

John McClain: ‘Deshaun Watson will not be the Texans’ starting quarterback this year’

The first half of July is a slow news month for the NFL, and a lot of beat writers are filling that void talking about DeShaun Watson trade rumors.

The NFL is certainly taking its sweet time with a probe into Texans’ Quarterback Deshaun Watson’s situation. Which has made the guessing game nearly impossible to what could happen. If you’ve been living under a rock, there are 22 active civil lawsuits, each filed by women who say Watson engaged in some form of sexual misconduct toward them during massage appointments, including exposing himself, and in two cases, sexual assault by forcing oral sex.

I’m not going to speculate on the result of Watson’s legal situation. I will say I have heard that he may never play again.

But considering the there is not a lot of NFL news, I will, however, address the trade rumors that are circulating about Watson as this is a fantasy football site, and I think there are a ton of people very curious about what the future of the young QB will bring, and what action they should take in Dynasty leagues moving forward.

For starters, the main reason so many beat writers are connecting the dots with the Philadelphia Eagles as a top landing spot destination is their three first-round picks in 2022.

Considering Eagles QB Jalen Hurts is unproven, the Eagles seem like an easy spot to predict as a future landing spot for Watson. But there is one key factor everyone is forgetting …money. 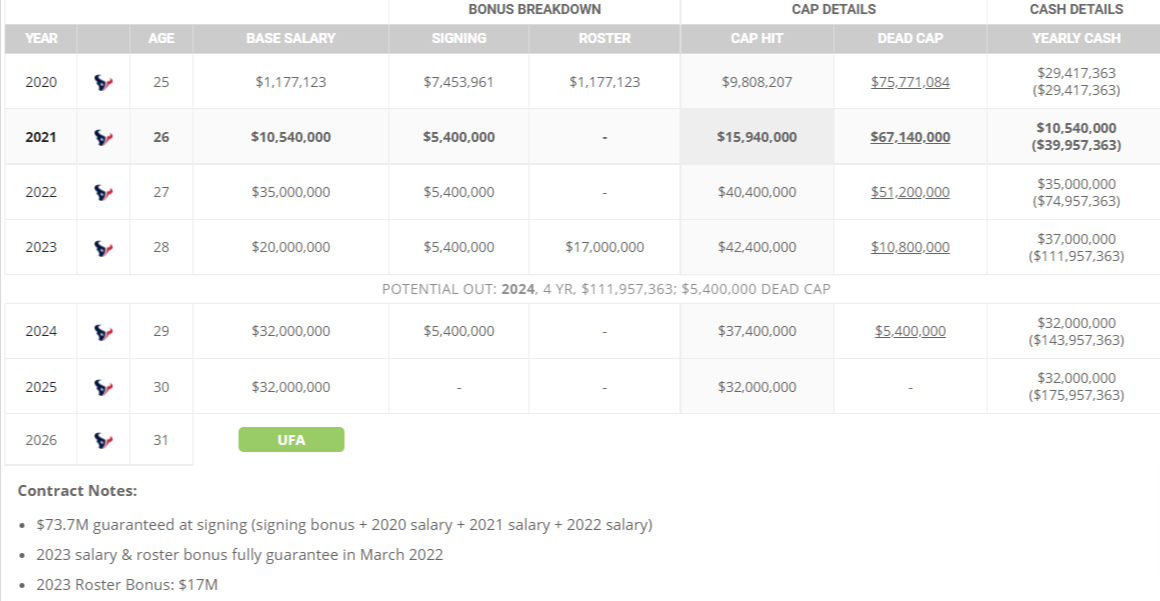 The Eagles are projected to have $17 million in cap space in 2022 but have a handful of free agents they need to address, including Dallas Goedert, who will be coming off his rookie contract, and looking to see big dollars.

While the idea of trading for Watson may excite a lot of Eagles fans, I think the team should see what they have in Hurts. Purely from just a business decision alone, Hurts costs nothing to be the team’s starting quarterback which helps the Eagles from a salary cap perspective. Hurts currently is the cheapest starting quarterback in the NFL, ranking 36th in QB contracts.

There is also three first-round picks on the table, which in the NFL is the equivalent of gold bars. While I’ll agree Howie Roseman hasn’t been sharp in years past with his decision-making on Draft day, the team could land elite talent with their three picks next year and get one more cheap year out of their quarterback before having to decide to pay him. The leverage in having a starting QB in the NFL with an affordable contract is massive.

Personally, I think it’s too risky to trade for Watson. Even if he is able to escape these lawsuits, fans will not let him forget his mistakes.

From a Dynasty Football perspective. I would be selling. The NFL does turn a blind eye to certain things and there is a chance he could return without any major setbacks, but this isn’t one lawsuit, this is 22. the league will likely come down on him hard.