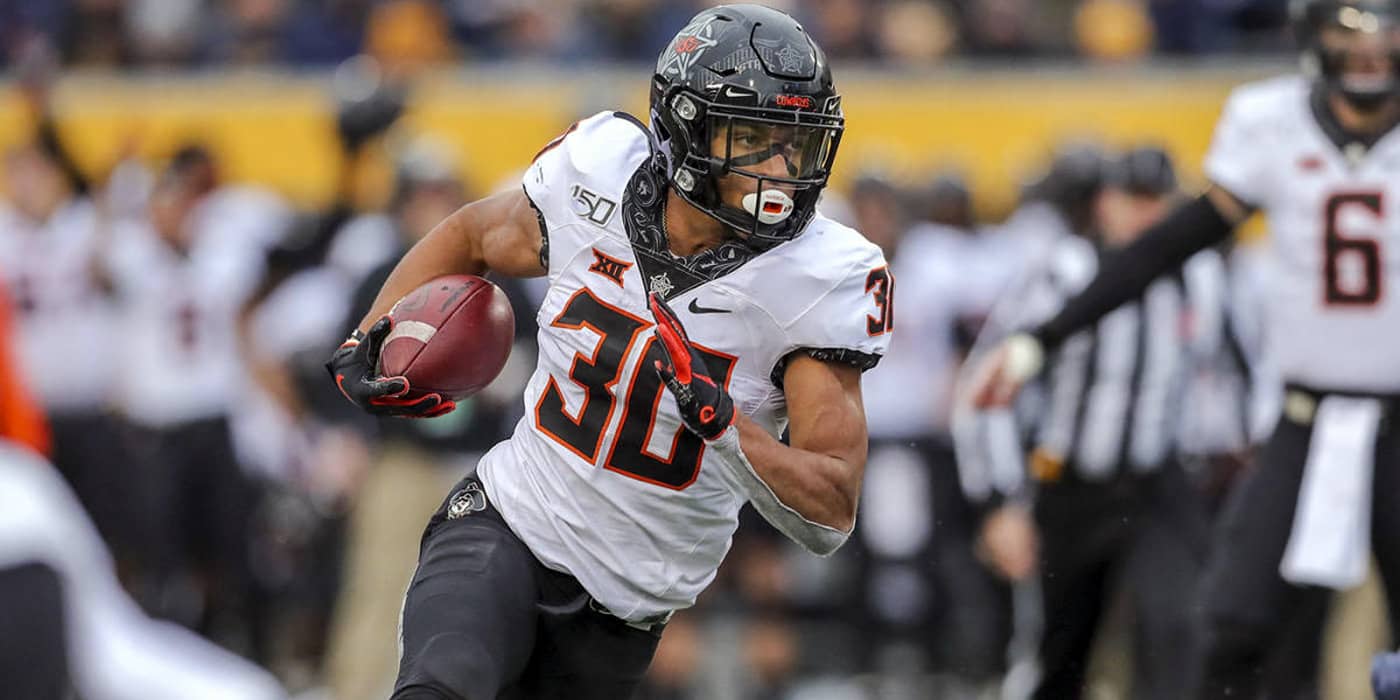 It’s easy to take one look at this 2021 draft class and see that talent is overflowing. Teams are going to be able to spend high draft picks to get players that are going to be cornerstones of their franchises for years to come. We are going to see a plethora of wide receivers come in and reset the bar for what it means to produce in the NFL, just like we saw with running back last year. However, don’t look past this years running back class either. Everyone is in love with Najee Harris and Travis Etienne and rightfully so. The best part about that is, you’ll see guys like Oklahoma State’s Chuba Hubbard go criminally late in this year’s draft.

For those of you that haven’t heard of Hubbard before (and it’s a shame if you haven’t), let’s do a quick overview of this man. Standing at exactly six foot and weighing in at 207 pounds, this Canadian-born playmaker was the NCAA’s leading rusher in 2019 with 2,094 yards and 21 touchdowns (328 carries). Tack on an additional 198 yards receiving and you can see why there were whispers of a Heisman trophy in his future. 2020 proved futile for many players in college and Hubbard was no exception totaling just 625 rushing yards and 5 touchdowns (133 carries).
Pros

Due to the regression in Hubbard’s stats (which most players always have), he is a lot lower on draft boards than he was a year ago. There’s a lot to love above his game though. For starters, his low center of gravity is essential to his game plan. Remember all of the buzz that Clyde Edwards-Helaire got last year for this? Hubbard is cut from the same cloth. When you watch him run, you’ll see just how physical he is. He easily breaks through countless arm tackles as if it was a spider web that touched your face. What’s even better is that if he gets hit high, his legs keep churning and he uses all of the strength he has to fight for those much-needed extra yards. Heck, he pushes whole piles and breaks out of high tackles too!

When you watch Oklahoma State’s offense, you’ll notice how heavy of a zone-run scheme they implement. This must be kept in mind when thinking of landing spots and production for Hubbard at the next level. He is one of the most patient runners in the nation and excels at a high level when afforded that time utilizing incredible vision. Once the ball is in his hands, you’ll commonly see him stop and wait for his blocks to develop in front of him, seemingly deciding what lane to hit regardless of where it is. Once that lane develops, be it on the front or backside of the offensive line, one foot is planted and a cut is made and Hubbard explodes like a paintball being shot with 4 cans of CO2.

His athleticism also plays a huge role in his ability to make big plays look seemingly effortless. Once you see Hubbard make it past the point of attack, he’s essentially off to the races. For as big as he is, Hubbard has above-average speed and is as quick as a hiccup. This helps him create much-needed separation from defenders (even though he can take a hit). Obviously, we all love seeing physical runners, but I think we look past the wear and tear that comes from taking those huge hits that are so common. Yes, Hubbard won’t go down easy, but his ability to make people miss and leave others looking at his back will help him thrive in the NFL for many years to come.
Cons

Now, for everything that Hubbard does well, there are some drawbacks to his game. Unfortunately, Hubbard was not afforded the luxury of being in many pass blocking situations as he was usually taking a handoff or running routes. This can be problematic for him in his transition to the NFL as most NFL teams looking for a complete back are going to want to utilize pass blocking from the running back position than in college. Hubbard just doesn’t have the necessary skill set to be a consistent blocker. This can be learned, but going up against polished NFL rushers is a lot more difficult than college rushers.

His ability to catch passes is decent at best, but it’s the technique behind this that concerns me. Frequently, you’ll see Hubbard use his “numbers” to catch a pass rather than his hands. He has the ability to adjust to the pass and make somewhat acrobatic plays, but it almost seems like he’s doing it because he doesn’t feel comfortable catching the ball. I get vibes of him being out of position to make a seemingly easy catch and if he does catch it, he must compensate which gives the catch a “wow” factor to it. Hubbard only handled 53 passes in his entire collegiate career, which is usually a number that top running backs get every season in the NFL. Don’t anticipate him to be a PPR darling unless he improves in a major way.

At the NFL level, Hubbard is best utilized as a “1b” or complimentary running back. I don’t see him having the skills needed to fully be able to handle a workload that most NFL teams are looking for. He must also land in a zone-run scheme where his talents can be best utilized or he will fizzle out faster than the glorious 5 seconds of chewing bazooka bubblegum. Hubbard has the skills to potentially turn into a #1 running back for a team, but he has a long way to go in the receiving department to put him there right now. Look for him to see minimal playing time unless he is thrust into a role due to injury or trade-in the 2021 season.