Cheap NFL Jerseys Are They Worth It?

The quality of NFL jerseys is definitely up for debate these days, especially if you’ve purchased a jersey in the past couple years and compare it to what is being sold at NFL Shop now.

A great example for me was my Nick Foles jersey from 2013. After Foles magical 27 TD and 2 INT season, I bought his jersey from NFLShop. I thought he was the quarterback of the future and happily paid top dollar for his jersey. Of course his following season he broke his collarbone and was placed on IR. He was then traded to the Rams the year later. When Carson Wentz was drafted, I thought I’d give it another shot, as the team did at least invest a high draft pick in him. I again ordered a jersey from NFL Shop but when comparing the two jerseys, five-years apart, there was a noticeable difference. The new Wentz jersey had a different style, it was thin, and felt a lot like a really nice t-shirt. Both Jersey’s were made by Nike, both cost roughly the same.

A friend of mine decided to take a different approach with his jersey and ordered a cheap NFL jersey online, I think it was from China. While he bragged about the price of the jersey, the cost of shipping was twice that of NFL shop, and something no one ever seems to mention when talking about these magical counterfeit “deals.”

We compared the jerseys when he came over for a game and I’ll admit it passed the eye test from a distance, but up close you could see some (laughable) differences. For starters, the Eagles logo looked like it was drawn by someone who drunk. The color of the jersey was off and the numbers seem larger than usual.  I’ll admit, it was cheaper even with factoring in what he paid for shipping, but I’m a diehard fan, and don’t want to wear a cheap knockoff.

That being said, I don’t blame you if you do buy a cheap jersey from China. NFL Jersey’s are overpriced and the quality has gone way down since Nike took over.

It doesn’t help when the NFL tries to lay a guilt trip on its fans, like the Michael Irvin commercial in which he accuses those who wear counterfeit NFL jerseys as posers or non-fans. This commercial was on a heavy loop a few years around the time of the NFL Combine. After maybe the 15th time I saw it, my blood began to boil and I actually wanted to buy a cheap NFL jersey out of spite. How can the NFL create a commercial that tells people to stop buying cheap NFL jerseys from China when the NFL sells overpriced jerseys made in 3rd world countries?

If you do decide to buy a cheap NFL jersey, here are some tips you should know:

Merchandise from NFLShop is definitely overpriced and I don’t appreciate the NFL making a commercial and taking shots at my level of dedication or devotion as a fan just because someone decides to buy a cheap NFL jersey. The NFL could easily prevent people from searching and buying these crappy knockoffs if they just priced their jerseys to cater more to the public.

Still, even at a bargain of nearly 50%, I do not recommend buying a Cheap NFL Jersey from China. These jerseys cost around $40-$50 but will not last a full season. The jerseys are lower quality in every way shape and form, and your jersey will stand out amongst a crowd. I probably wouldn’t have as many complaints about the knockoff jerseys if Reebok was still the main provider for the NFL, but since Nike has taken over the quality has really become noticeable.

The NFL has officially licensed its brand to third-party companies. This means companies not named Nike have the legal rights to use real NFL logos to create unique new merchandise. One of the companies is called OTS and the other is called ICER Brands, both seem to sell their line exclusivity on Amazon. Both offer NFL merchandise but in a different style than you’d see at NFLShop.  They are a huge upgrade to Cheap NFL Jerseys From China and a better option if you aren’t a fan of NFLShop

Amazon offers FREE lighting fast shipping, so there is an added bonus to maybe searching for swag there before going somewhere else. If you’re looking for something different, maybe you should check out these two sites. 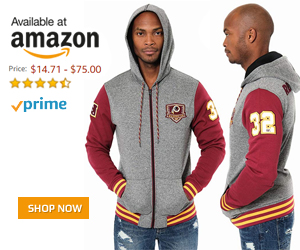