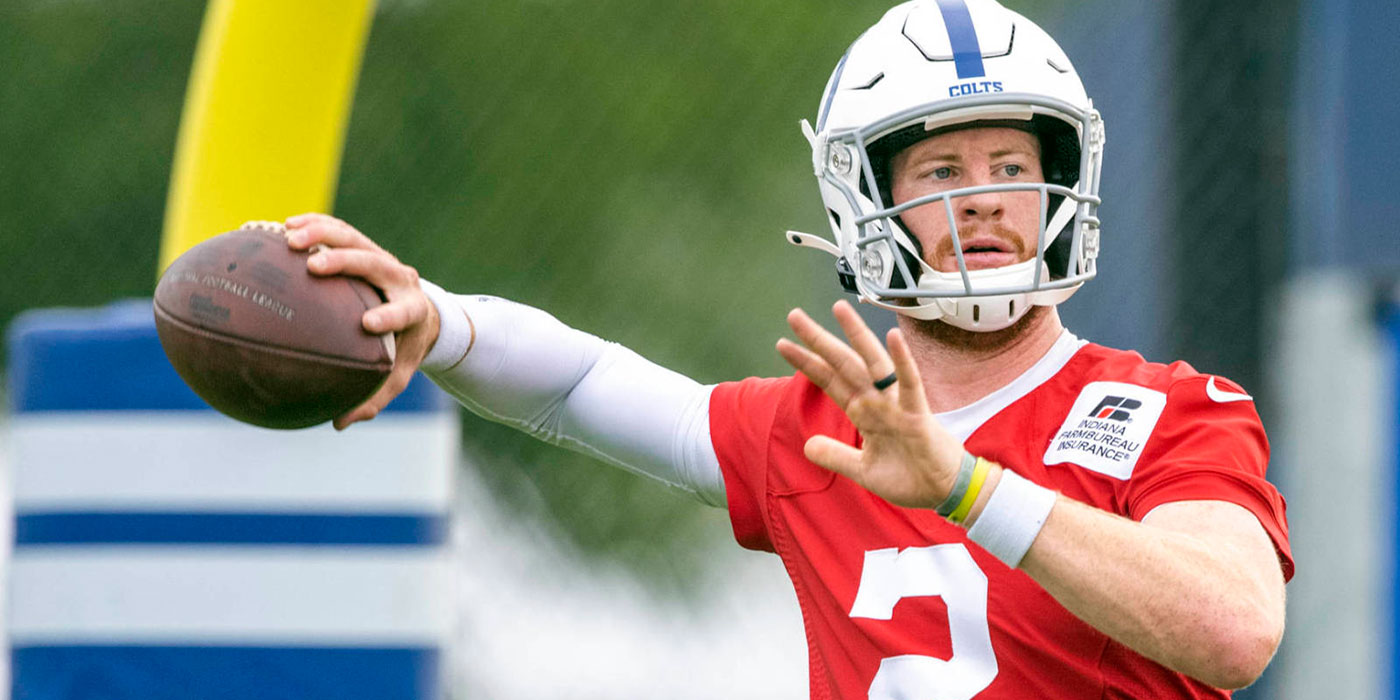 After participating in just two practices, newly acquired Colts quarterback Carson Wentz is out indefinitely with a foot injury. Wentz has had a long list of injuries in the past, and fans are worried this could have an impact on the 2021 NFL season.

According to a report from NFL Network, Wentz will visit foot specialist Dr. Robert Anderson, this week. After which, a timetable for his possible return will be formulated. It should be noted that early reports are that Wentz will NOT miss the 2021 NFL season.

This is a terrible way to kickoff Wentz’s “fresh start” after leaving the Philadelphia Eagles. However, after checking the opening line in the Colts’ season opener against the Seattle Seahawks, there has been no movement. Meaning if the sports betting industry felt this was a significant injury, the spread against the Hawks would change or at least be taken down. That’s at least some positive news. Sportsbooks usually have an inside edge on such injuries, making it still possible Wentz could be NFL game day ready for week one.

When the trade was made between the Colts and Eagles for Carson Wentz, debates on who won the trade leaned heavily towards the Colts. However, after this recent injury, Eagles fans are thankful that Howie Roseman moved Wentz when he did.

To recap, the Eagles agreed to trade Wentz to the Indianapolis Colts for a third-round pick in the 2021 NFL draft and a conditional second-round pick in 2022 that can turn into a first-round pick if Wentz plays 75% of the snaps this year or 70% and the Colts make the playoffs.

Obviously, if Wentz doesn’t play enough snaps the Eagles will not receive a first-round pick, but if the injury is significant the Birds got a second-round pick for essentially nothing.

Colts fans were excited to see Wentz boost the team’s passing attack in 2021, however, I had projected the Colts offense to lean heavily on the run game this season. Jonathan Taylor is one of the league’s bright young stars and behind an excellent offensive line. Fantasy owners have made JT a first-round pick this season, which is very deserving.

It’ll be interesting to see if a Wentz injury drops JT’s ADP. The general consensus could lose faith in the team’s offense as a whole, but realistically, the Colts may lean more on their running game to compensate in the time Wentz is out. I don’t plan to lower JT in my RB Rankings. Keep an eye out on Jonathan Taylor’s ADP. If it slips, I for one would happily snag him wherever he falls.

The Colts receiving group weren’t exactly high ADP targets as you can see from FantasyData’s ADP page. Their ADP page features a tracker, so you can see if players are moving in one direction or the other. The Wentz injury really should impact Colts players too much, as outside of Taylor and Pittman, nobody had an ADP inside the top 100 players.

We need to wait on Wentz’s injury status. But even if he misses a couple of weeks I personally won’t draft him no matter what round he falls. Wentz is very injury-prone and I think there are better late-round quarterbacks to target. As for Jonathan Taylor, I really would love it if I could get him at a discount. I expect a slight drop for JT and we could see him going with the last pick in the first round of drafts soon.