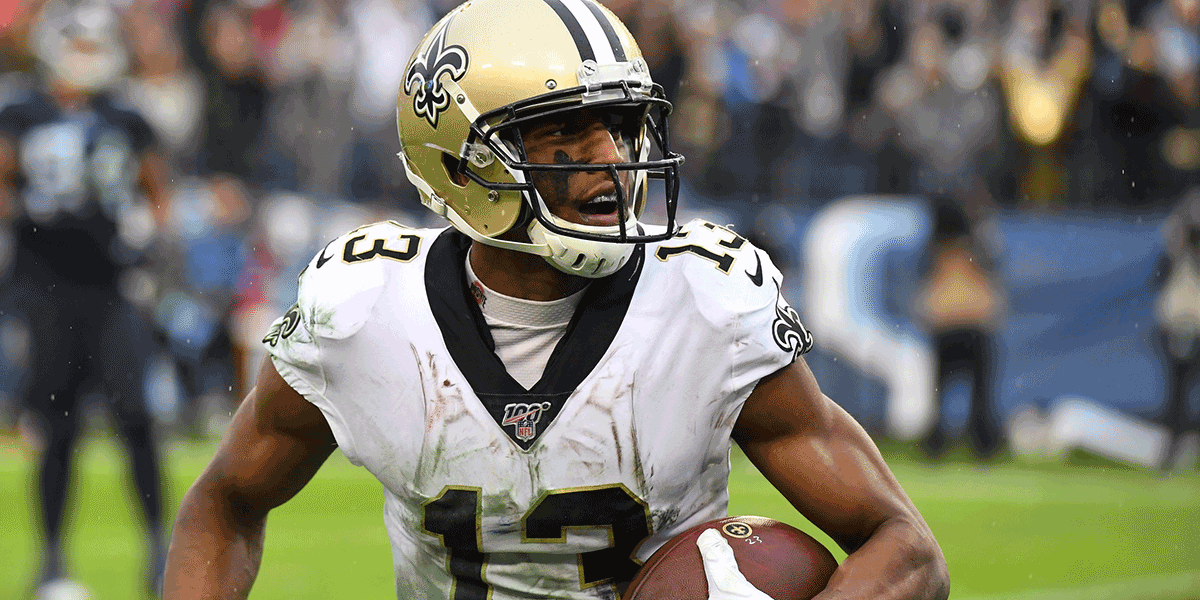 Regardless of how good or bad your team is doing, it’s time to start getting serious about some trades. The trade deadline is starting to sneak up in many leagues, and one move could be the difference between missing the playoffs and winning the championship in your league. Today, we are going to look at three players you should try to buy-in on and three players you should look to move away from:

Godwin has been just okay since returning from his injury, catching a good amount of passes but not really doing much with them. The Buccaneers offense has been struggling so far this season, but that’s bound to change at some point and they will start scoring some serious points. Godwin’s value is at a low right now after his injury and a couple of sub-par weeks, but he should be a quality WR2 at an affordable price moving forward.

I’ve noticed that the price you can get for Michael Thomas varies wildly from manager to manager. Some believe in the comeback and believe that his foot injury was only a minor setback, but others firmly believe that he is unreliable and more of a burden than an asset. Thomas hasn’t seen the elite volume we had hoped for even while healthy, but he has shown that he still has high-level talent on the field, and that should be enough. Go see if the Michael Thomas manager in your league is a believer or looking to sell him, and see if you can get him at a value ahead of his likely return in Week 6.

Kittle has been bad for fantasy so far this season, missing his first two weeks due to injury and failing to log double-digit points in any game yet. As a result, his value is at rock bottom. Like Kyle Pitts he was a pretty high draft pick, and he still has the potential to turn things around, especially with Jimmy Garoppolo at the helm for the Niners. Kittle has been inconsistent for fantasy over the past couple of seasons, but he really makes his hay on his boom games. He hasn’t gotten much for those so far this season, but that seems likely to change. Even if you don’t trust starting him, it’s worth trading for him at his dirt-cheap price in hopes that his value rises in the coming weeks.

Davis is by no means a must-sell, but it’s worth going out and seeing what you can get for him following an explosive Week 5 performance. He has the capabilities and skills to continue having explosive weeks as the season goes on, but he has struggled seeing consistent volume and that could lead to him being inconsistent week-to-week. Also consider the fact that pass-catchers Isaiah McKenzie and Dawson Knox are coming back to possibly vulture more targets from the third-year receiver. Go find that manager who really believes in the Gabe Davis breakout and see what kind of deal you could get for him while his value is peaking.

The fantasy community seems to be at a consensus about this one. Cook is coming off of a season-best game in which he scored two touchdowns against the Bears last week. His production otherwise hasn’t lived up to expectations this season, and Alexander Mattison continues to eat more into his workload little by little each week. He doesn’t have quite the same receiving upside he once did, and while he’s still good for a touchdown or two every couple of weeks, he just isn’t the locked-in RB1 he was drafted to be. Try to trade Cook after an explosive Week 5 performance.

Carter has clearly taken the backseat in this backfield to Iowa State rookie Breece Hall. He has seen his touches and snap share decrease exponentially over the course of the season, and there’s no reason to think he will get back to his early-season workload. He is, however, coming off of a two-touchdown game last week that salvages some of his fantasy value. There’s a league manager or two out there that will look at his production last week and think he’s a solid asset, and any fantasy managers of Michael Carter should look to cut their losses and see what they can get for the second-year running back before his value plummets even further.