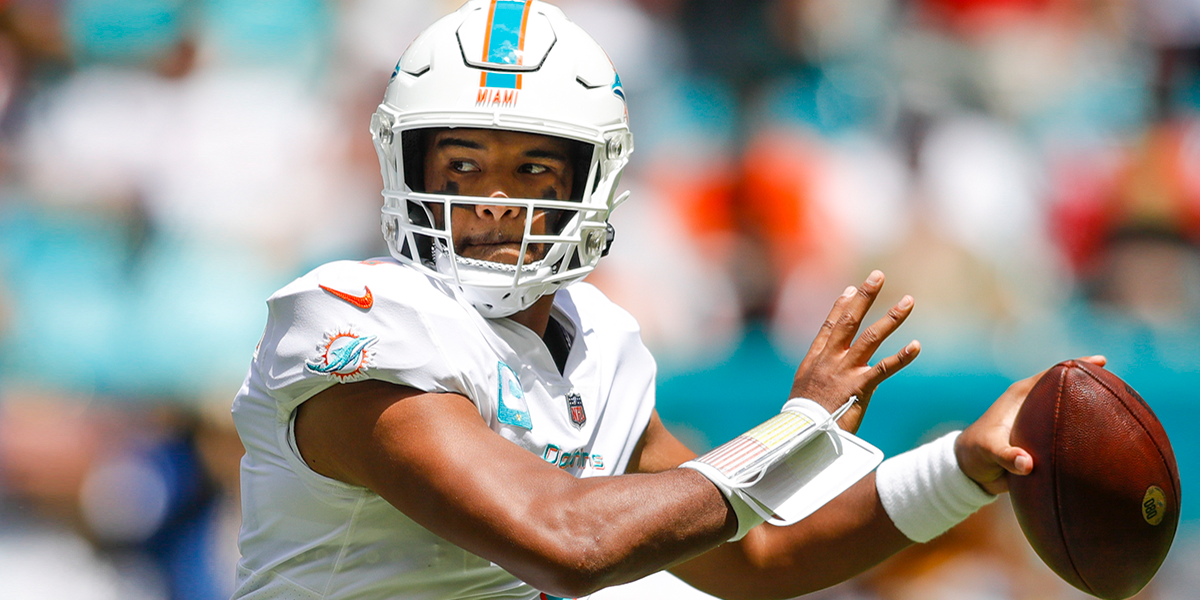 If you write bold prediction articles every week, you are bound to miss a few times. Last week, I had a few misses. Let’s start with the hits from Week 7  because I consider myself to be a positive person. I hit the nail on the head when predicting that Ezekiel Elliott would finish as a top 12 RB play in Week 7 as he finished 8th in standard leagues, 10th in half-PPR, and 12th in full-PPR. However, that was my only true bright spot in a rough week but I’m proud of it. Now, I’ll go over the misses because being accountable in this business is almost as important as being right (Although, being right feels pretty, pretty good). Patrick Mahomes did Patrick Mahomes things and looked great against a tough defense, Denver did in fact score a single touchdown, Lamar Jackson was not the QB1 (and wasn’t even close), Nick Chubb finished with a respectable line, and Aaron Rodgers looked better but wasn’t able to spread the ball around as I thought he would. I will say that we were on the right track for half of these and there are better days ahead for the weekly bold predictions article. For those of you who are still with me, let’s get bold in Week 8.

Tua Tagovailoa finishes inside the top 5 for the week

The history is there for Tua and the Dolphins. As we witnessed in Week 2, this passing offense can take advantage of weak defenses. The third-year quarterback proved he can feed his receivers and take what the defense gives him. This week, that’s exactly what I think they’ll do against an awful Detroit Lions secondary. Through seven weeks, Detroit has allowed the fourth most fantasy points to opposing quarterbacks. This is a smash spot for not only Tua but his weapons as well. Every other week since Week 2, Tyreek Hill has gone over 160 yards receiving. That trend can absolutely continue this week against a defense that allows almost 250 passing yards per game. I don’t expect Tua to throw for 469 yards and six touchdowns like he did in Week 2, but I do expect him to throw for 275 yards and three touchdowns in a great matchup. The Dolphin’s passing attack should be able to feast on the Lions in Week 8 like I plan to feast on Reese’s Pieces on Halloween night. Now that my bad Halloween reference is out way, we can really start to heat up.

Jonathan Taylor bounces back in a big way

For the fantasy managers that took Jonathan Taylor with the first overall pick in their drafts this season, I feel for you. Things have not been smooth for the consensus top pick in redrafts. However, there is a light at the end of the tunnel. Last season, a season in which he finished as the RB1 overall, he was just the RB12 in fantasy points per game through Week 5. This season, he is RB22 in points per game through five weeks played. I’m not sure if he will see a meteoric rise in production like he did last year, but I don’t expect him to be outside of the top 10 at the season’s end either. Now, if he were to go on a tear and start slashing through defenses like Michael Myers does to that small town in Illinois, then this would be the week to get going (Okay, I promise that was my last bad Halloween reference). Taylor gets a cupcake matchup this week against a Washington Commanders defense that allows the ninth fantasy points per game to opposing running backs. There has been a quarterback change in Indianapolis (again) and I don’t expect the Colts to be lighting up the Commanders through the air. This should be a positive game script for Taylor and I fully expect him to take advantage. I predict Jonathan Taylor will score twice and eclipse 150 yards from scrimmage in Week 8.

Tony Pollard finishes inside the top 12 for the week

Ezekiel Elliott is likely to sit out this week with a knee injury, Dak Prescott is still warming back up after missing five weeks, and the Dallas Cowboys are playing one of the worst run defenses in the Chicago Bears this week. If there was ever a week where Tony Pollard could prove what we’ve all known for a while in that he is the superior running back in Dallas, it’s this week. There are no excuses for the fourth-year player. He is seventh in the NFL in yards per attempt among players with at least 67 rushes through seven weeks and looks as explosive as he ever has. He is elite when he has the ball in his hands, he just needs to prove he can carry the workload. He will get an easy matchup to do so in Week 8 as he faces the third-worst defense in terms of rushing yards allowed per game. He has shown flashes of RB1-caliber play over the last few years and this is his chance to showcase it as the starting running back. In a contract year, I’m expecting a sense of determination and urgency in a game he knows could be a deciding factor come free agency. I predict Tony Pollard will find the endzone at least once to go along with 100 yards or more from scrimmage.

Russell Wilson and the Broncos finally break out

Will I ever learn my lesson? I mean, why do I keep going all in on one of the worst offenses in football this season? Am I crazy? I’ve got to be the only one still holding out hope that Broncos country will, in fact, ride at some point this season. I assure you, I’m not just closing my eyes and throwing darts here, although it may seem like I am. Russell Wilson has been a good to great quarterback for 10 seasons and I think it’s reasonable to believe he can regain some of that momentum this season. As for the rest of the offense, some things need to be straightened out. The receivers have been good but can be better and that starts with Wilson. What really needs to step up is the offensive line. If they can hold up against a relatively underwhelming Jacksonville Jaguars pass rush, it should allow Wilson to scan the field and lead a successful offense as he’s been known to do for the last decade. I expect Russell Wilson to throw for 250 yards and three touchdowns in London against the Jaguars.

Carolina starts a winning streak after the CMC trade

I’m not sure if it was Tampa Bay just being bad or Carolina having something to prove, all I know is that it was fun watching this offense finally let loose a little bit in Week 7. After trading away Christian McCaffrey to the San Francisco 49ers, most thought the Panthers would fall down and tank. I’m not quite ready to buy into that just yet. This division is wide open for the time being. I mean, the Marcus Mariota-led Falcons are currently tied for first with the Buccaneers, while the Panthers and Saints trail by just one game. Carolina just traded away their franchise player and fired their head coach. This is a team with a fresh slate trying to build a culture. I think it started with the win against the Buccaneers last week and I think it continues with a win against the division-leading Falcons this week. Atlanta has a hard time stopping the run and Carolina is looking to run with their new committee of D’Onta Foreman and Chuba Hubbard. Meanwhile, P.J. Walker looked serviceable at quarterback in last week’s win and the team seems to have confidence in him. He’s feeding his weapons and that’s all you can ask for from a former third-string quarterback. Yes, winning two straight games counts as a winning streak and I expect them to be entering Week 9 with two consecutive wins under their belt.

This has been a really bad season for tight ends if your name isn’t Travis Kelce or Mark Andrews (No, I do not consider Taysom Hill to be a tight end no matter how many fantasy platforms label him as such). With that being said, the Arizona Cardinals’ defense seems to be fighting the good fight for that position every week. So far this season, the Cardinals have given up the second-most fantasy points to tight ends on a points-per-game basis. They seemingly ignore that position and let them run free. The latest to take advantage of this was Saints tight end Juwan Johnson who caught two touchdowns against them last week. I don’t know if I will go as far as to say Irv Smith Jr. will score twice this week, but I am almost certain he will find the endzone at least once for the Vikings in Week 8. With Travis Kelce on a bye this week, the TE1 spot for Week 8 is up in the air. I wouldn’t be surprised if Smith Jr. is this week’s best at the position.