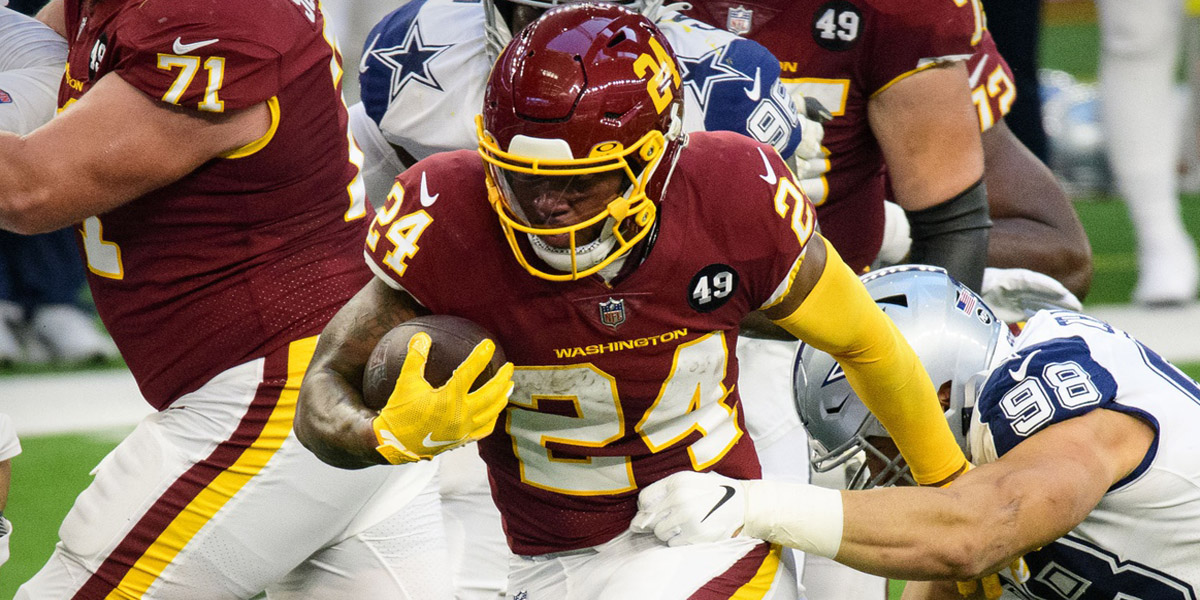 Antonio Gibson is one of the most polarizing prospects for fantasy football this year. There are two sides of the coin when talking about the young running back; there are those who will say that he has performed well and cite him being a top-12 running back last year, and there are those who will claim that he hasn’t delivered on expectations and won’t be a productive player for fantasy purposes this season.

Like all great debates, the truth probably lies somewhere in the middle. Let’s start with what we know. We know that Gibson is capable of finishing as an RB1. He finished as the overall RB12 last year and wasn’t far off of that mark during his rookie season, where he finished as the RB13 in PPR formats and just missed the cut by five points. We also know that he doesn’t miss a lot of time due to injuries. While Gibson has had his fair share of bumps and bruises during his first two seasons in the NFL, he has only missed four total games, and his availability has been a big part of his production.

That all being said Gibson is working in a crowded backfield. He has to deal with J.D. McKissic taking the snaps on third down and getting most of the receiving work out of the backfield. In fact, in games that McKissic was active for last season, Gibson averaged just 2.7 targets per game on a 53.5% snap share. Numbers like that won’t take him very far for fantasy purposes, and in addition to McKissic’s vulturing targets, Gibson may see reduced work with the team drafting rookie RB Brian Robinson Jr. out of Alabama in the third round of this year’s draft. Robinson likely won’t have a feature role in year one, but he was drafted with the same capital that Gibson was and he has been getting good reviews during the team’s offseason program.

Every morning I wake up and pray to the fantasy football gods for Antonio Gibson to get 80+ targets in 2021pic.twitter.com/91Tr2pdkqQ

Fantasy managers will also be turned off by his perceived disappointing season last year. Many people expected him to take the second-year leap into stardom, but he ended up disappointing many managers compared to the expectations they set for him. He was often getting drafted in the high second round of drafts, and that’s what made it seem like he had a disappointing season, despite ending up as a top-12 RB at the end of the season. So what does all of this mean for his outlook this year?

Currently, Gibson’s ADP is in the late third round, and he’s being drafted as the RB17. This is obviously a notable decline from his ADP going into last season, and his current draft position comes as a result of both his disappointing season last year and the question marks on the team with Carson Wentz and the other running backs.

Imagine handing off to this guy when Antonio Gibson is on your team.pic.twitter.com/tEUg94pkrE

This season, I think the QB situation is actually getting a decent upgrade. While Wentz isn’t anything to write home about, he is a decent quarterback that will be able to facilitate an offense better than any Washington QB did last year. However, he doesn’t usually seem to check the ball down to his running backs very frequently, and that fact paired with McKissic stealing most of the receiving work makes it hard to project much volume there for Gibson. He will likely get the bulk of the work on the goal line, but being on a sub-par offense like Washington’s, those opportunities may not come as frequently as fantasy managers would like. Under these circumstances, he will have to truly take the next step from a talent perspective to compensate for this below-average situation if he is actually going to be a difference-maker for fantasy football. If he doesn’t get to that next level this year, the team may start looking to move off of him as he approaches a contract year the following season.

All in all, Gibson projects to be a solid option for fantasy football this year. He will be better in non-PPR formats than in 1/2 or full PPR formats, but either way, he projects to be good, but not great. He has the talent needed to be an RB1 and he’s proven that he can, but the state of Washington’s backfield and the question marks about his workload doesn’t inspire much hope for him taking the next step. While he might not have the high ceiling that fantasy managers once hoped would be there, he does seem to be one of the safer options in that part of the draft. Gibson will likely be a solid, safe RB2 next year, and even though his draft price is a little high for my taste, he’s worth drafting at his current ADP only if he isn’t being relied on as the RB1 on a given fantasy roster.