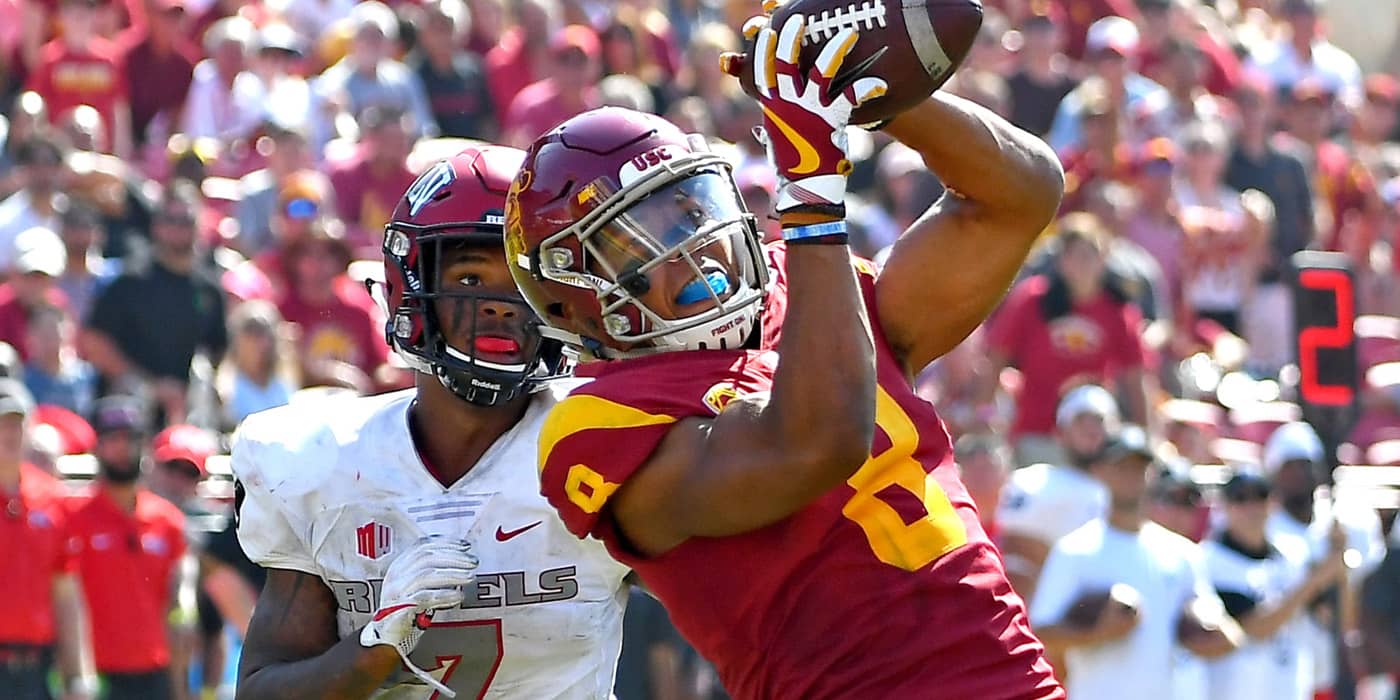 Amon Ra St-Brown started his career at USC, off with a bang.  As a true freshman, he played in 12 games while starting five.  He was on the receiving end of 60 catches on 86 targets, making up 25% of the team’s receiving production.  He was the fourth USC true freshman to lead the Trojans in receptions.

His freshman performance wasn’t just a flash in the pan. As a sophomore, he eclipsed 1000 receiving yards, amassing 1,042 on 103 targets and 77 receptions.  The 2020 season was cut short because of Covid, with the Pac-12 playing six games.  Although 2020 saw St Brown take more snaps outside (293 wide snaps), he was still on the field for 116 slot snaps, resulting in 41 receptions for 478 yards and seven touchdowns. His seven touchdowns led all Pac-12 receivers for 2020.

St-Brown’s father was a professional bodybuilder in the 1980s, s a two-time Mr. Universe and three-time Mr. World.  His father’s name is John Brown.  Mr. and Mrs. Brown have three sons. The eldest currently plays wide receiver for the Green Bay Packers, Eqaunimeous Tristan Imhotep J. St. Brown, and the middle son is a wide receiver at Stanford.  His name is Osiris Adrian St. Brown.

His mother, Miriam Brown, was born in Germany.  During his reveal to attend USC, Amon Ra St.-Brown thanked his mother in fluent German while thanking his European schoolmates in fluent French.

There is no question whether St Brown is an alpha on the field.  Witness the willing block he dispenses as his sideline approves.  The issues will be with his limited athleticism, length, speed, and frame going to the next level.

Examination of his strengths from the last word on sports draft analysis:

247Sports.com concurs, adding that his ability to adjust to passes may be his best trait.

His versatility will help him at the next level, as he had nine carries for 69 yards with a rushing touchdown in addition to 13 punt returns for 75 yards.

His weaknesses are mostly a product of his physical frame.  Although PFF had him ranked the eighth-best wideout in its midseason rankings for the 2021 NFL Draft, they concede that he does not win with pure speed and only saw press coverage 148 times in college.

The catchrule.com analysis restates what is becoming the most apparent weaknesses in St Brown’s game:

At 6’1”, St. Brown is bigger than most slot receivers, and his willingness to take on blocks adds to his functionality at the next level.  He will not win on speed and will have issues with bigger defensive backs due to his length.

The Baltimore Ravens could be a nice fit for St Brown.  With speedsters Marquise Brown on the roster and tight end Mark Andrews hauling in WR1 numbers, it is imperative the Ravens get some help in the wide receiving department.  Per Cynthia Frelund’s analysis, “the Ravens’ play-calling wasn’t aimed at deep attempts as often as other clubs’ play-calling was.” Their wideouts had the fewest receptions (137) for the fewest receiving yards (1729) as a position group last season.

Brown has the quickness and body control to get yards after the catch. He would immediately give Baltimore’s receiving corps a steady constant.

While the receiving class of 2021 is deep, and most of your dynasty GMs will be chasing Ja’Marr Chase, Jaylen Waddle, and Devonta Smith, do not sleep on St Brown.

Although predicted to run routes mainly in the slot, do not forget he is a precise route runner who has commanded the entire tree.  He can get yards after the catch, and his willingness to block will keep him on the field, which equals opportunity.

While his predictions in mock 2021 drafts have him going anywhere from late first round to third round, look to pick him up early second round in your dynasty drafts.