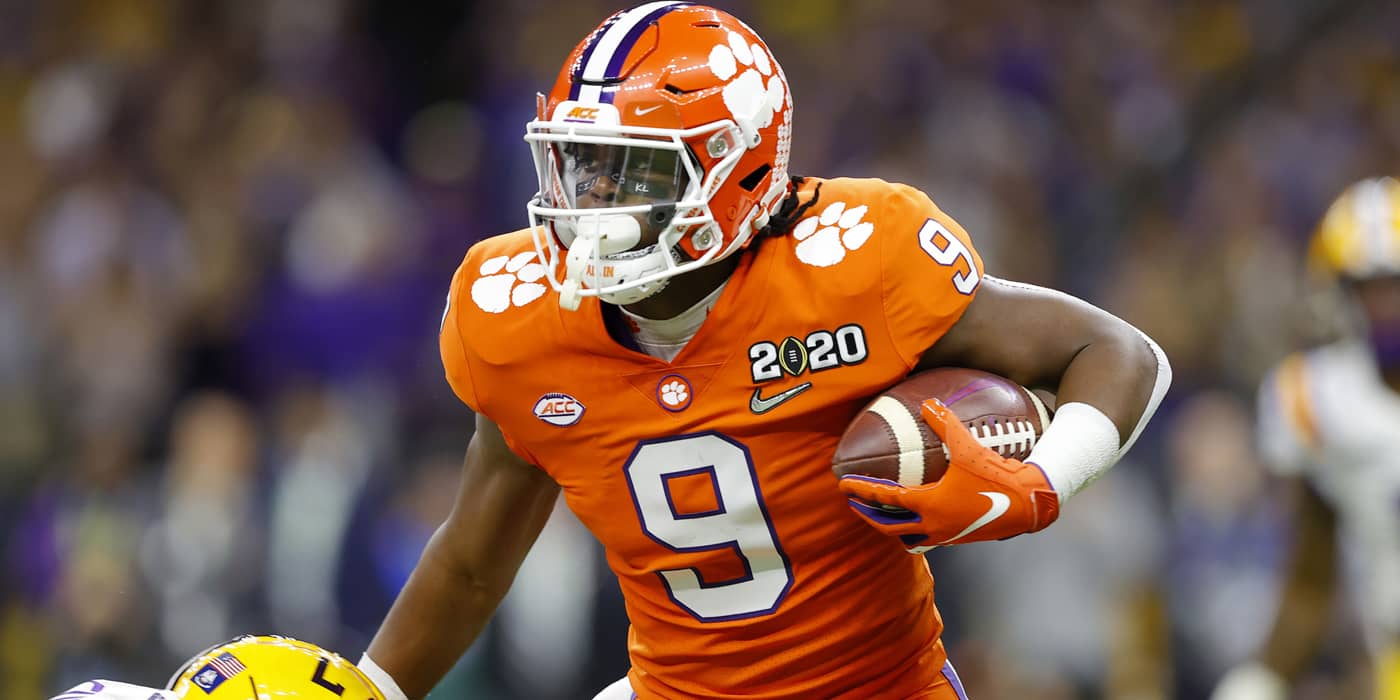 9 NFL Rookies to Have to Impact Not Named Chase, Waddle, or DeVonta Smith

While the NFL Draft may have an emphasis on team building for the franchises, presentation (like a four-hour first round) and ratings for the league, or Las Vegas Raiders drafting comedy spots, for us, it’s all about fantasy players values.

There were some juicy fantasy landing spots, but there were also plenty that is difficult to see a path to fantasy success. This includes New York Giants wide receiver Kadarius Toney, New England Patriots quarterback Mac Jones, and San Francisco 49ers running back Trey Sermon.

The first three wide receivers of this year’s NFL Draft, Ja’Marr Chase, Jaylen Waddle, and DeVonta Smith all found themselves landing on teams in the rebuild process. The Bengals, Dolphins, and Eagles all have sophomore quarterbacks with young coaching staff and should find themselves racking up fantasy points late in games thanks to “garbage time.” Because all three of these wide receivers should be obvious targets in the middle rounds of fantasy drafts, I have excluded them from this article. 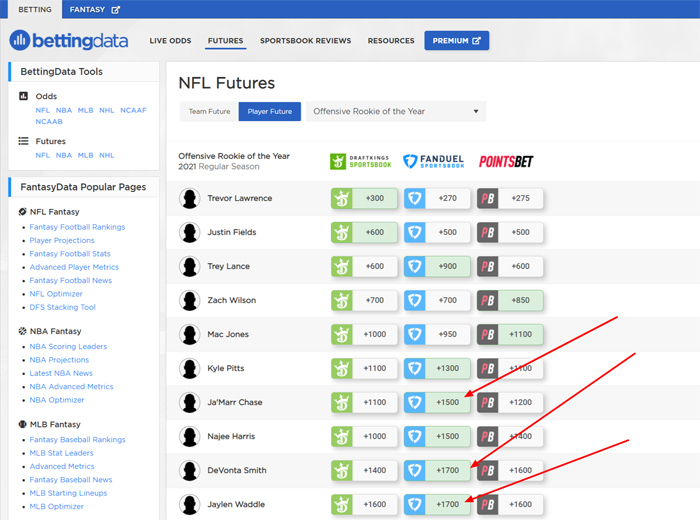 Shop for the Best Odds

If you’re thinking about placing a bet on rookie of the year, check out BettingData and shop around the best possible odds for the ROTY or any other NFL Future prop bets. Currently, Fanduel is offering the best sports betting odds between the big three wide receivers.

Now, let’s turn our attention to the top nine rookies for redraft leagues

If you were to say this selection is a bit of a stretch, I’d understand your reasoning, but hear me out.

I’ll start by saying that Palmer is a favorite prospect of mine who is severely underrated. He may not have produced in terms of stats at Tennessee, but his role in the offense was mostly comprised of running vertically with quarterbacks who, well, won’t be in the NFL.

Coming to the Chargers, Palmer has a pretty decent path to being the WR3, behind Mike Williams and Keenan Allen. Other wide receivers on the roster such as Jalen Guyton and Tyron Johnson aren’t exactly intimidating competition.

In 2020, Williams played in 15 games but started just 11 of them. He started his career with injury concerns and although he’s been relatively safe for the past two seasons, those concerns are still there.

Even if Williams is healthy, Palmer will still start on the outside, opposite Williams with Allen in the slot.

Remember, Palmer has a lot of practice stretching the field vertically and Chargers quarterback Justin Herbert can take advantage of that.

It’s more unlikely than likely of course, but Palmer gives me a feeling that he could produce a 2021 season similar to the Washington Football Team’s own Terry McLaurin’s 2019 rookie season.

Selected in the fourth round, new Jets running back Michael Carter has the easiest path to the field at the position outside of Pittsburgh Steelers running back Najee Harris.

Keep in mind that Carter and Harris are separated by three rounds, which makes it even wilder to comprehend.

The Jets running back room currently consists of Lamical Perine, Ty Johnson, and the recently signed Tevin Coleman. At first glance, Coleman may look like the one to rely on the most, but the team committed under $1 million to him.

Carter is a small back, listed at 5’8″, but Carter is arguably one of the best receiving backs in this entire class at this was his primary game at North Carolina behind now Denver Broncos Javonte Williams.

His skill set will not involve him getting 300 carries a year, but if you’re in a PPR league, Carter has an excellent opportunity to eat up targets behind or just over the line of scrimmage to also assist in the development of quarterback Zach Wilson.

When it comes to points at the end of the year, Lawrence will likely have more points than everyone on this list (except for the other quarterback on this list), but we need to keep in mind positional value.

Lawrence is a generation talent. While he will be playing from behind more than he’s used to, that does present fantasy production opportunities.

There will be some rushing production from Lawrence, but the majority will come from the passing game, which will sort of limit his value ceiling.

Right now, Lawrence is likely just outside the QB1 territory, at around QB15.

This was one of my favorite selections of the entire draft.

According to Over The Cap, if the Jets were to trade or cut fellow wide receiver Jamison Crowder, they would save over $10.3 million in cap space. Earlier this offseason, there were rumblings about Crowder potentially being on the move, and the addition of Moore represents that further.

If Crowder does end up out of the picture, the receiving group will consist of Moore, Corey Davis, and sophomore receiver Denzel Mims. Moore can also play on the outside despite his size, but with Davis and Mims, that will put Moore primarily out of the slot where he is going to exploit opposing defenses.

The Jets not only got two first-round picks in this draft but adding Moore was like adding a third.

Moore is equipped with a level of toughness that will serve him well in the NFL, especially playing the slot, and will be a frequent go-to target for Wilson.

If you’re in a PPR league, Moore could be an excellent value for you later in drafts. Draft him.

If Lance can mirror Herbert’s playtime from his rookie season, Lance will finish as the QB1 from these rookies in fantasy football.

This ranking, of course, hinges on the idea that Lance will play most of the season. If he only starts Week 17, this doesn’t count.

Now, if the raw but elite tools-possessing Lance gets the start from the majority of the season, expect him to be solid in the passing game, but the rushing floor is where we will make back our money. Fellow rookie quarterback Justin Fields is a speedster in his own right, but Lance is more electric and will be extremely difficult to deal with. Lance, as opposed to Lawrence, also has an incredible cast of playmakers at his disposal, including wide receivers Brandon Aiyuk and Deebo Samuel and of course, tight end George Kittle.

One of the better comparisons you can make for Lance is Buffalo Bills quarterback Josh Allen. The accuracy may not be there from the get-go, but the rushing floor will likely elevate Lance to a low-level QB1.

After a late-season DUI charge, there could be some looming disciplinary action taken on fellow Broncos running back Melvin Gordon.

In addition to that, the Broncos have just $4.5 million committed to him.

With Lindsay departing, it was safe to assume the Broncos may add a running back in the draft, but that was expected, later on, never mind trading up in the second round to get one.

Williams may not offer as much as the running backs that went before him in the draft in terms of the passing game, but Williams is an absolute animal running the ball and will be a tough task for any opposing defender to corral him.

If Gordon plays to start the year, this will definitely be more of a committee, but Williams should edge out more of the committee as time goes on. If the Broncos stick with Drew Lock at quarterback, expect the rushing attack to get more and more opportunities to help support an offense that is otherwise hindered by the mind-boggling play of the quarterback.

There have been rumors of the Falcons trading wide receiver Julio Jones this offseason. If this were to happen, Pitts could very well be a top-3 tight end in fantasy football. It will be absolutely absurd. Even with Jones on the roster, Pitts is not a normal tight end. He’s one of the greatest receiving threats to come out of the draft in an extremely long time.

It’s easy to look at Pitts as a tight end and look at the rookie tight end historical fantasy finishes and shy away, but you should almost treat Pitts as a receiver who will get the tight end identifier. Pitts will be able to line up all over the field in an offense that currently just has Mike Davis at running back, indicating that quarterback Matt Ryan may be throwing early and often this season.

On sheer volume alone, Pitts will be a perennial top-five tight end with potential for more if Jones finds himself elsewhere.

In his rookie campaign, Pitts could flirt with 100 targets and see some higher than expected touchdown totals.

For those of you that wanted to get ahold of some James Robinson share in 2021, well, those are likely on the steep decline after the selection of Etienne in the first round. What makes Etienne more appealing than anything is his combination of 150+ carries and what could be 80+ targets out of the backfield.

Coming from Ohio State, new head coach Urban Meyer utilized Curtis Samuel in a way that could also work for Etienne as he has the explosiveness and route-running savvy to blow by linebackers and take it to the house on any given play.

Etienne and Robinson will share the workload in two different ways, but Etienne’s Alvin Kamara-like skill set will propel him up the running back rankings, in the RB20-24 territory.

Based on his name alone, Etienne could be overdrafted, so it is important to stay vigilant of ADP’s. Currently, Etienne would make sense in the third/fourth round of fantasy drafts ahead of guys like San Francisco 49ers running back Raheem Mostert, Cleveland Browns running back Kareem Hunt, and potentially Chicago Bears running back David Montgomery.

If there is one thing we can count on from Steelers head coach Mike Tomlin it’s that this guy loved to have a featured back. We’ve seen it in years past with Le’Veon Bell, DeAngelo Williams, and for a hot minute James Conner.

Harris has the clearest path to a bunch of work, albeit behind a potential horrendous offensive line. Not only will Harris get a ton of work in the run game, but Harris is an elite pass-catching running back, too, which will allow for him to fit into that Bell mold and be the do-it-all kind of running back for the Steelers.

Keeping in mind that this offensive line may be a difficult one to run behind, Harris should still finish inside the top 13-15 running backs and potentially flirt with RB1 value. He is going to receive somewhere in the neighborhood of 270+ touches in his rookie season.

A journalism graduate from the University of New Hampshire, Richard has written about fantasy football for nearly a decade, having previously contributed to Bleacher Report. Outside of fantasy football, Richard is in a metal band, TrueShot, and has a 10-year-old son. A fan of the Baltimore Ravens, Richard does not think Joe Flacco is elite but believes Jay Ajayi is still a future Hall of Famer.