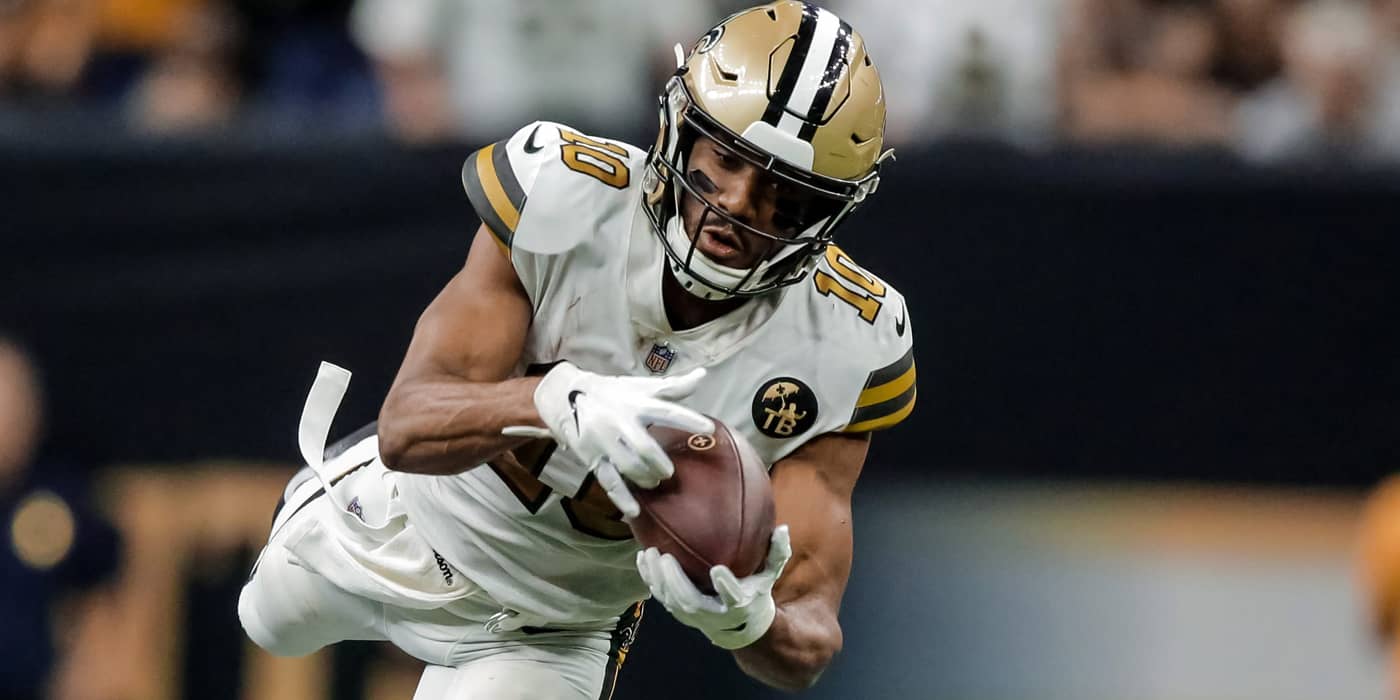 Best Ball has been around for a few years now but thanks to Underdog Fantasy, it has blown this past year leading to more and more people playing in this fantastic format. Sure you have to hit on your early guys, just as in every other format, but in best ball particularly, hitting on those high upside late-round targets is crucial to your success. In a format that favors a player’s ceiling over their floor, I will let you know who I have my eye on in the hopes of separating my teams from the rest.  I will begin with players who have an ADP over 120, which equates to round 11 in best ball formats and will cover in pairs all the way to Round 18. All Average Draft Position (ADP) will be based on Underdog’s current ADP. Let’s get started!

Trequan will serve as the Saints de facto number one receiver in Michael Thomas’s absence, so the fact that his price tag is sitting at WR60 is pretty wild. I expect Taysom Hill to win this starting job over Jameis Winston and he will need someone to throw to. The only other options Hill will have will be a combination of unproven players like Marquez Callaway, Adam Trautman and Deonte Harris. Well Brandon, what about Alvin Kamara? To put it simply, Hill does not check down like his Hall of Fame predecessor Drew Brees. In the four weeks Hill was the starter, Kamara averaged only 4 targets a game, which was only inflated by his 10 targets in Week 14. Kamara was averaging 8.9 targets with Drew Brees before he went down with an injury. I expect Smith and Trautman to be the biggest beneficiaries in Thomas’s absence and even when Thomas returns, Smith will benefit from the attention Thomas will draw. So sign me up for snagging a team’s WR1 at a WR60 price tag. Virtually no risk here taking him at this price.

This off-season, the Houston Texans added running backs, Phillip Lindsay and Mark Ingram. Add in the drama surrounding Deshaun Watson and you get the reason for Johnson’s ADP of 137.3. Last year, despite playing only 12 games, Johnson finished as the RB 21 in PPR leagues, quietly averaging his highest yards per carry of his entire career at 4.7 yards. The addition of Lindsay will take some carries away from him for sure, but I wouldn’t be too concerned about Mark Ingram. In fact, I wouldn’t be surprised to see Ingram as a surprise cut before the season even begins. With only Brandin Cooks as the only other proven option in the passing game, Johnson should be locked in for around 50 targets this year, especially if rookie Davis Mills gets involved at some point due to a Watson suspension or trade. We all know the Texans will be historically bad, but garbage time is a real thing and Johnson should get plenty of it. I have Johnson ranked inside my top 30 running backs, so the fact that he is currently the RB 43 in ADP, is music to my ears. It has allowed me to go with a zero or modified zero RB approach and snag Johnson as my RB4 in a ton of my drafts in the 11th and 12th rounds. Buy the dip.

The fantasy world went nuts when Smith signed with the Patriots this off-season, only to be culled by the signing of Hunter Henry hours later, leaving fantasy players everywhere in disarray. What do we do? Who do we take? How will they use them? We don’t know the answers to that yet, but we do know that Jonnu is a highly talented and physically gifted player at the Tight End position and you would be smart to bet on the talent. There have been videos in training camp of him lining up all over the place, in motion, in the backfield running designed runs etc… It seems Henry will fill your usual Tight End role, with Jonnu getting moved around and used in different positions. Mr.Kraft would not have ponied up this much money for his two tight ends if Bill didn’t plan on utilizing them. Henry currently has and ADP of 163.4 making him the TE 20, making him a nice value as well. But it’s Jonnu that I could see creeping into the Top 12 this year, not Henry.

With the help of rookie superstar Justin Jefferson, Cousins threw for 4,265 yards and 35 touchdowns in 2020, good enough for a QB11 finish. I currently have Cousins ranked as my QB 15, so his QB 19 price tag is already a value for me heading into my best ball drafts. Cousins isn’t going to give you many monster weeks, but it’s his floor that has me intrigued if you take a certain strategy at QB into mind. Cousins only had 5 games under 20 points in 2020, so pairing him with a high upside rookie like Trey Lance and Justin Fields, who may not start right away, could be a great strategy if you elect to wait at QB. Once Lance or Fields take over their starting jobs, they will bring the high ceiling upside due to their rushing ability, while Cousins will have your back with consistency if they have a few bad games here and there. Returning Thielen, Jefferson, Cook, and breakout candidate Irv Smith Jr., Cousins will again have the weapons to succeed and give you a safe and effective Top 15 Quarterback.

Tyrell Williams currently sits atop the Detroit Lions depth chart at receiver, which is the equivalent of me sitting atop the depth chart of the 10 and under midget football team, so not too impressive. But still, he should be second in line behind TJ Hockenson in targets for the Detroit Lions offense. The Lions are going to be bad this year and the downgrade from Matt Stafford to Jared Goff doesn’t help. The biggest question mark with Tyrell Williams is his health. He started 2019 blazing hot, going four straight games with a touchdown before going down with a plantar fasciitis issue, which lingered around for the rest of the year. Then in 2020, he missed all year due to a torn shoulder labrum. Now reportedly fully recovered, he steps into the Lion’s number one receiving role with prototypical size (6’4 205) and field-stretching speed. It will be up to Jared Goff to take advantage of that. If he does then you have yourself a steal in Williams, if he doesn’t and instead chooses to check down and not take any deep shots, then it’s not much of a loss as someone your drafting as your WR six or seven. Low risk/high reward.

James White is feeling like a forgotten man in New England these days. If you follow me at all, you will know I am all in on Damien Harris as a surprise RB2 this year. Although he is an adept pass catcher, I see James White retaining that role with a boost if Mac Jones takes over at any point this year. Sony Michel is not good and Bill Belichick is notorious for redshirting his rookie running backs, so Rhamondre Stevenson does not worry me one bit. White is going around the likes of Phillip Lindsay, Giovani Bernard, Xavier Jones, Tevin Coleman and Darrynton Evans in current Underdog drafts and should outperform all of them rather easily. I can see White getting back in the 60 catch range this year with around 500 receiving yards, giving you a nice return on value at his current ADP.

When I say I have 100% ownership of Jackson in best-ball leagues, I am not lying. The best ball king throughout his career due to his boom or bust stat lines, Jackson is a must-have for all my teams. Paired up with Matt Stafford’s arm, Jackson’s big-play ability will win you some weeks…if he is healthy enough to be on the field. Jackson still has game-breaking speed and elite downfield route running and I think being deployed as a situational deep threat instead of a near-every-down player will work wonders for him. He isn’t needed for every down thanks to Robert Woods and Cooper Kupp, so keeping him fresh to make those splash plays is just what you need out of your WR six or seven. Even if he misses a few games this year, which is a real possibility, you can do much worse with your round 17 or 18 pick.

Even before the Texans shipped Randall Cobb over to his best buddy Aaron Rodgers, I already had Collins highlighted as a last-round dart throw in all my leagues, not just best ball. Newly acquired Anthony Miller should compete for slot snaps with Keke Coutee, which doesn’t impact Collins at all. Collins is built for an outside role given his massive size at 6’4 220 and will likely be competing with Chris Conley, who he should beat out. Cooks is the clear alpha but beyond that Collins could very well finish second on the team in targets, with at least third a near lock. His size makes him a preferable red zone target for whoever is quarterbacking the Texans. They should be down in pretty much every game so volume will be Collins’s friend during garbage time. Brandin Cooks is already on tape praising Collins and all reports out of Houston are lining up with Cooks praise. I know we are talking about best ball here but side note, if he’s available in your dynasty league, scoop him up before it’s too late.

All off-season, we were waiting for Ertz to be moved, but it hasn’t happened yet. For now, he remains on the Eagles and will form a formidable tight-end duo with Dallas Goedert. Coming off three top-five seasons before last year, I believe Ertz still has plenty left in the tank to be useful, especially if he gets moved (which I think happens at some point this season). But even if it doesn’t, the Eagles should run plenty of two-tight end sets making Ertz a great bet to finish higher than his TE 26 price tag suggests. Not to mention, if Goedert goes down with an injury, you should have a locked and loaded Top 8 Tight End for as long as Goedert is out.