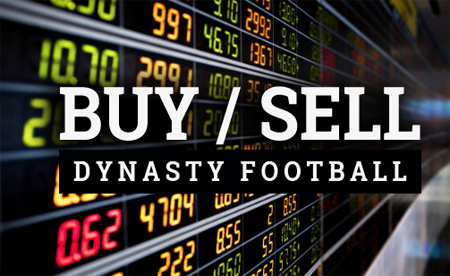 The offseason is full of wheeling and dealing and the time leading up to the NFL draft can stem some great trade offers. Fantasy football players will be looking to move draft picks and reorganize their rosters. Moving running backs, in particular, can help roster construction and allow dynasty players to invest in wide receivers, who tend to have a longer NFL shelf life and therefore produce fantasy value for longer.

The players I’ve listed here are less than obvious players who I believe are at peak value. It does not suggest these players won’t be successful in 2019, instead I break down why each player will lose trade value as the offseason progresses.

The Atlanta Falcons have committed a lot of money to Devonta Freeman; his $6.75 million cap hit is projected to be the 9th largest contract Arthur Blank has to pay out. The Falcons also invested a 2018 4th round draft pick in Ito Smith, who had a successful rookie year in black and red. Coleman’s rookie contract has expired, making him an unrestricted free agent-and with just $3.2 million in career earnings over 4 NFL seasons he will be looking to cash in.

There’s a lot of teams that need running back help, so Coleman likely will get a splashy deal (well, as splashy as running back deals get) that leads fantasy football players to chase the money and inflate his value. Coleman, though, failed to impress as the lead back with Devonta Freeman out in 2018. Coleman rushed for over 100 yards just twice in 16 games and ran for less than 60 yards in 13 of his games. He scored just 4 rushing touchdowns all season, and 28% of his total production came from two games; against Arizona and Washington.

Colman’s production dropped significantly when facing tougher competition. Below, I compare his production against New Orleans (twice), Dallas, and Baltimore to the rest of the Falcon’s opponents:

Coleman was unable to compete against tough competition in 2018 and was not able to perform like a lead running back, so there is no reason why we should be valuing him near the RB1 conversation.  Big contracts, however, get fantasy football owners excited and his value is sure to be boosted during free agency frenzy-capitalize on that and sell off this inconsistent running back.

Mixon is coming off an impressive sophomore season where he ran for 1,168 rushing yards (4th highest in NFL) and 8 touchdowns (11th best in the NFL). He also caught 43 passes (18th highest in the NFL) and pulled in a receiving touchdown. This production comes despite missing 3 games due to injury.

Why, then am I suggesting selling Mixon? The Bengals have a dismal roster construction that screams long-term rebuild. In 2018, they had the 28th worst offensive line in 2018, according to PFF. They can lose a lot of experience via free agency: Alex Redmond (928 total snaps in 2018), Trey Hopkins (589 snaps), Bobby Hart (994 snaps) and Andre Smith (452 snaps) are all unrestricted free agents. Cordy Glenn and Clint Boling combine for a total cap hit of $15 million, account for 7.5% of the total cap, and are 2 of the 8 most expensive contracts for the Bengals. Glenn can be cut for a $0 dead cap hit and Boling for $500,000.

The Bengals are quickly falling behind their AFC North rivals being led by Baker Mayfield and Lamar Jackson; it would shock me if new head coach, and former Rams quarterbacks coach, Zac Taylor doesn’t look for his quarterback of the future upon arrival. Dalton is the largest contract on the Cincinnati payroll ($16.2 million) and can be cut for no dead cap hit.

A bad offensive line, new unproven head coach, and new quarterback? This is eerily similar to the situation David Johnson was in. We thought he was situation proof, and that proved to not be true. Mixon’s value is high, and I’d get out from any shares before Zac Taylor takes a quarterback early in April; which would declare to the world that the Bengals are in rebuild mode.

This one may seem more obvious, but there is a belief that Drake will emerge gloriously from the chains of Adam Gase’s play calling and become the fantasy football darling that we have wanted him to be since Ajayi was traded to Philadelphia.

Drake won’t do that though, in large part because he is extremely touchdown dependent, as shown below:

Drake’s problems go beyond Gase: he failed to beat out 35-year-old Frank Gore (who will be returning in 2019) for a clear starting role, still has to fend off the athletic and quick sophomore back Kalen Ballage, and new defensive-minded head coach Brian Flores doesn’t inspire me. Drake was schemed out of games that Miami was playing behind and that likely won’t change with either a rookie or bridge quarterback taking over for Tannehill in 2019.

I get it, I’ve fallen for the Drake hype before too; he’s talented and there’s a lot to like. There’s much more, however, to be skeptical about. Find the Drake truther in your league and get this stressful asset off your roster.

Even in a run-heavy scheme, Carson owners should be concerned with Penny taking his carries. Carson played in 7 games with at least 19 carries last season and 7 games with less than 19. He was much more efficient with a higher workload:

Carson may hold onto his starting role, but Penny will get every chance to take over as the lead back for the Seahawks. In a smaller role Carson’s value will drop; making the offseason, especially before free agency or the draft potentially clusters the backfield more, the perfect time to sell of this 7th rounder.

White finished as an RB1 for the first time in his career in 2018. In 2017, White finished as RB38 and in 2016 he was RB26. He relied heavily on success in the passing game to secure his top finish: catching 87 of his 123 targets for 751 recording yards and 7 touchdowns. White also ran for 425 yards on 94 carries (4.5 yards/carry) for 5 touchdowns. White’s production, however, is very scheme dependent and Bellicheck has proven to be unpredictable. Through the first 9 games of 2018, White was significantly more involved in the Patriots offense: *White’s BYE week was Week 11, so this is a 7 game sample while White was struggling, rookie Sony Michel was excelling: rushing for 509 yards (72/game) and 2 touchdowns in Weeks 10-17. Michel’s momentum carried him into postseason favor with Bellichek, too: White won’t be eliminated from the New England offense; he’s a valuable pass-catching option. He’s losing value rapidly, though, as a fantasy football option. His inconsistency and Michel’s momentum makes White a prime sell candidate.ConclusionPlayers gain and lose value for a variety of reasons and I’ve tried to outline multiple ways of why in this article. Free agency, being replaced in the NFL draft, and potential roster reconstructions all can tank players values. These players should be considered prime options for moving, and offer varied levels of value. No player is too productive to move, and no player is too small to flip for good value. If you own one of these players: pop open that league browser and send some trade offers. It’s the offseason, have some fun and make some trades!

Matt is a seasoned fantasy football analyst that writes dynasty and devy fantasy football content year-round. In addition to writing for Gridiron Experts, he writes and hosts a podcast for The Dynasty Draft Room and publishes all of his work at patreon.com/theffeducator