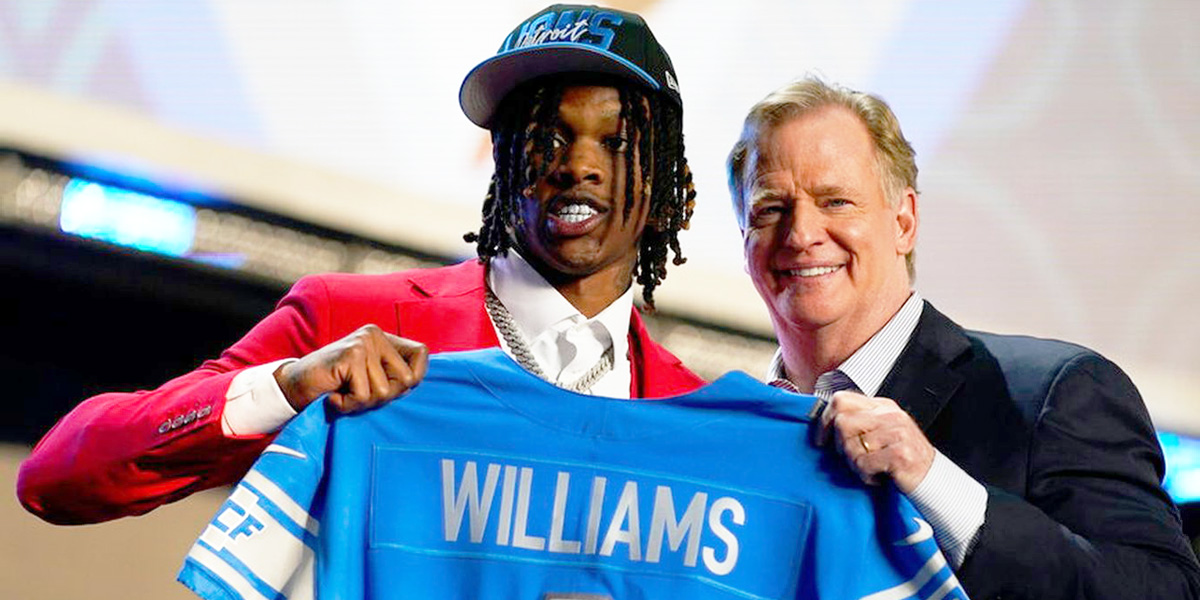 Depending on rookies to boost your fantasy football team is always a tricky proposition.  Regardless of the talent there is always the adjustment from college to the NFL.  In addition, no matter how talented where a rookie lands could determine how well he performs, is he a bust or a star the first year.

Here are five talented rookies that could bust this fantasy season.

The Lions’ moved up from 32nd pick in the first round to 12th to draft Williams.

Williams played one season at Alabama after transferring from Ohio State.  In his one season in Alabama, Williams racked up 79 receptions for 1572 yards and 15 touchdowns before tearing his ACL January 10 in the National Championship Game.  The torn ACL is presumably the reason Williams ‘dropped’ in the draft.

According to Brad Berreman, because of his injury “If he (Williams) is cleared to suit up to start the season, his snap counts will surely be somewhat limited early”.

If true that is a reason to pump the brakes on his redraft value.  But there is also his landing spot, or rather his quarterback, Jared Goff.

This is not an ideal matchup for Williams or your fantasy fortune.

In one of the more surprising moves of the 2022 NFL Draft, the Tennessee Titans traded wide receiver AJ Brown to the Philadelphia Eagles.  The Titans then drafted Burks with the overall 18th pick of the draft.

In his collegiate career at Arkansas, Burks had 15-plus yard receptions on 27% of his targets, second in the 2022 Draft Class to Williams’ 29%.  In his senior year ye had 66 receptions, 1104 yards and 11 touchdowns.  He finished fifth in yards after catch per reception (9.3) last season.

All good stats that give reason to be optimistic about his chances to ball out.

Except Dwain McFarland @dwainmcfarland, isolated Burks’ performance in college with the routes most often used in the NFL.  Burks ranked 16th of the 27 receivers sampled.  In Arkansas’ simplistic scheme, Burks ran 20% of his routes behind the line of scrimmage.

There is also his landing spot that should cause pessimism.  Tennessee isn’t a pass-heavy team.  Last season (with Brown and Julio Jones) they ranked 31st in passing plays per game (31.1).

Now their passing offense has rookie Burks and newly acquired Robert Woods who is coming off an ACL injury.

Browns’ departure leaves 105 targets and a 27% target share, theoretically up for grabs. Brown was by far Tannehill’s favorite target.  He threw 19.9% or one out of five of his passes to Brown.

Who gets the abandoned targets?

Burks can line up in the slot, as the ‘X’ or in the backfield (hence the way to early Deebo Samuel comparisons).  Ourlads.com is predicting Burks to be the starting receiver in the slot.  (si.com projects fifth round pick Kyle Philips to become the Titans’ slot receiver).

Burk’s ceiling is dependent of both quarterback Tannehill, the status of Woods, and Tennessee’s second best receiver last season Nick Westbrook-Iknine.  Woods has never had more than a 22% target share, and the status of his ACL is uncertain.  Westbrook-Iknine had 56 targets with an 11.2% target share last season.  The familiarity with offensive coordinator Todd Downing’s scheme and Tannehill makes him the obvious choice to grab a huge percentage of Brown’s targets.

If Downing can become creative in his schemes, Burks has a chance.  But depending on a run first offense that attempted only 31.1 (26th) passes per game is asking a lot of Burks and your redraft fantasy team.

Um… okay, Leonard Fournette last season had a 64.7% snap share, 14% target share, 84 targets (third in NFL among running backs) and a 79.3% catch rate with one drop.  In the second half of last season, Fournette did not have a game with less than a 12.5% target share.

Unfortunately, one of White’s current weaknesses according to NFL.com draft analyst Lance Zierlein is that he is “too inconsistent to be trusted with protection duties”.  That doesn’t bode well in a Tom Brady offense.

Look for White to make his time on the field with the special teams.  Not exactly helping your fantasy team.

Who amongst us does not believe that Corral will unseat Sam Darnold?

There is no doubt head coach Matt Rhule is in a win-now season.  New offensive coordinator Ben McAdoo knows what he already has in Darnold, having scouted him before the 2018 NFL Draft.

The Panthers traded their fourth-round pick of 2022 Draft and their third-round pick of the 2023 Draft to the New England Patriots to draft Corral.

Corral finished his four years at Ole Miss with a 67.3% completion percentage.  Last season he played in 13 games.  He had 20 touchdowns and five interceptions with a 67.9% completion rate.  He ran for 614 yards and had 11 rushing touchdowns.  He suffered a high ankle sprain playing in the Outback Bowl.

Corral’s greatest strength plays to what may be Carolina’s biggest weakness.  He has the quickest release of this year’s draft class.  Which will be beneficial playing behind PFF’s 31stranked offensive line.

Corral may not be “The One” but the chance he unseats Darnold is a fair bet.  That doesn’t guarantee success.  He will still be playing behind PFF’s 31st ranked offensive line.  First round offensive tackle was drafted, Ickey Ekwonu.  Ekwonu is an outstanding run blocker especially in the outside zone.  Unfortunately, currently he is just an average pass protector.

His receiving options are limited to DJ Moore, Robbie Anderson, Rashard Higgins, Ian Thomas, and Tommy Tremble.  Moore is the best and then…

Corral brings skills that will get him the starting quarterback job in Carolina this year.  It remains to be seen if his skills can overcome the high hurdles laid out for him or anyone under center in Carolina.

DraftKings Sportsbook Odds to Have the Regular Season Most Passing Yards

For those of you who play in fantasy football IDP leagues, buyer beware.

First the Texans’ defensive coordinator from last year when the secondary ranked 27th in points allowed and 31st in yards allowed in now the head coach.

Second in 2020 and 2021 seasons, Stingley only played in 10 games.  Part of the reason was the Covid reduced season.  The other reason was the Lisfranc injury Stingley suffered in 2021, he had surgery for it last September.

There is no doubt that Stingley is talented.  In his freshman year (2019) he had six interceptions and 21 passes defended, helping LSU win the National Championship and himself earning second-team All-American honors.

The Covid hit and injuries followed, and he finished the next two years with zero interceptions.

According to Lovie Smith’s draft day call to Stingley, Stingley will cover the opposing team’s number one receiver as the Texans top cornerback.

Stingley straddles that line between potential and actualization.  Which one will show in his first year in Houston?  Not sure enough for redraft IDP gamble.

While most of these men are excellent choices for your dynasty leagues, remember this is redraft.  You are counting on excellence for one season and in their case their first season in a new system with (for some) new regime and for other a desperate regime.