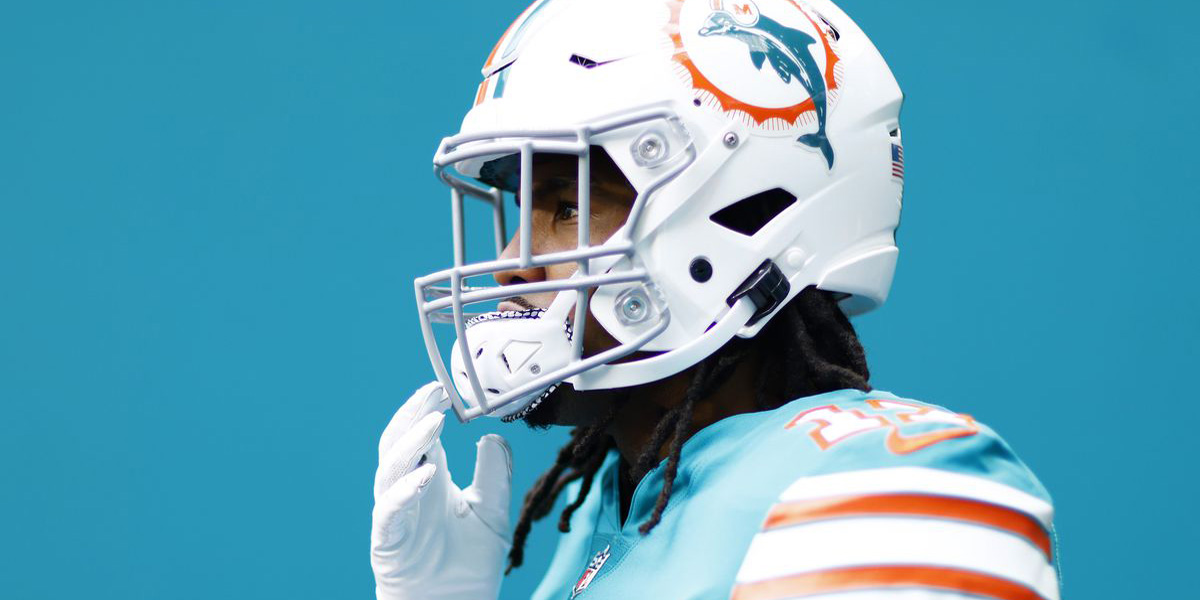 There is nothing more exhilarating than identifying a WR that has breakout potential and then goes on to have a league-winning season. However, we don’t talk enough about the equally impactful move of drafting a player who busts. I have identified five WRs who are being drafted in the first five rounds who are bad picks at ADP and thus should be avoided.

A lot of fantasy analysts have been making the bull case for Adams this season, such as the “shower narrative” with former college QB Derek Carr as well as him coming off of back-to-back 340+ PPR seasons. I’m here to make the bear case. Adams has an uphill climb if he wants to be a worthwhile pick at his current ADP of 10. First, he turns 30 this season. While this is probably the weakest argument for him busting in 2022, it should at least be acknowledged that Adams is no spring chicken.

Second, he has a downgrade at QB. I wrote in a previous article about Adams’ impact on the Raiders, saying, “Derek Carr is no slouch of a QB, but he trails Aaron Rodgers significantly in efficiency. Carr has a career TD rate of 4.3%, while Rodgers’ is 6.3%. Carr’s career Y/A is 7.1, and Rodgers’ is 7.8. So even if Adams was able to maintain his absurd 31.6% target share, he likely would lose yards and touchdowns due to the QB downgrade.”

I also mentioned that Adams has far more competition for targets in Las Vegas. These two pieces are the meat of my bear argument for Adams. In order for him to be a good pick at his current opportunity cost, he would need to maintain both his efficiency and the volume that he had in Green Bay. The problem is that I don’t see either of these happening because of the QB downgrade and the increased target competition. That’s why I’m avoiding Adams this year in redraft.

I cannot write this article without bringing up Hill. A few weeks ago, I posted a tweet about Hill that was met with more attention than I’ve ever received on Twitter.

I still don’t understand how Tyreek Hill is being ranked as a WR1.

It was met with both agreement and disagreement but what hit home is that I needed to actually provide context for why I said this. This brings me to why I included him in this article.

My reasoning for being down on Hill is almost identical to why I’m down on Adams. At 28, age isn’t necessarily a concern, but it’s something worth noting. Hill is also receiving a downgrade at QB. In fact, I’d argue his downgrade is even more significant than Adams’. Hill is going from arguably the best QB in the NFL (Patrick Mahomes) to Tua Tagovailoa, who we are not sure will even be the starter next year. Here are some numbers that illustrate the downgrade. Over his career, Mahomes has averaged 8.1 Y/A and a 6.4% TD rate. Tua, on the other hand, has averages of 6.6 Y/A and a 4% TD rate. I understand that Tua is young and potentially has not reached his ceiling, but how big of a jump are you expecting him to take? Hill then, is almost certainly going to lose efficiency and thus will need more volume to make up for this, bringing me to my next argument against Hill.

This is where his situation is slightly different than Adams’. While I have volume concerns for both players, it is for different reasons. As I mentioned earlier, Adams concerns me because he will be facing stiffer competition for targets. On the other hand, Hill will have less competition for targets, although there will be fewer of them to go around. Patrick Mahomes has averaged 37.2 attempts per game in his career. To use even the most flattering data available, in Tua’s 11 full starts in 2021 he only averaged 33.7 attempts per game. I’m trying to be as kind as possible to Tua with that number and it still leaves more than 3 targets per game that are lost. Over a full season that is 60 targets less.

Of course, it is possible Hill could pay off at his ADP of 22 but it feels like too much has to go right in order to achieve that outcome. I’m looking to draft other players where Hill is currently being drafted.

At this point, it might seem like I’m just a Dolphins hater but I promise I have numbers and rationale to back up why I’m avoiding Waddle as well. Unlike Hill, Waddle isn’t an established superstar who will be first in the pecking order.

Let’s think about this. Waddle finished as the WR13 last season and is being drafted as the WR15 in 2022. That seems like an okay value until you consider the addition of Hill. Waddle was targeted a whopping 140 times last season mostly due to the fact that the Dolphins had no one else to throw to. This isn’t to say that Waddle isn’t talented because he is. But he was also competing for targets with basically just Mike Gesicki. The next highest pass-catcher targeted was Devante Parker at just 73 targets.

Let’s assume I’m wrong on Hill and he gets the 140 targets that Waddle has last year. Where is Waddle getting his targets from? Let’s also assume he gets all of Parker’s, 25% of Gaskins’ (the rest going to Edmonds), and maybe another 20 from other receivers that aren’t on the team anymore. That’s still just 109 targets. Let’s again assume he keeps the same efficiency as last year. That would net him 187.6 PPR points. That would have ranked as the WR29 last season.

My whole point in this exercise is to show that there just aren’t enough targets to go around unless Tua significantly increases his passing volume. I fully acknowledge that one of the two Miami WRs might get enough targets to justify their price tag, but which one?

There’s too much projection and speculation in this offense for me to feel good about drafting either one of Hill or Waddle at ADP. That’s why I’m staying away and why you should too.

This one physically pains me to write. If there was even a Diontae Johnson stan over the last two years, it was me. However, this is what you have to do if you want to be consistently competitive in redraft fantasy football. Every year is a blank slate where we need to evaluate players all over again. Diontae Johnson was an awesome pick the last two years when he was going after the 5th round and  Ben Roethlisberger was throwing the ball 600+ times. This isn’t the case anymore though. Johnson’s ADP currently sits at 41st overall and he will be catching passes from Mitchell Trubisky and/or Kenny Pickett.

Trubisky has been an ok QB throughout his career but has averaged just 30.9 attempts per game. It’s always hard to project volume for rookies but there is no way that Pickett would throw much more than Trubisky, especially considering his ability to use his legs. I expect them to throw it more than 31 times a game, but I don’t see how it comes close to Big Ben’s average of 39.1 attempts per game over the last two seasons.

The biggest argument I’ve heard for Diontae Johnson is that he was extremely inefficient the past two years because Roethlisberger was also inefficient. While this may be true, I don’t see how a slight uptick in efficiency can cancel out the expected lost volume. It pains me to say this, but I’m out on him in 2022.

It came as a surprise to me that I would have to include Metcalf in this article. I figured that market would be overreacting to the Russell Wilson news and Metcalf could have even been a value pick. This is not the case.

Metcalf is coming off the board as the WR13 despite the Wilson departure. This is surprising when you consider that he finished as the WR14 last year, albeit with Russ missing a few games. He now will play zero games with Russ and seventeen games with some combination of Drew Lock and Geno Smith.

Pete Carroll’s Seahawks have been trying to establish the run for a decade now and without a star QB demanding more pass attempts, you have to imagine Seattle will want to establish it more than ever. This means fewer target opportunities for Metcalf.

This doesn’t even begin to account for the expected loss in efficiency. While Russ may have never gotten the green light to throw it 35+ times a game, he was at least extremely efficient with what opportunities he was given. Wilson has averaged 7.8 Y/A and a 6.2% TD rate over his career. Lock’s career numbers are 6.7 and 3.5%, while Geno’s are 6.9 and 3.4%, respectively. Regardless of which QB ends up receiving more snaps for the Seahawks, Metcalf is destined for decreased efficiency in 2022. That, combined with Seattle aiming to run the ball more this season, is why I’m avoiding DK Metcalf this year.