The Kansas City Chiefs look to return key injured players, Matt Cassel (QB), Jamaal Charles (RB) and Eric Berry (S). Also look for Tony Moeaki (TE) to return after flashing potential with Cassel but missing last year with an ACL injury. Key additions for the Chiefs include tackle Eric Winston and running back Peyton Hillis both of which should help the run game and first round draft pick DT Dontari Poe. 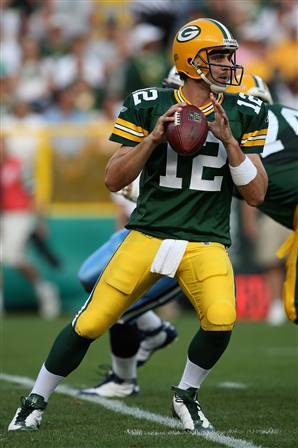 Look for Aaron Rodgers and the Packers to try to bounce back from an embarrassing 37-20 loss to the Giants in the second round of the playoffs last season. On offense the Packers look to see more of the Rodgers from the regular season of 2011, the guy who was 1st in the NFL in QB rating (122.5), 2nd in touchdowns (45), and 2nd in completion % (68.3). Look for Greg Jennings to re-emerge as the number one threat among these receivers, with Nelson drawing more double coverage on the deep threats this year. The Packers will test the NFL’s 16th best passing defense in the 49ers secondary. The 49ers gave up 230.9 yards through the air last year and the Packers are among the best passing teams in the NFL, expect big numbers for Rodgers.

The 49ers will not allow Cedric Benson or the other Green Bay running backs to get started in this game. Benson carried against the 49ers last year 17 times for 64 yards, I’d expect a similar result in this meeting. The 49ers have added to their offensive arsenal through free agency acquisitions, Mario Manningham (WR, former NYG), Brandon Jacobs (RB, former NYG) and Randy Moss, (WR, did not play last year) and through the draft with first round pick WR A.J. Jenkins and second round pick RB LaMichael James. Expect Alex Smith to progress similarly this year, if not exceed expectations by utilizing his surrounding cast more. Will the Packers new pass rush featuring, draft picks Nick Perry, DE, Jerel Worthy, DT and 4-year standout, Clay Matthews, be able to pressure Smith into making mistakes or will Smith progress as a quarterback?

The Steelers will look to take on the formidable Denver defense (ranked 18th against the pass- 231.5 yds. /game and ranked 22nd against the rush- 126.3 yds. /game) with recent contract dispute returnee WR Mike Wallace and standout WR Antonio Brown. Big Ben Roethlisberger, QB, looks to have a better year with new offensive coordinator Todd Haley but the state of the offensive line may lead to more problems for Big Ben. 1st round pick guard David DeCastro is out for months after dislocating his kneecap, tearing his MCL and damaging his patella tendon. Leaving the offensive line in flux, with either rookie T Mike Adams or second year T Marcus Gilbert protecting Big Ben’s blind side from the potent attack of RDE Elvis Dumervil and LB Von Miller. The prospects are looking somewhat bleak. While the offensive has potent attacking power, will the Steelers’ offensive line be able to protect Big Ben from another injury-riddled season?

The Denver Broncos won the Peyton Manning sweepstakes this offseason. Manning replaces Tim Tebow as the starting quarterback. This will be Manning’s first legitimate test against the staunch Steelers defense. The Steelers defense was first against the pass at 171.9 yds. /game and 8th against the rush at 99.8 yds. /game. Watch for LB LaMarr Woodley and S Troy Polamalu to make an impact against the Denver offense. In terms of the ground attack, the Broncos have Willis McGahee to lead an attack. McGahee looks to be more of a punch it into the end zone kind of back instead of one who you could expect a lot of long runs from. McGahee may find some room to run but will need to rely on Manning to open up some room with the pass. Manning has talented receivers in Eric Decker, Demaryius Thomas and Brandon Stokley, but will they be enough to aid Manning in his return to the NFL? The playoff hopes of Denver’s talented team lie squarely on Manning’s shoulders, can he recover and prove that he still has some game left in him?

Last season, the AFC West was muddled with insignificance with no team truly stepping up and distinguishing itself from the pack. This year all of those teams look to be better. The Kansas City Chiefs look to return key injured players, Matt Cassel (QB), Jamaal Charles (RB) and Eric Berry (S). Also look for Tony Moeaki (TE) to return after flashing potential with Cassel but missing last year with an ACL injury. Key additions for the Chiefs include tackle Eric Winston and running back Peyton Hillis both of which should help the run game and first round draft pick DT Dontari Poe. The Chiefs have a high flight offense when healthy and after posting the sixth best pass defense in the NFL last year allowing 201.3 yards/ game, the Chiefs look to improve this year. Look for the Chiefs to test the 20th best pass defense (236.6 yds./game) and the 6th best rush defense (97 yds./game) last year of the Falcons. Specifically keep an eye on the match up between Chiefs WR Dwayne Bowe and Falcons’ CB Brent Grimes. Also, watch to see if Falcons’ DE Ray Edwards can rebound from a down year. The Chiefs can be dominant, can they rekindle their success from 2010 with a revitalized team or will they fail to recreate their past triumphs?

The Atlanta Falcons were embarrassed in their loss to the New York Giants in the first round of the playoffs last year, 24-2. If this team is going to get going offensively it falls on the shoulders of fifth year man, QB Matt Ryan to lead them. Ryan has star wide receiver Roddy White and budding star Julio Jones who looks to make a bigger impact this year. With the pass attack firing on all cylinders against the Chiefs’ 6th best in the NFL pass defense, expect a lot of runs by Falcons’ running back Michael Turner against the Chiefs’ 26th best rush defense. It will be interesting to see if Chiefs DT Dontari Poe can slow down the veteran Turner’s rushing attack. Can the Falcons’ Matt Ryan step up and coordinate flight for the dirty birds or will they meet the tip of the arrowheads?