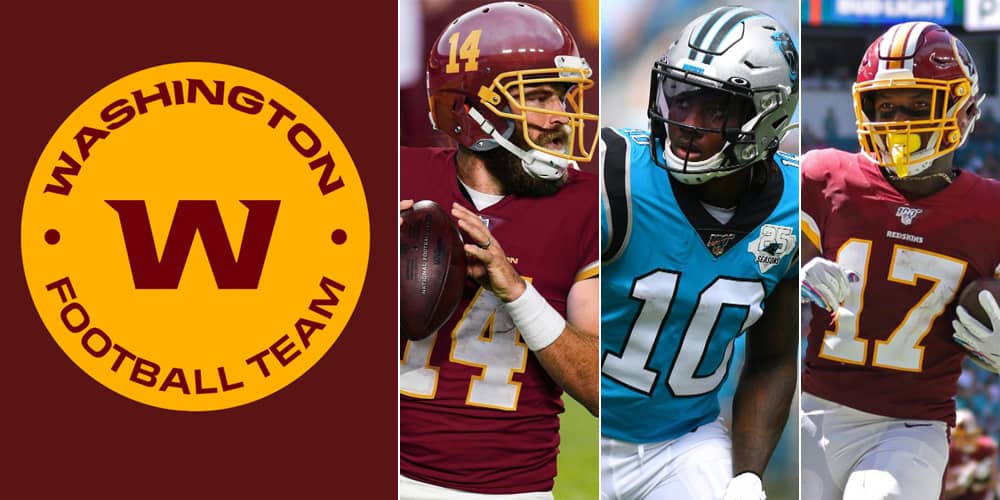 The Washington Football Team had a semi-successful season in 2020; they made it to the playoffs. However, it was on the back of their defense. Their passing game ranked 24th last season (up from 32nd the year prior).  Their wideouts averaged 1.24 yards per route run and caught eight touchdown passes, the league’s worst and second-worst rates.  And the receivers had only 63 receptions of 16 yards or more, the league’s third-lowest total.

Is that all about to end?

The WFT has been busy in free agency.  They have added quarterback Ryan Fitzpatrick, wide receiver Curtis Samuel, and wide receiver Adam Humphries.  This is an addition to what they already had: Terry McLaurin, Steve Sims, Antonio Gandy-Golden, and Logan Thomas.

In addition to their free agency additions, the WFT has the 19th pick in the 2021 NFL Draft.

Is the passing game improved?

Fitzpatrick is entering his 17th NFL season and is an improvement over what the team had last year and currently has this year.  Fitzpatrick should have no problem beating out both Taylor Heinicke and Kyle Allen for a start.

Last season Fitzpatrick started seven games and played in nine for the Miami Dolphins.  He attempted 267 passes, completing 183 for 2091 passing yards.  He had 13 touchdowns and eight interceptions.  Fitzpatrick also had 30 rushing attempts for 151 yards and two touchdowns.

Per playerprofile.com, in his 267 attempts, he had 34 red zone attempts, 23 deep attempts with a 50% red zone efficiency, 56.5% deep ball completion percentage,  Fitzpatrick was 60.% effective when pressured, and 71% when throwing from a clean pocket.

Dwayne Haskins: In the 241 passes he attempted, 148 were completions.  Of those, 23 were red zone attempts, and 24 were deep attempts.  He had a 42.6% completion rate when pressured and completed 66.8% of his passes out of a clean pocket.

Kyle Allen: In his 87 passing attempts, he completed 60; of those, nine were red zone attempts, and five were deep attempts.  He had a 47.8% completion rate when pressured and completed 76.6% of his passes out of a clean pocket.

Alex Smith: In his 252 passing attempts, Smith completed 168. Of those, 31 were red zone attempts, and 25 were deep pass attempts.  Smith had a 27.5% completion rate when pressured and completed 74.1% of his passes out of a clean pocket.

Fitzpatrick is an upgrade.  Last season, he rebuilt Miami Dolphins from a 5-11 record to a 10-6 record.  He started seven games, completed 68.5% of his passes, recording a 76.9QBR while tossing in 13 touchdowns and eight interceptions.

Under Norv and Scott Turner in 2019, Samuel played mostly outside, lining up as a wide receiver in two-thirds of his snaps.  In 2020 under Joe Brady, he was used primarily as a slot receiver, with only 27% of his snaps coming from the outside.  He also had 70 snaps from the backfield in 2020.  Last season playing mostly out of the slot, Samuel set career highs in receptions (77) and receiving yards (851).

Humphries is primarily a slot receiver.  Although limited to 19 games in the last two seasons due to concussions and ankle injuries, he played 74.5% of his snaps out of the slot in his seven games in 2020.  In the seven games he played last season, he had 23 receptions for 228 yards and two touchdowns.

Last season McLauring was the WFT’s receiving offense.  He was on the field for 949 offensive snaps and was targeted 134 times.  Of the 63 receptions for “explosive plays” accumulated by the WFT, McLaurin was responsible for about 40% (25) of them; no other receiver was even close.

2020 was a breakout year for Sims.  He was targeted 48 times, 11 deep targets, three red-zone targets, and 542 yards and one touchdown.  According to ProFootballFocus.com, he played 21.5% of his snaps out of the slot.

Tight-end Thomas was an important part of the team’s weak receiving corps.  Thomas was on the field for 97.8% of the offensive snaps with 110 targets, 11 of those were deep targets, and 17 were red-zone targets.  He played out of the slot at a 48.4% rate and finished the season with 72 receptions, 670 receiving yards, and six touchdowns.

Whether due to hamstring injury or healthy scratch, rookie Gandy-Golden finished his rookie season poorly.  He was on the field for 124 snaps, half of which were in Week 16 when McLaurin was out with an ankle injury.  He was targeted seven times in six games.  He finished with one reception for three yards.

There is no doubt that WFT’s receiving potential has been elevated.  The trick will be to keep Humphries healthy and on the field.  To eliminate drops, Logan had six, Sims three, and McLaurin two last season.  And finding the actual potential Gandy-Golden brings will just be an extra bonus.

With Turner’s propensity to play Samuel on the outside and the addition of Humphries, it isn’t hard to imagine utilizing McLaurin, Samuel, and Sims on the outside while Humphries man’s the slot.  When Humphries and Fitzpatrick played together in Tampa for the 2017-2018 seasons, Humphries had 188 targets, 137 receptions for 1447 receiving yards collectively.

And while the team had the third-lowest total in “explosive plays,” Samuel had five explosive rushes in 2020 for first among all receivers and 28 total explosive plays that ranked him seventh, one spot below Kansas City’s Tyreek Hill.

Even though Fitzpatrick has the propensity to be either Fitzmagic or Fitztragic on any given play’; it is okay because the receiving and passing corps for the WFT has been upgraded for one year, and we haven’t even got to the draft.