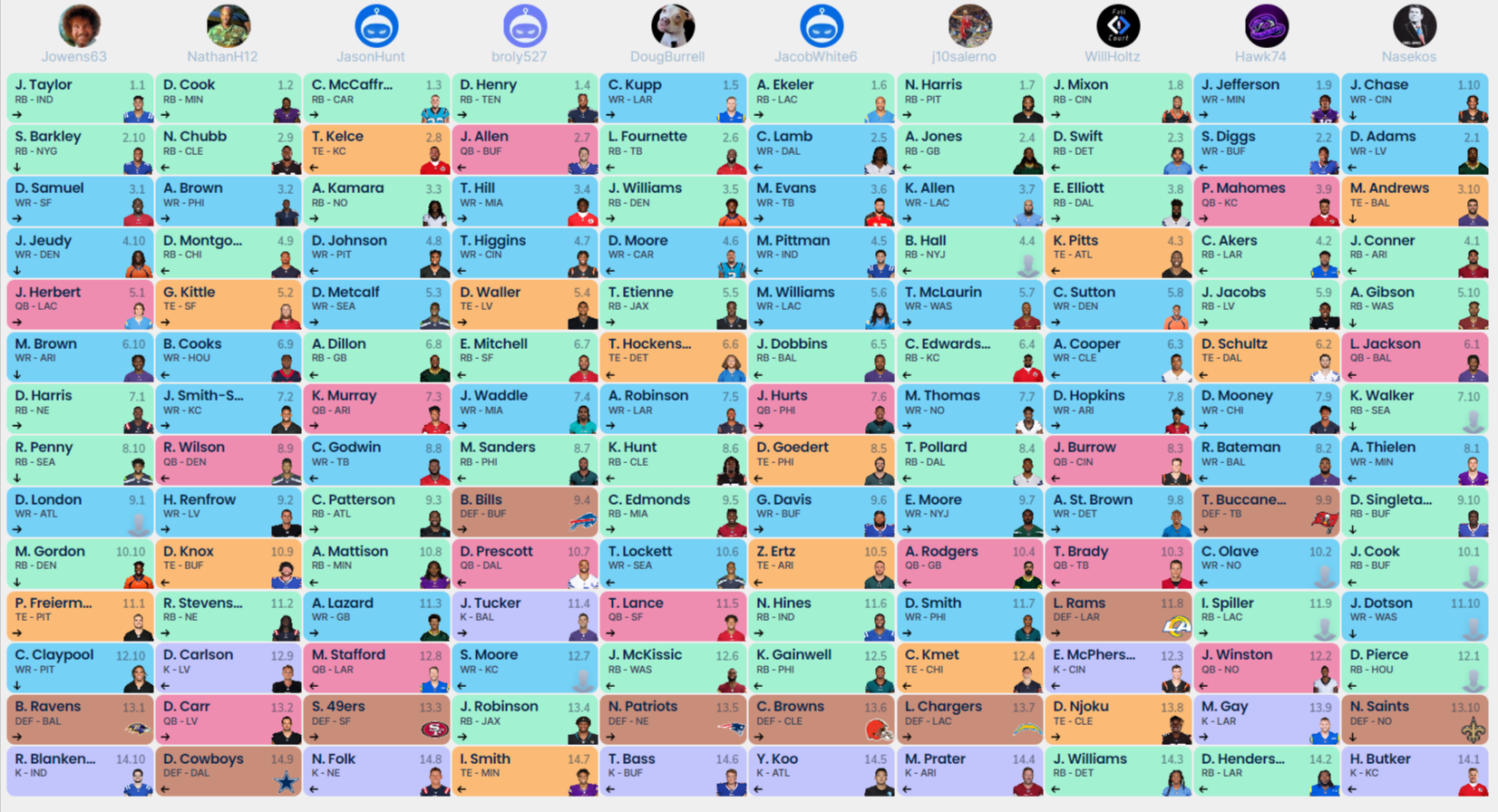 The writers at Gridiron Experts recently held a 10-team PPR mock draft and invited some friends to participate. The 14-round draft included 9 starters (1 QB, 2 RB, 2 WR, 1 TE, 1 Flex, 1 D, 1 K) and five bench spots. In this article, we’ll go round by round and identify the best values and get some thoughts from our experts on their picks. You can see the full draft board here.

The participants in order of the draft:

There are no big surprises in the draft’s first three rounds except for Dalvin Cook going off the board with the second pick. Will Holtz was the only person who started the draft with three running backs. Lawrence Iacona went with the Zero RB strategy. “There were plenty of running backs on the board that I could draft later on, so I chose Diggs, who is a top 5 receiver, with the second pick, and Mahomes next because my process is to draft one of the top 3 QBs, if given the opportunity.”

Lawrence- “Picking Jefferson at 1.9 was an absolute steal. He has the potential to be the number one receiver in fantasy football this year.”

Jacob– “I almost drafted Jefferson with the 1.6 pick, but with a lot of WRs available in rounds 2-4, taking a locked-in top 6 RB like Ekeler was an easy choice. CeeDee Lamb is ready to go full nuclear, and adding Mike Evans in the third round is a dream start.”

Doug– “I’m not buying into the naysayers who are worried about ‘Fat Lenny’. He’s an every down back in a high-scoring offense and finished with the third most receptions among RBs last season.”

Every team has at least two wide receivers and two running backs after six rounds. Jacob White drafted four receivers in a row. Interestingly, seven tight ends have already been drafted. Doug reached a round on T.J. Hockenson but said, “My strategy is to draft a tight end with Top 5 potential, and he was the last player in my tier with that upside.”

Lawrence– “I went with the Zero RB approach in this mock draft, and I believe it worked. Drafting Cam Akers with the 4.2 pick was a dream and after watching Josh Jacobs perform in the Hall of Fame game, I knew I couldn’t have drafted a better RB in the 5th round.”

Jacob– At this point, I was in the midst of the RB Dead Zone, so I decided to keep hammering WR and took another one of my top 12 receivers in Michael Pittman and added my highest ranked player left on the board, Mike Williams, for additional bench depth.”

Doug– “If reports that Jacksonville envisions Travis Etienne in an “Alvin Kamara-type” role, then he carries a lot of upside for a fifth-round pick.”

We start to see a lot of value in the middle round, especially at WR. Jaylen Waddle in the 7th round is the steal of the draft so far. Gabe Davis also went two rounds later than ADP to Jacob White. “I couldn’t pass him up here. Davis is as efficient as they come and if he can finally earn a good amount of volume, he’ll be a league winner in 2022.”

These are also the rounds where the second tier of QBs, ones that could potentially finish as the QB1, are usually taken. However, only six have been taken so far, so there is still a lot of value to be had in the later rounds.

Lawrence– “My mindset is to draft a top 5 defense, so I selected the Bucs defense after the Bills were selected earlier in Round 9.”

Jacob– “Jalen Hurts is the last QB I feel comfortable going ‘naked with’ and is the QB6 in my rankings, with overall QB1 upside, so this was an easy pick. Dallas Goedert is the first TE in my second tier, and with Hurts already on my team, this was an auto pick.”

Doug– “Kareem Hunt is a great target in the 8th round of a 10-team draft. He not only offers standalone value in a PPR league, but he’s only an injury or trade away from becoming an RB1. I view Chase Edmonds as a great value in the 9th round for someone who should lead the Dolphins backfield in receptions this year.”

Waiting on QB offers lots of value with potential Top 10 players like Dak Prescott, Tom Brady, Aaron Rodgers, and Trey Lance, all available in round 10 or later. We also see a lot of high-upside RBs that could be difference-makers for the teams that drafted them. Quarterbacks and running backs made up half the players drafted in rounds 10-12 and illustrate how sharp drafters use those rounds to draft potential studs as a steep discount.

Lawrence– “Chris Olave is my pick to win rookie of the year this season. Olave has the size, strength, speed, and agility to produce WR1 numbers.”

Jacob– “In hindsight, I should’ve reached and taken Rhamondre Stevenson in the 10th round, but I’m okay with Nyheim Hines as my RB3, given that the Colts gave him a second contract a year ago and training camp reports suggest he could see increased playing time through a number of creative formations. I hate to leave drafts without Kenneth Gainwell. He is my highest rostered player on Underdog. I don’t think it would be crazy if he ends up out-snapping Mile Sanders and Boston Scott by the end of the season.”

Doug– “Trey Lance has been my favorite QB target in drafts. He’s one of the few QBs available in the late rounds that has league-winning upside. I added some nice bench depth at WR with Tyler Lockett, who I believe has a great chance to outperform his ADP. You can read my draft profile on Lockett here.

Lawrence– I thought I drafted relatively well. Two top 5 receivers and two running backs who have league-winning upside this season. Top 3 quarterback in Mahomes. Top 3 defense in the Bucs defense. Solid handcuff in Henderson. I’m comfortable with Olave in the flex and has shown that he is worth the pick the Saints spent to get him.

Jacob– I’m starting like the “Hero RB” build more and more. I would’ve liked this team a lot more had I been able to draft Etienne in the 5th, but I’m overall extremely satisfied with how this draft turned out.

Doug– I really like my wide receiver group. I’m not concerned with having two Rams, Kupp and Robinson, in my starting lineup, as history has shown multiple times a good offense can support two top 24 wide receivers. At running back, I look for pass catchers in a PPR league and my team is full of them. I especially like two of my later-round picks, Chase Edmonds and J.D. McKissic, who provide a safe floor in the event of injuries or bye weeks.