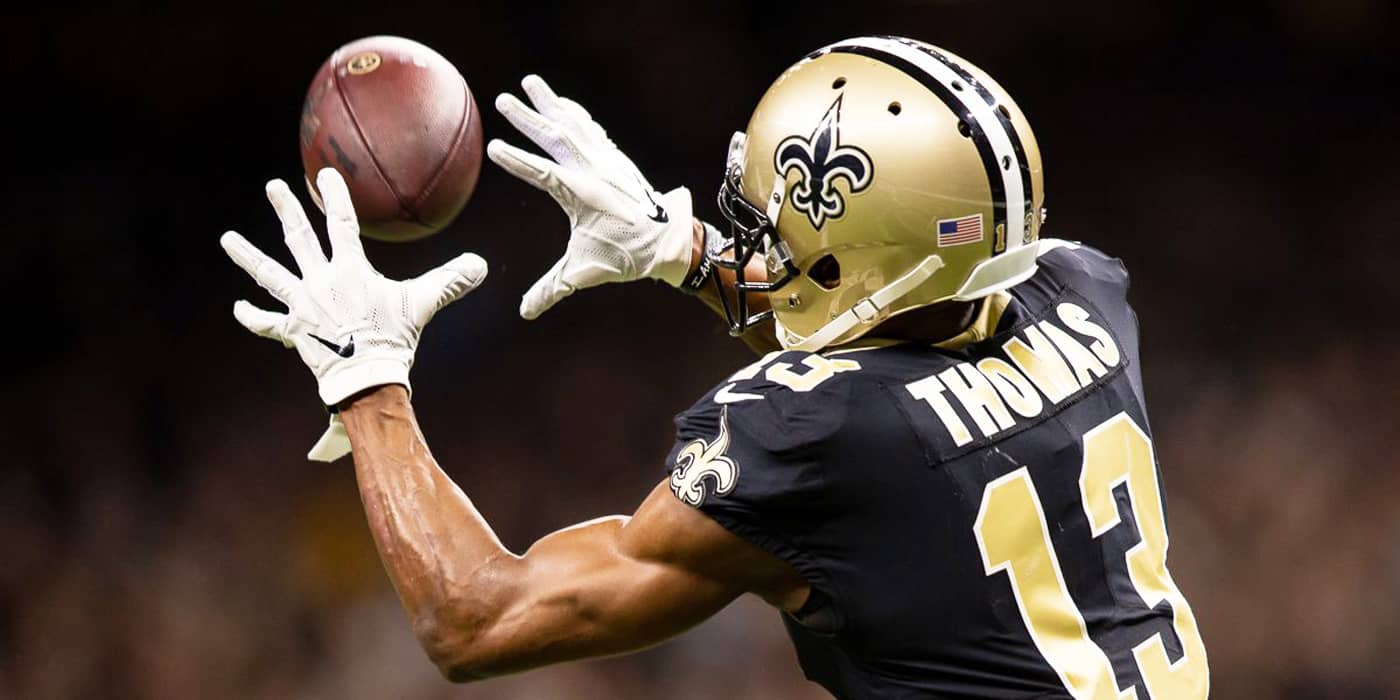 With the 2020 NFL season in the books, we dynasty owners are already excited and getting prepared for next year. There truly is no off-season in dynasty fantasy football. We’re about two months away from the 2021 NFL Draft and this can be a great time to make some dynasty trades. I’ll be touching on twenty different players to sell high and buy low on your dynasty rosters before the 2020 NFL Draft. This time before the NFL Draft can be crucial to buy and sell the right players, as the new batch of rookies will bring all sorts of hype around, per usual. Here are ten players that I’m looking to sell high on over the next weeks.

The first guy that I’d be looking to sell high on is arguably one of the best wide receivers in the league, Michael Thomas. The latest update that we’ve gotten on Drew Brees is that he’ll retire after the 2021 season, but obviously that could change. Thomas has fallen off a good amount since being the consensus WR1 in just about any dynasty rankings out there. Some sites still have him as a top-five dynasty wide receiver, while others have him lower. For reference, FantasyPros has him at WR9 right now. If I own Thomas I’m using this time to sell him high for a younger wide receiver and then some. You can likely get a younger wide receiver like Chris Godwin or Terry McLaurin and something for Thomas. If you’re competing to win now, you might want to just hold onto him, but I’d consider shopping him around while his value is still as high as it is. There are definitely still owners out there valuing Thomas as a top three to five wide receiver.

The next name I’m looking at selling high on is Aaron Jones of the Green Bay Packers. Jones has put up two elite fantasy seasons in a row, finishing as the RB2 in 2019 and RB5 in 2020. Historically, running backs tend to pick for two to three years and we’ve seen many running backs fall off after signing a new deal with a new team. Jones is a free agent and the cap situation in Green Bay is not ideal. They also drafted AJ Dillon last year in the second round and it appears they want to get him more involved. They’ve also got Jamaal Williams who is an unrestricted free agent and he hasn’t signed yet either. Williams has shown flashes at times and is capable of handling some work in the passing game. He’d be a much cheaper option for the Packers to resign, but the future is unclear for them both. With the future being unclear around Jones and the drop-off we tend to see in running backs, I’d be selling high on him where I own him.

Next up is none other than the best tight end in fantasy football for the last five straight years, Travis Kelce. He’s finished as the TE1 in PPR scoring every year since 2016 and as long as he’s on the field with Patrick Mahomes, he’s going to be an elite fantasy option. Kelce will turn 32 this year and is heading into his ninth season in the NFL and has had multiple surgeries throughout his career. If you are competing to win in 2021 and own Kelce, you’ll probably ignore him as a sell-high candidate, which is totally understandable. Personally, I’m using this time to sell high and get out before he drops off. He’s still the TE1 in many dynasty rankings meaning you could flip him for someone like George Kittle or Mark Andrews and something like a third-round pick. Regardless of how you feel, it’s worth considering with his price tag still being what it is.

This next one is mainly for Superflex and 2QB leagues, but there are some deeper leagues where quarterbacks tend to get valued more than typical 1QB leagues. Carson Wentz is officially out of Philadelphia and headed to Indianapolis. This means that for the time being, Jalen Hurts appears to be the guy for the Eagles. With the way quarterbacks get valued in these Superflex and 2QB leagues, you might be able to get a huge return on Hurts right now. I’m not sure if the Eagles are even sure that Hurts is the future of this franchise, and I’d use this window to sell high on him.

David Montgomery is coming off a nice season where he finished as the RB4 overall. The Bears lost Tarik Cohen in Week 3 against the Falcons with an ACL tear. Cohen is under contract with Chicago until 2024, so he really isn’t going anywhere. In Cohen’s first three seasons with the Bears, he saw 71, 91, and 104 targets out of the backfield. Cohen isn’t an overly productive guy in fantasy football, but he’s not a bad Flex option in PPR leagues and may end up being someone worth buying low on. Montgomery looked good and is going to be the lead back in Chicago, but with Cohen back his volume is inevitably going to decrease. More than likely you won’t be getting this kind of production consistently out of Montgomery, and with most owners buying in, I’ll be looking the other direction and selling high. Montgomery isn’t elite in any certain aspect, but he’s just solid all around, even in the passing game. He is likely looking like a solid RB2 option for the foreseeable future, but after finishing as the RB4 overall, you might consider selling him high.

After an amazing playoff run by Leonard Fournette, now might be a good time to consider selling high. Fournette joins Terrell Davis and Larry Fitzgerald as the only three players to score touchdowns in all four games of the playoffs. Fournette showed flashes at times, but with recent reports about Fournette not wanting to split carries or potentially getting cut earlier in the season, I don’t think Tampa Bay is a long-term home for him. Ronald Jones looked explosive this year and missed some time due to injuries where Fournette stepped in. I’m not sure either of these running backs is the answer for the Bucs offense, as Tom Brady looks like he desperately needs a pass-catching back. I’m using this playoff performance from “Playoff Lenny” to try and sell high where I can.

One of the higher valued rookie wide receivers of this 2020 class ended up being Chase Claypool, which was a bit surprising. Claypool had a few big games including a four-touchdown performance in Week 5 against the Eagles. With the uncertainty around Ben Roethlisberger in Pittsburgh and the emergence of Diontae Johnson, I would try and sell high on Claypool. Johnson saw the majority of the targets in this offense and he likely will again in 2021. Whether the Steelers go with Roethlisberger or something big ends up happening and he’s no longer their guy, he’s fallen off for fantasy purposes and hasn’t been a QB1 since 2018. Claypool’s success was largely thanks to Roethlisberger, and I don’t see him getting near the consistent volume moving forward to justify where he’s being valued right now.

One rookie that is currently getting a lot of hype thanks to the uncertainty around the Packers backfield is AJ Dillon. Many owners are banking on Jones leaving and Dillon immediately becoming the guy in Green Bay. There’s a decent chance the Packers lose both Jones and Jamaal Williams in free agency, which would mean the Packers are almost definitely going to address the running back position. If one of Jones or Williams does in fact come back, Dillon’s upside is going to be limited. If they somehow keep Jones, Dillon won’t be producing for fantasy purposes for obvious reasons. If they did end up bringing back Williams and not Jones, it more than likely means they’re confident that Williams can continue to get it done in the passing game. We’ve seen Williams step in when Jones has missed time and even then, he gets involved in the passing game and some in the running game. Williams consistently gets around 40 targets per year despite Jones being an elite pass-catching option out of the backfield. The volume would almost certainly increase if Jones leaves as well. I’d sell high on Dillon with the owners banking on him being the future in Green Bay.

This last player I’m looking at is getting a ton of hype right now, and that’s Laviska Shenault. This is largely thanks to the signing of Urban Meyer. Shenault definitely showed flashes at times, but DJ Chark is still with the Jaguars at least until 2022 and just led the team in targets and yards with 93 and 706. Shenault’s current ADP and typical dynasty ranking doesn’t really show just how much hype he’s been getting. If you’re on fantasy Twitter, you’ll see tons of owners who are in love with Shenault. One recent trade I saw go down was Mike Eans straight up for Shenault. Obviously, this might be an outlier, but it’s worth mentioning. There are always some players that get this type of hype thanks to Twitter, and this is a perfect example of one that I’m using to sell high.

Generally speaking, rookie draft picks will gain more value as the NFL Draft comes around. Whether it’s high-end first-round picks or mid-range third-rounders, owners get so excited with rookies that they tend to overpay. I’m not saying to sell high right now, but be on the lookout over the upcoming weeks, and don’t be afraid to sell those picks for proven assets that can help you win now. Go back and look at your rookie drafts over the past couple of years and you’ll see tons of misses. You’ll also see those amazing picks like Justin Jefferson, but for the most part, these picks are wildcards.