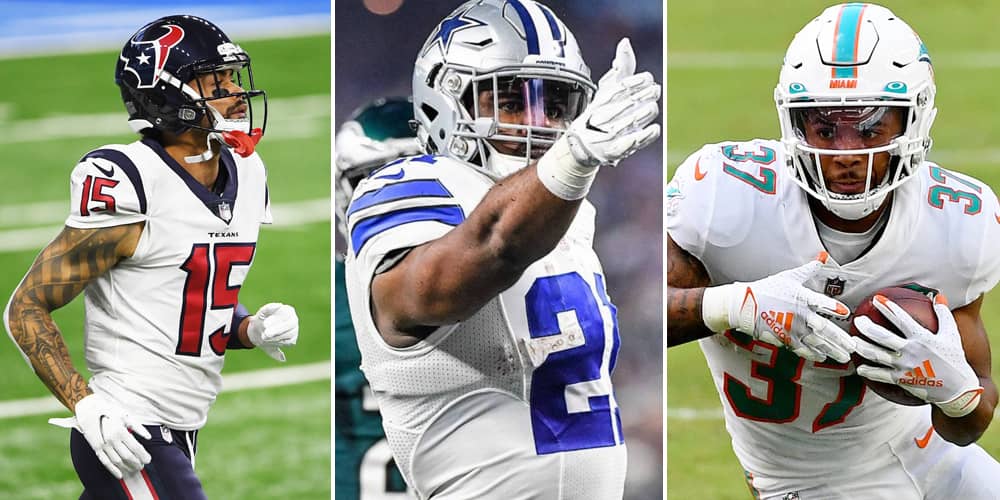 After touching on some players to sell high on in your dynasty leagues, I’ll now be looking at 10 players who might be worth buying low on as the 2021 NFL Draft approaches. Buying low on players is one of the best ways to add some value to your team and help you win. If you can buy low at the right time and sell high at the right time, you’re bound to win more games in dynasty football. Just like the stock market, buying low on certain investments can pay off in a big way. Here are 10 players that I’m looking to buy low on during the upcoming weeks as the 2021 NFL Draft rolls around.

I’ll start off with some high-end fantasy players and Ezekiel Elliott is the first guy I’m looking at potentially buying low on. Despite losing Dak Prescott and a fairly underwhelming season all around for Dallas in 2020, Elliott still finished as the RB9 in PPR this year. Elliott is coming off a season where he had career lows in more categories than you can count, including 979 rushing yards, 65.3 total yards per game, 4.0 yards per attempt, and 16.3 rushing attempts per game. Not to mention the lowest number of total touchdowns in his five years in the league. Obviously, these are all negatives and have tons of fantasy owners panicking. Elliott turns 26 this year, but he’s under contract until 2023 and as long as he’s in Dallas, he’s getting the bulk of the work and has low-end RB1 as his floor. This is his floor even without Dak Prescott as the starting quarterback, not to mention his upside in this offense when Prescott and this offensive line are healthy. While most owners are panicking and selling high, Elliott is quietly becoming a nice value right now and I’d gladly try to acquire him at his price.

One player that was a bit disappointing this year simply due to the hype he was seeing, is DJ Moore. Moore just had one of the quietest 1,000+ yard seasons out of a wide receiver we’ve seen. He caught just 66 passes, which meant he caught the fewest number of passes for any wide receiver that racked up over 1,000 yards this year. Moore finished as the WR25 in PPR leagues and while this isn’t horrible, it wasn’t good enough to live up to his ADP. Moore is entering his fourth season in the NFL and will be just 24 years old in April. He is very young and talented and is a nice wide receiver to considering buying low on right now.

Next up is the potentially former Texans wide receiver, Will Fuller. There has been some talk about the Texans potentially using the franchise tag on Fuller, but nothing has been made official yet. Last year, Fuller led all NFL wide receivers in fantasy points per target with 2.52 and he’s been showing us flashes whenever he’s on the field since his rookie season in 2016. FantasyPros dynasty rankings have Fuller as the WR35, and I’m buying him at that price before he gets signed and his value starts to jump up.

Curtis Samuel is coming off his most productive NFL season yet, after finishing 2020 with 77 catches for 851 yards and five total touchdowns, including two on the ground. He quietly put up a solid season despite being the third option in the receiving game to DJ Moore and Robby Anderson. Anderson took off early on in the year and Moore was more consistent throughout the year, while Samuel was more up and down throughout the year in fantasy production. Samuel has a nice skillset and could produce nicely as the WR2, whether he lines up on the outside or in the slot, he’s really just a weapon all over the field wherever he’s being utilized. Samuel is the WR46 on FantasyPros, behind Anderson at WR45. I’m buying Samuel all over the place and he’s cheaper to acquire than a wide receiver like Fuller might be right now.

One running back that was having a very solid season was the second-year back in Miami, Myles Gaskin. In his 10 games played this year, Gaskin was averaging 97.2 total yards per game before missing a few games thanks to a knee injury in Week 8. In Week 3 Gaskin began to see a heavy workload, getting 22 carries against the Jaguars. From Week 3 to Week 8 when his injury occurred, he was the RB15 in PPR scoring. Most owners probably aren’t banking on a seventh-round draft pick being the answer to the Dolphins backfield, but Gaskin looked great and was very efficient in the passing game as well, catching 41 of 47 targets on the year. Buy him now, because if the Dolphins don’t draft a running back fairly early, he’s going to see the bulk of the carries moving forward. His value will spike if they don’t draft a running back in April.

The fallout of Todd Gurley and his fantasy value has been crazy to watch, but he simply has not been good. He was not overly efficient and totaled just 678 rushing yards in 15 games. He also had the lowest yards per carry of any Falcons running back last year. That being said, he’s essentially being left for dead and may very well come back as the starter on this offense. If that’s the case he’ll likely be an RB2 by default, albeit with limited upside at this point. He finished as the RB29 in PPR last year, but he did average just over 10 points per game. FantasyPros has him ranked as the 51st running back, behind some names like Jeff Wilson, Rashaad Penny, and Sony Michel to name a few. The only running backs that are on the roster right now are Ito Smith and Qadree Ollison. I almost put Smith as a buy-low option, and if you’re not willing to pay for Gurley, Smith is almost free and might be worth stashing. Gurley is just too cheap right now and could be a decent Flex or RB2 in deeper leagues.

David Johnson is another guy who quietly had a decent season in 2020 and might be worth buying. Johnson just finished as the RB21 in PPR leagues in just 12 games played, averaging 15 fantasy points per game. The Texans have obviously made some questionable moves recently, but at the end of the day Johnson is their starter and he’s signed through the 2021 season. They just released Duke Johnson and their next rostered running backs are Buddy Howell and Scottie Phillips. Who? This means Johnson is going to get the bulk of the carries in 2021 unless they draft a running back fairly early, which isn’t likely considering they don’t have a pick until the third round. Johnson is older and is cheap enough now that the cost is definitely worth it, he’ll be an RB2 by default simply due to volume, with upside.

Next up is the pass-catching back in Chicago, Tarik Cohen. David Montgomery had a nice breakout season in 2020 but was really the only active running back for the Bears this year. He is obviously going to be the lead back, but Cohen has been the pass-catching back every year and still will be. He’s 25 years old and has seen 71, 91, and 104 targets in his first three seasons, averaging 9, 14.6, and 10.2 fantasy points per game in PPR leagues. Even if Montgomery is a solid fantasy option, Cohen is a decent Flex option in PPR leagues and has obvious additional upside if anything would happen to Montgomery.

I don’t normally advocate for buying 30-year-old tight ends, but right now Zach Ertz has essentially been left for dead by the fantasy football community. He’s ranked as the TE18 on FantasyPros dynasty rankings and his future is obviously unclear at this point. Ertz injured his ankle in Week 6 and we saw Dallas Goedert step up and he looks more than capable of taking the Ertz role over in this offense. At this point, I’m banking on Ertz to go somewhere like Indianapolis, Seattle, or to the Rams in Los Angeles. Ertz is still a very talented tight end and we see tight ends play several years into their 30s. Linking back up with Carson Wentz in Indianapolis would instantly increase his value. I’m buying low on Ertz while most owners are writing him off.

Next up is another tight end, this one for Tampa Bay who we always seem to be waiting on breaking out, OJ Howard. Prior to his injury, Howard was clearly the best tight end on this offense and Tom Brady was targetting him a nice amount. He averaged 2.48 yards per route run in 2020 which was good for 12th in the NFL. Rob Gronkowski meanwhile took a while to get going but averaged just 1.73. Howard was better in just about every metric last year and he’s still very talented and just 26 years old. An Achilles tear is an awful injury and be tough to come back from, but he’s still young enough and at this point, his pricetag is simply far too cheap. If you’re in Tight End Premium leagues, he can be a bit more expensive, but he’s still so cheap that you could probably offer a 2021 3rd round pick and many owners might be willing to take that. The reward far outweighs the risk at this point and he’s too cheap to ignore.